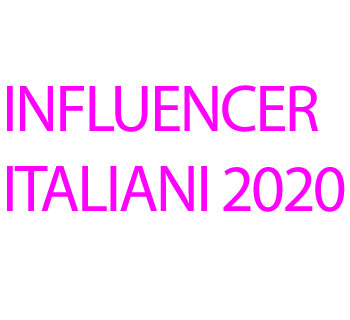 Influencer 2021: what are those most followed on the web and the emerging ones you will soon hear about. In the digital world, influencers are the real stars: they range from fashion to video games, from travel to beauty. Many of them started on Facebook, others on YouTube but they are also successful Instagrammers who follow the example of the greatest, such as Chiara Ferragni but also Giulia De Lellis. Who are the most followed in Italy? Let’s find out the list of the most successful ones, which even if they do not reach the numbers of the queen of global influencers Kim Kardashian, have nothing to envy to the American star married to Kanye West.

Khaby Lame it became one of the first in less than a year 100 influencers in the world. In Italy, he overtook stars of the caliber of Chiara Ferragni and Gianluca Vacchi. A former worker, he became famous by making video reactions without audio to other people’s videos. His funny faces and his creativity they brought him in a very short time to the podium of Italian influencers.

Clio Zamatteo, better known as Clio Make Up, is a make-up artist from Belluno who moved to the big apple several years ago, after graduating from the IED in Milan. In New York she follows her passion for beauty below and, under the advice of her husband Claudio, has opened a channel on YouTube. A choice that has proved successful given and considered that currently on Youtube has 1.28 million subscribers and on Instagram ben 2.7 million followers!

Close friend of Chiara Ferragni who advised her years ago to open a fashion blog, Chiara Biasi is a fashion and lifestyle influencer. She was engaged to Oscar Branzani and Simone Zaza, and is currently dedicated to his career. He founded a swimwear brand – Poisson d’amour – and is one of the most followed influencers in Italy.

She is the former partner of Gianluca Vacchi with whom she did the famous ballets on instagram and was also with the bomber Christian Vieri (now married to Costanza Caracciolo) and Giorgio Chiellini. She graduated in Economy and management, and is a world-renowned buyer while also dedicating herself to her work as an influencer with 2.3 million followers on Instagram. Gabriele is today engaged with Andrea Grilli.

Beatrice is one of the most popular influencers of the moment. Ludovica Valli’s sister has over 2 million followers on Instagram and is the model’s companion Marco Fantini: the two met in Men and Women and their love story drove the fans crazy.

He is a successful youtuber who boasts 2 million subscribers to its channel on the tube e 1.3 million followers on Instagram. He recently wrote his first book for Mondadori, entitled: “How to survive the scquola“.

Chiara Nasti is a very famous influencer who has become such since the age of 16. It has almost 2 millions of followers on Instagram, and is the sister of the former tronista of Men and Women, Angela Nasti.

Beautiful, simple and ironic: Paola Turani is a model, who works as a testimonial for many brands. On Instagram almost 1.5 million followers in his travels and in his fashion campaigns.

Roberta Carluccio is a fitness influencer with a past as a model and a present as a personal trainer. In his life he has walked for important brands such as Dolce & Gabbana, Roberto Cavalli, Adidas, Benetton. In recent years she has also landed on television: in 2017, in fact, she participates as a single temptress on Temptation Island and in 2019 she takes part in an episode of Ciao Darwin.

Has approximately 500 thousand followers on Instagram and 420 thousand subscribers on her youtube channel, Tess is a very famous actress for her sympathy and self-irony. He tells, in the video series “Melodramachic – unbearably woman”- the clichés attributed to women. She has a breezy character and is currently a successful influencer.

Chiara Maci is a blogger who has the passion for cooking. Clear she chose to leave her career in Rai to open a recipe blog, she has become judge at Cuochi e Fiamme and currently he is also dedicated to allhome decor and lifestyle.

Camihawke, born Camila Boniardi, is a successful youtuber and influencer who has recently also moved to the world of television by conducting, together with chef Carlo Cracco, the game show “In my kitchen: a recipe with Cracco“. Camihawke first broke through on Youtube talking about food, make-up and many other topics. He is also a successful influencer on Instagram: he boasts about 400,000 followers on Instagram (80,000 on Youtube).

Carlita is a sweet and Spontaneous influencer who matters about 250,000 followers on Instagram and beyond 450,000 subscribers to his channel YouTube. Carlitadolce deals, in its channels, with wellness, beauty, beauty and eco-bio recipes. In his life he has published two books and a shop opened in Quarto.

Misya’s recipe blog has over 400,000 likes on its Facebook page. Misya is a girl from Naples who has become a very famous influencer in the field of cooking. He collaborated with the magazine de The cook’s test and with Modern Woman.

The Rising stars – emerging influencers of the digital world – are rising stars of the nascent web that do not yet have exorbitant numbers in their channels but that already boast a huge following and that will soon become influencers of a certain importance.

Andrea Fratino after participating in La Caserma he found a lot of following and became one of the 2021 influencers. Andrea is from Milan and is also part of the Stardust House.

Alessandra Ventura is an up and coming Instagram star with approx 85 thousand followers. It considers itself influencer and content creator and it is already represented by an agency that also deals with other personalities from the entertainment world.

Barely 19, Denis Dosio is an emerging influencer who has gained fame thanks to participation in the reality show The college, format from which other well-known names such as Jennifer Poni, Nicole Rossi or Jenny De Nucci come out.

Ciccio Gamer was born as a video game expert on YouTube, where he has a very popular channel. From YouTube to Instagram the step is short: the influencer of the videogame world boasts about one and a half million Followers. Ciccio Gamer has two books published and is becoming one of the most followed influencers in Italy.

Stefano Guerrera he is famous for being the founder of the Facebook and Instagram page “If Paintings Could Talk”. But even his private profile – which has over 200,000 followers, has now taken off. Currently Stefano – who has already published two books – also deals with tech articles on his Instagram channel.

Paolo stella is a young Italian influencer who boasts over 300,000 followers on Instagram. He started with acting but he had real success on the web, from the opening of his blog OHMYBLOG in 2011, to become one of the most popular emerging influencers in Italy.