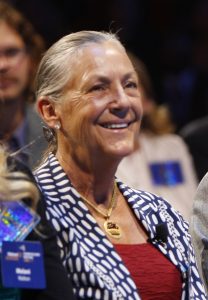 How rich is Alice Walton?

Alice Walton is the richest woman in the world. Her madness makes her indisputably one of the richest people in the world. But money alone does not make you happy. Alice Walton has neither a husband by her side, nor has she ever become a mother. The heiress of Walmart founder Sam Walton, who has since passed away many years ago, made headlines not only with her insane fortune. Rather, the wealthy entrepreneur allowed herself a serious misstep on the occasion of her 62nd birthday. She was driving a drunk car and was caught doing it. Despite her arrest, the facility has since been dropped. The cherished Alice Walton’s net worth is 57.96 billion euros.

Alice Walton – the richest woman in the world

As a shareholder in Walmart owns 10 percent of the group. The total assets of the Waltons are said to amount to more than 150 billion euros. This makes the Walton clan the richest family in America. At around 50.86 percent, the majority of Walmart’s shares are still in the hands of the family and not in the hands of investors. Since Alice Walton studied economics and finance herself, she definitely has a nose for business. Her other passions are horses. From 1998 to 2015 she lived on a ranch in Millsap, Texas, and actively bred horses there.

It can now be assumed that Alice’s residence is primarily concentrated in Fort Worth, also in the US state of Texas. Incidentally, Alice Walton never played a leading role at Walmart. She preferred to leave that to her brothers. However, as a stock analyst and stockbroker, Walton herself has worked in the private sector in the past. In 1988 she founded an investment bank, which only had to close ten years later.

Art and politics: a multifaceted life

In 2016 she did Hillary Clinton supported with a donation equivalent to a good 310,000 euros. Alice Walton was against Donald Trump, she would have preferred Hillary Clinton to be president. Before donating to the Hillary Victory Fund, Clinton and Walton had the opportunity to meet personally. They met when Hillary’s husband made her first lady of Arkansas. Walton came into contact with Clinton in her role as a board member at Walmart.

Alice Walton is now best known for her commitment to the arts. The Crystal Bridges Museum of American Art opened its doors in its home state of Arkansas in 2011. Alice Walton also has a penchant for art in her private life and spends part of her insane fortune on a truly impressive art collection.

The journal ARTNews has even said that Walton is one of the 200 most important art collectors in the world. After all, the Her private collection is valued at around 435 million euros. The collection can be seen in the museum she opened. These include impressive works by such well-known artists as Norman Rockwell and Andy Warhol.