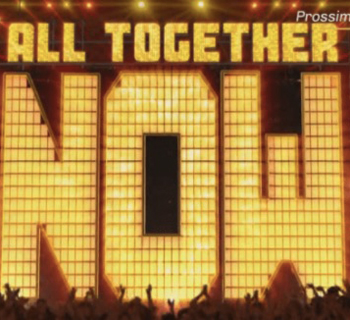 All Together Now aired from 4 November on Canale 5 is a talent show hosted by Michelle Hunziker that confronts 12 singing contestants judged by a wall of 100 people and the special judges Francesco Renga, J-Ax, Rita Pavone and Anna Tatangelo. In the wall of the 100 also present the Donatella: the twins Giulia Provvedi and Silvia Provvedi. The prize for the winner is 50 thousand euros. The result of the wall judgment can be changed by the jury members.

Read Also: All Together Now 2021: Wall, Competitors and Bets

The winner of All Together now 2020 is Eki: the 33 year old from Jakarta who was playing in front of the Milan Cathedral burst into tears and knelt in emotion at the news of the victory.

All Togheter now airs from 4 November and will air for 5 episodes every Wednesday on Canale 5. The final episode will air on 12 December 2020.

In the second edition they were part of the wall: Anna Tatangelo (who went from wall to juror), Rag, Umberto Tozzi, Cristiano Malgioglio and Benji and Fede.

The jurors of the 2020 All Together Now program are: Rita Pavone, Francesco Renga, Anna Tatangelo