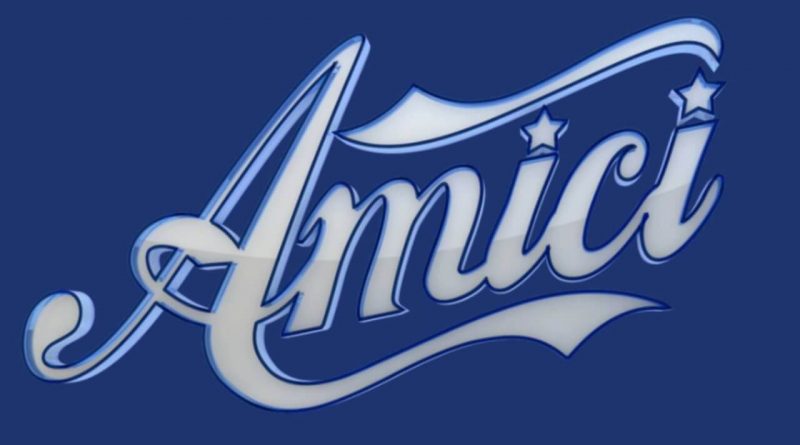 Friends 21 is the new edition of the talent show season 2021-2022 by Maria De Filippi where singers and dancers attend the training school of singing and dancing for win the final victory. Friends 21 it begins officially on 19 September 2021 with the formation of the new class. Amici for the first two episodes airs on Sunday, instead of Scenes from a wedding.

THE Amici’s official competitors 21, both singers and dancers, are:

Cristiano La Bozzetta is a dancer who was included in the school in December 2021, replacing Guido at the behest of the teacher Alessandra Celentano

Crytical is originally from Pescara, come in in the school by winning the match against Tommaso Cesana.

Cosmary is a Amici 21 dancer, is 21 years old and originally from Brindisi. Cosmary enters the school by winning the match against Virginia judged by the judge Rochelle Garrison.

Virginia is a young dancer, originally from Pompeii. He studied in Germany and has a very thorough classical technique.

Aisha is very young, she is 17 and takes the place of Simone who she manages to defeat by challenge.

Elena Manuele enters via challenge, the second time she challenges a pupil of the school. Elena is talented and already knows LDA, the two had come close during the auditions.

Andrea Siragusa enters the school through a challenge by eliminating the singer Ale.

Sissi is a singer wanted by the editorial staff, already known to the public for having participated in the ax factor.

Simone Russo is a singer who enters the school through a challenge, eliminating Giacomo.

Alessandra Ciccarello is a singer-songwriter who enters the school through a challenge, eliminating Elisabetta in mid-October.

Guido Domenico is a young ballet dancer, he enters the school through a challenge by eliminating the dancer Mattia.

Luca D’Alessio, aka LDA, is the son of Gigi D’Alessio and his first wife. He loves rap and trap music and already has some singles under his belt. His unpublished published are:

Flaza is a Rap Urban singer originally from Fregene, she has the single Piccola Peste to her credit and enters the school of Amici with a good success on social media. She is disqualified for disciplinary reasons.

Tommaso di Amici is a young singer-songwriter originally from Padua, he has an unreleased track record and enters the Amici school with his debut single Demodè. Tommaso is challenged against Elena Manuele.

Nicol, who calls himself Nicol without e, is a 21-year-old competitor of friends from Vicenza. Join friends to make his dream as a professional singer come true.

Inder is a singer who has conquered, with his flow, the bench in Amici’s school. He produces everything himself and is a “kamikaze” as Anna Pettinelli defined him, who decides to give him the bench. He is disqualified for disciplinary reasons.

Albe, whose name is Alberto, begins to publish his first unreleased songs on spotify during the lockdown. With a past as a deejay, Albe achieves some success on social media.

Alex, born Alessandro Rina is a 21-year-old singer, originally from Como. He studied music in London and Cambridge, supporting himself through various jobs as a bellboy and waiter. ready to show what it’s made of

Mirko Masia is a dancer from Allumiere, in the metropolitan city of Rome. With the dream of making dance his career, he was eliminated after a few episodes.

Christian Stefanelli, aka Turbo Jr, is an 18-year-old dancer, specialized in hip hop And breakdance. Originally from the province of Bergamo, his dream is to break into the world of dance. For some years she has participated in various national and international dance competitions, ed she is also a dance teacher in the mother’s school: The school of dreams.

Carola Puddu is a 20-year-old dancer, originally from Sardinia. After studying at the Paris Opera School of Dance and the National School of Dance in Canada, she is officially one of the dancers on the program.

Serena Carella is an 18-year-old dancer, originally from Cerignola. Her dream of becoming a professional dancer, and of establishing herself in the world of dance, led her to participate in the selections of the most famous school in Italy. Serena Carella is officially one of the dancers of the school of Friends of Maria De Filippi.

Luigi 20 years old, is messy and he can’t stand the people who command him. It shows up with an electric guitar, he never studied singing but he studied guitar and music theory. Brings one of his pieces from the title I live. Enter the school with Rudy Zerbi.

Rea is an 18-year-old singer-songwriter, originally from Bologna. With his unpublished, I only wish I could, convinces Rudy Zerbi to give her the counter.

Dario Schirone is a very talented dancer who was a student of Ballet teacher Veronica Peparini before joining the talent.

Giacomo is a singer of great sensitivity, an excellent interpreter who in school wants to find his way to start creating his own songs. He is eliminated by Simone Russo through a challenge.

Mattia is a pupil of Peparini, he dances hip hop and entered by challenge. He was eliminated in October by Guido.

Matt, whose real name is Mattias, is a pupil of Raimondo Todaro, who specializes in Latin American dances.

The first novelties of Amici 21 concern the professors: via Arisa (who has not found an agreement with the program to renew his contract and will instead be the protagonist of Dancing with the Stars as a competitor) and inside Raimondo Todaro.

The definitive dance professors are therefore: Veronica Peparini, Raimondo Todaro and Alessandra Celentano. We are sure that the Celentano teacher will play a central role again this year: in fact, everyone knows her diversity of views just with Raimondo Todaro, Amici 21’s new dance teacher.

As for singing, we have Professor Lorella Cuccarini as a singing teacher after she was a dance teacher last year. Its versatility is given by the long career in musicals that Lorella has faced. With her we find the confirmed Ruby Zerby and Anna Pettinelli

The cast of Professional Dancers of Friends 21 sees a welcome return and an exceptional new entry: we are talking about Andreas Muller (former winner of friends and boyfriend of Veronica Peparini) and of Giulia Stabile, winner of Amici 20 which will help young people on their journey. Instead Umberto Gaudino and Francesca Tocca will take care of the Latin American choreographies.The complete cast of Amici’s professional dancers is:

Of The Same Topic: