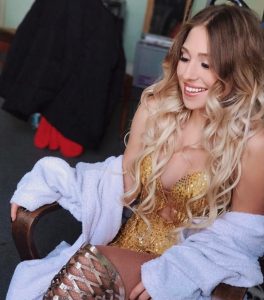 How much money does Bibis Beauty Palace earn on YouTube?

While children used to be Bibi Blocksberg fans, today Bibi’s Beauty Palace is more in vogue. Bibis Beauty Palace is one of the most successful German-speaking YouTube channels with around 6 million subscribers. Behind it is Bianca Claßen (formerly Heinicke), who opened it in 2012 and talks about topics such as cosmetics, fashion, lifestyle and personal matters in her videos. Bibis Beauty Palace regularly tops the list of the highest earning and richest YouTubers in Germany. Of course, taxes and fixed costs still have to be paid. You also have to consider this with your annual income, the income is still before taxes. The cherished Bianca Claßen, alias Bibis Beauty Palace, has assets of 5 million euros.

Bianca Heinicke was born on February 6th, 1993 in Cologne. She has a younger sister named Nadine, who was born on November 25th, 1996 and is therefore around 3.5 years younger. The mother of the two is called Hildegard and is also called Hilde. She is an educator, the father works in the field. Bibi did her Abitur at a grammar school in Cologne and then studied social sciences, although she did not graduate. She also studied at school Julian Claßen who she was in a relationship with since she was 15 and got married in September 2018.

He also runs a successful YouTube channel under the name Julienco and appears in many of Bibi’s videos. Bibi is also one of the YouTube millionaires, although she is still a long way from topping the list. But if your success curve continues to rise as it has before, a lot more is definitely possible. For Gronkh, Bibi’s Beauty Palace is a real competition when you compare their merits. In reality, the two are not competing with each other, each making YouTube videos on completely different topics.

The assets of Bibi’s Beauty Palace

Bibi’s income is made up of various areas and amounts to around 110,000 euros per month. In addition to YouTube, she also has various fields of activity with which she has built up her considerable fortune. We show how Bibis Beauty Palace did this!

The first video of Bibi’s Beauty Palace was uploaded in December 2012. In this Bibi explained a braided hairstylewhich, according to her own information, she could not find a tutorial. In doing so, she laid the foundation for her success as a YouTuber and, associated with it, for her fortune. At first, her videos were mainly about beauty and fashion, she published make-up instructions or gave tips on fashion. Little by little, private topics were also discussed and lifestyle videos were added to the repertoire. Since it was launched, Bibis Beauty Palace has uploaded over 670 videos, collecting over 2 billion views.

The channel already has almost 6 million subscribers. Bibis Beauty Palace has an average of over 45 million views per month. YouTube does not officially disclose how much you actually earn per 1,000 views, but you can assume a value between one euro and 2.50 euros per 1000 views. Thus Bibi earns around 60,000 euros a month through her views alone, and tends to be even more. The monthly Bibis Beauty Palace’s YouTube earnings are up to 70,000 euros and further increases the YouTuber’s net worth.

Bibis Beauty Palace uses so-called affiliate links on her YouTube channel as well as on her numerous other social networks, such as Facebook, Instagram or Twitter. These are links to products, from which Bibi receives a commission in the event of a purchase. On average, you can assume about six percent commission. With around 420,000 clicks on Amazon per month and a purchase rate of 2.5%, for example 22,000 euros per month for Bibi’s earnings added.

Bibis Beauty Palace has already cooperated with numerous companies and was able to earn a lot from it. For example, she worked with Gameloft and Telekom, advertised Always Ultra sanitary towels, and showed a Kodak photo app. Neckermann also benefited immensely from the collaboration with Bibi, while DM even had its own Beauty line called bilou brought to market by Bibi. Braun also launched an epilator with her face.

Together with her boyfriend, she founded the Julian Claßen & Bianca Heinicke GbRwho takes care of the promotional offers for you and your boyfriend. The company has been marketed by the Cologne agency Check One Two Perfect GmbH since October 2014. There are still about monthly 35,000 euros to the assets of Bibi’s Beauty Palace added.

4th Income from your own music

On May 5th, 2017 Bibi released her first song called “How it is (wap bap…)”. The video garnered millions of views in a very short time, but also set negative records. So the music video made it to the within a very short time Videos with the most “dislikes” on YouTube. However, this did not affect the success, because the song made it straight to number 9 in the German single charts. The musical excursion will bring Bibi some money into the till again.

Bibi has also been seen or heard several times in the cinema. This is how she appeared in the film “Potato Salad – Don’t Ask!” with and spoke as voice actress the role of Smurf Lily in “The Smurfs – The Lost Village”. In the film “Ritter Rost 2 – Das Schrottkomplott” you can hear Bibi as Princess Magnesia. We can certainly expect a lot more from Bibi in this area in the future as well. As a result, their wealth continues to grow.

Despite or because of the great success Bibi is often criticized. She was denounced by Jan Böhmermann, among others, for concealing advertising for minors. The young target group often does not have the necessary understanding to recognize the advertising as such. In addition, Bibi would take advantage of the relationship of trust to make money and increase her own fortune. However, she herself apparently has no problem with this type of advertising and confessed that nothing about it is objectionable.