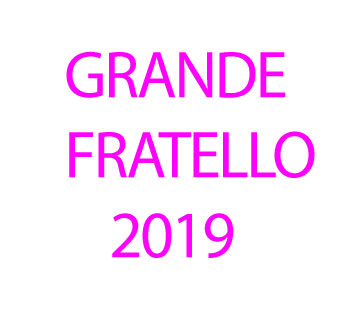 The Big Brother 2019 started on 8 April and ended on 10 June 2019, the competitors were in the most spied on house in Italy for 64 days. Now in its 16th edition, it was led by Barbara d’Urso, helped by the opinion leaders Christian Malgioglio And Iva Zanicchi. (Find out who are the competitors who have made the history of the GF).

Here are the competitors who took part in Big Brother 16:

Ivana Icardi is the sister of the well-known footballer Mauro Icardi, and participated in the Argentine Big Brother. Ivana and Mauro would not be on good terms, which Ivana has often talked about during the hosted in the afternoon television lounges. According to the footballer’s sister, the cause of the removal would be precisely Wanda Nara, wife of Icardi, who would manipulate it. Ivana is the fourth eliminated from Big Brother 2019.

Cristian Learned was the fifth eliminated of the edition number 16 of Big Brother. As a child he participated in the Canale 5 program “I sing“. He was considered a child prodigy but was often attacked for his physique. Lately the web would have moved some criticisms because of the surgeries to which he would have undergone. A video of his clash with Guendalina Tavassi has gone viral.

The winner of Big Brother 2019 was Martina Nasoni, a model and model just 21 years old, she was also the youngest competitor in the race. She suffers from heart ailments, precisely from hypertrophic cardiomyopathy. In fact, he had to undergo an operation and thethe implantation of a Pacemaker but his career didn’t stop. Martina Nasoni would be the woman who inspired the song Irama “The girl with the tin heart “, who participated in the Sanremo Festival 2019.

Francesca De Andrè is a face of the Italian show business. He made his debut in reality shows with participation to the famous Island 2011 and from there he began to frequent the major television salons. She has previously been engaged to Daniele Interrante, ex-husband of Guendalina Canessa.

Mila Suarez is a model who looks a lot like the beautiful Belen Rodriguez. She has previously been engaged to Alex Belli, the two lived together but their story ended in 2018, due to the alleged betrayals of the man. Currently Belli is engaged to Delia Duran.

Chicco Nalli – aka Kikò – is the columnist’s ex-husband Tina Cipollari. It’s a hair stylist well known in Rome and also appreciated by the television world. The Hai stylist has in fact participated in many programs: from No sooner said than done by Bianca Guaccero a Afternoon Five by Barbara d’Urso. The man met Tina Cipollari precisely to Men and Women, and the two together they have three children: Mattias, Francesco and Gianluca.

Alberico Lemme is a well-known pharmacist who is often hosted in Barbara d’Urso’s living room. The founder ofAcademy of Food Philosophy, is famous for creating a much-criticized diet, which takes its name: the Lemme Diet. Despite the criticisms, among Lemme’s customers there are prominent personalities such as Flavio Briatore.

Jessica Mazzoli is a singer who participated in XFactor and tried to join Amici as well. She is mainly known for being the ex of Asia Argento’s ex-husband, Marco Castoldi (aka Morgan). She and Morgan met at XFactor and then, together, they gave birth to their little Lara.

Serena Rutelli is the adopted daughter of the journalist Barbara Palombelli and the former mayor of Rome Francesco Rutelli. The girl admitted that she did not have a simple childhood and that she was abandoned first by her mother and then by her father, until she arrived in the family of the journalist and the politician. He currently works as a beautician.

Beautiful teacher originally from Sicily, Ambra Lombardo is a new and already much appreciated competitor of Big Brother 16. Teacher, graduated in Sciences of cultural heritage with a specialization in Archeology, Lombardo is also a model. In fact, one of his dreams in the drawer would seem to be that of looking out at the entertainment world. Ambra is single today and defines herself as a fussy, precise and “big-time” person: she will certainly give the boys of the house a hard time!

Beautiful model and personal trainer, Gennaro Lillio is mainly famous for sharing a few months of his life with the charming Lory Del Santo. Gennaro was also a suitor of Sonia Lorenzini, and won Mister Italia Forever in 2016 (competition in which Giulia Cavaglia, Flavio Barattucci also participated).

Art director, creative and Graphic Designer, Gennaro has a career now well underway and has collaborated, in the past, also with Fabrizio Corona. Beautiful and mysterious, Gaetano broke through the hearts of the fans.

The name will tell you something: in fact GianMarco is the brother of the charming ex tronista of Men and Women Luca Onestini. It is not his first time on TV: Gianmarco has entered the house of the Big Brother Vip 2 to warn Luca of the alleged betrayals of the now ex-partner, Soleil Sorgè. He was also a single tempter of Temptation Island. He is also a sports enthusiast, and can play guitar and ukulele.

Enrico Contarin is a trader who studied at the IULM in Milan, specializing in Communication, Economics and Marketing. On the web there were rumors about an alleged participation of the young man in a red light film, rumors later denied by Barba D’Urso.

Valentina Vignali is a basketball player, influencer and model. IS very famous on Instagram, where it has over two million followers. It is not an unknown face, on the contrary. In the past she participated in Men and Women, as a suitor of Francesco Monte and then conducted some programs on Real Time. She was engaged to the basketball player Stefano Laudoni (who would have betrayed her with “Bona Sorte” by Avanti Un Altro Francesca Brambilla). He is currently engaged with the photographer Lorenzo Orlandi.

Michael Terlizzi is the son of the former boxer and former competitor of the Island of the famous 2018 Franco Terlizzi. After his father’s participation in the Island of the Famous, the personal trainer was invited in several broadcasts, including Afternoon Five. The young man, who is also a graduate in philosophy, also participated as a tempter on Temptation Island.

Daniele Dal Moro is a son entrepreneur of a well-known member of the Democratic Party, Gian Pietro Dal Moro. Daniele works in a marketing and advertising agency and is a great lover of sports and video games. She occasionally works as a model, thanks to her beauty and resourcefulness.

Erica is one Calzedonia saleswoman who also works as an image girl. She has a steamy and feisty temper and has made herself known in the house for sharing some burning details about her alleged relationship with a woman.

Taylor Mega entered Big Brother late in comparison to other competitors. His entry was intended to wreak some havoc on Big Brother’s house.