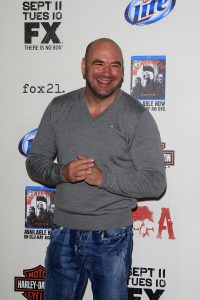 How much money does Dana White earn?

Dana White is known as the “Big Boss” and head behind the UFC (Ultimate Fighting Championship). In 2001, Dana White and the Fertitta brothers bought the MMA organization for $ 2 million. Under his leadership, the UFC became a multi-billion dollar company and he himself held 9% of the shares. A sale of the UFC to the talent agency WME-IMG in 2016 raised 4 billion US dollars. The 9% was worth $ 360 million for White in one fell swoop.

However, Dana White himself remained President of the UFC and signed a 5-year deal until 2021, where he currently raked in a 9% profit share, which corresponds to about $ 20 million per year. In 2019, the contract was prematurely extended by 7 years, whereby the President committed to the UFC until 2026. Owns extrapolated Dana White has an estimated net worth of around 450 million euros. Together with his old companions, the “Fertitta Brothers”, he also dreams of buying an NFL team.

Who is Dana White anyway?

When you hear the story of Dana White, you almost think of a Hollywood story. The boy started boxing at the age of 17 and kept his head above water with a job as a bellhop. At 19, however, he quit his job and wanted to achieve more and dedicate himself entirely to boxing. He fought himself, gave lessons to housewives, trained and managed other boxers, and hung out in boxing studios all the time. In the early 90s, however, he got stressed with the notorious gangster Whitey Bulger of the Winter Hill Gang in Boston, who suddenly demanded money from Dana and threatened him. In a flash, the young boxer fled to Las Vegas and started a new life without ever looking back.

Purchase and expansion of the UFC into a billion-dollar company

In Las Vegas, Dana White immersed herself in the world of MMA (Mixed Martial Arts) and developed a great enthusiasm for the versatile martial arts. Shortly afterwards he managed his first fighters Tito Ortiz and Chuck Liddell and let them fight in the UFC and later rise to superstars. Through his contacts in the MMA league, Dana caught in 2001 that the company behind the UFC (Semaphore Entertainment Group) had financial problems and wanted to sell the league.

Dana White saw the great potential behind the league and had big ideas on how to improve the UFC. He picked up the phone and contacted his old childhood friend Lorenzo Fertitta, who, together with his older brother Frank, set up the hotel + casino chain “Station Casinos”.

I think the UFC is in trouble and I think we can buy it. We should definitely buy them!

In January 2001 the Fertitta brothers founded the company “Zuffa LLC” together with Dana White and bought the UFC for 2 million US dollars. White himself held on to it 9% and was installed as president of the league. He was the genius who made the UFC brand internationally known and generated millions in income through pay-per-view tickets. Dana brought out superstars like Brock Lesnar, Conor McGregor, Nate Diaz or Ronda Rousey and marketed the fights like no other.

In July 2016, the UFC was sold to the WME-IMG agency for $ 4 billion. That was an offer the two brothers and Dana White couldn’t refuse. White’s 9% stake was worth a whopping $ 360 million. He also signed a five-year contract as President of the UFC, which gives him a 9% share of the company’s profits annually. The current earnings or salary amounts to around 20 million US dollars per year.

Meanwhile, the UFC is said to be worth around $ 7 billion due to a 5 year / $ 1.5 billion TV deal with ESPN. The big boss will also continue to benefit from this and increase his fortune vigorously.