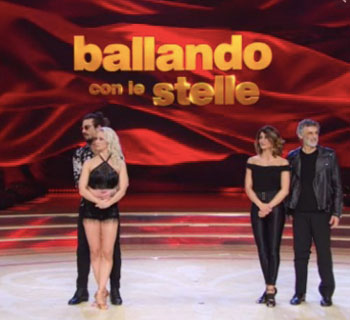 Dancing with the Stars 2020 starts on 19 September in prime time on Rai 1, keeping the programming day on Saturday evening. The 2020 edition of the dance talent which sees protagonists competitors known in the entertainment world boasts a cast very respectable with very special competitors who will be led by dance masters in the realization of the choreographies. The program is conducted as usual by Milly Carlucci.

The cast of the contestants of Dancing with the Stars 2020 does not disappoint expectations: characters from the world of entertainment from different sectors challenge each other with choreography led by professional dancers who will act as dance masters. Here’s the full cast:

Daniele Scardina dance with Anastasia Kuzmina. Daniele is a boxer, also known by the name of King Toretto is also famous for being the boyfriend of the beautiful sports journalist Diletta Leotta. We don’t know how much dance is in his strings, but it will certainly be interesting to see him struggling with this discipline. The 28-year-old is Supermedi weightlifting champion and lives between Miami and Milan to work and be close to his girlfriend Diletta.

Paolo Conticini dance with Vera Kinnunen. Paolo is an Italian actor, famous for having acted in numerous fiction and TV series. His predisposition for dancing and singing emerged when he was a competitor for another talent: Tale and Quali Show. Who knows if even in the dance he will make the same good impression made in the singing! Meanwhile, Paolo Conticini has just returned from a theatrical tour that saw him engaged in the musical Full Monty, so his return to TV is really in style.

Tullio Solenghi dance with Maria Ermachkova. Tullio was part of the comic trio composed with the late Anna Marchesini and Massimo Lopez for many years. The three have been a milestone of Italian TV with their shows and their comic representations. Tullio Solenghi has already participated, like Paolo Conticini, in Tale and Quali Show where he showed a skill in both singing and dancing. We are therefore certain that he will be able to make his contribution to the program.

Lina Sastri dance with Simone Di Pasquale. Lina is a famous Italian actress, who has been the protagonist of many films and television dramas since the 1980s. However, her theatrical training still leads her to be engaged in different shows that kept her partially away from the scene.

Ninetto Davoli (born Giovanni Davoli) dances with Ornella Boccafoschi. Ninetto is a historic Italian actor now seventy-one, he was a face of Italian auteur cinema. After having worked with Totò, with Pierpaolo Pasolini and in many other films, he also landed on television with various fiction including the one about Rino Gaetano, Romanzo Criminale and Un medico in famiglia. We do not know his preparation in dance, but his name is certainly one of the most prominent of all the cast of Dancing with the Stars.

Vittoria Schisano dance with Marco De Angelis. Vittoria is an Italian actress who is currently part of the cast of “Un posto al Sole”. His career began several years ago when he had not yet started his transition from man to woman. Vittoria is a very popular actress but we will discover her skills as a dancer only during Dancing With The Stars.

Rosalinda Celentano danced with Samuel Peron but given her positivity to Coronavirus, Rosalinda will dance paired with Tinna Hoffman. Rosalinsa is the famous daughter of Adriano Celentano: her participation as a competitor in the cast of Dancing with the stars was announced during Francesca Fialdini’s program. She was an actress but also a presenter, always present in the panorama of Italian spectacle faces. Openly Homosexual, she has been romantically linked to Simona Borioni for years.

Gilles Rocca dance with Lucrezia Lando. Giles is a 37-year-old actor, known to the public for having been on the stage of Sanremo 2020 as a sound engineer (work he practices in his spare time to help his father). He has participated in several TV series and television programs but this is his first experience in a talent show. We will see his skills as a dancer to the test! Gilles is engaged to the beautiful Miriam Galanti.

Antonio Catalani in art Holaf dance with Tove Villfor. Holaf is a famous world-famous painter: his training took place in Italy even though he lived overseas for many years. His beauty certainly does not go unnoticed: he is engaged to Caterina Zanardi Landi, countess of the Rivalta Castle where Fedez and Chiara Ferragni also spent time. We do not know if Antonio is a good dancer, what is certain is that he will be one of the “beautiful” of the cast!

Barbara Bouchet dance with Stefano Oradei. Barbara was the first official contestant of the announced cast of Ballando Con Le Stelle 2020. She is the mother of chef Alessandro Borghese as well as a well-known Italian actress and character from the world of entertainment. At the age of seventy-four she decides to try her hand at a completely new discipline that will see her as the protagonist of choreography and couple dances.

Elisa Isoardi dance with Raimondo Todaro. Elisa finished the experience of the test of the cook, launches a reality show that aims to consolidate her presence on TV. In fact, Matteo Salvini’s ex-girlfriend has not yet announced what her next program will be in place of “La prova del Cuoco”. Will she be good at dancing?

Alessandra Mussolini dance with Mykael Fonts. Alessandra goes from politics to TV and tries her hand at this dance program. Will she be able to dance with the dance instructors?

Costantino della Gherardesca dances paired with Sara of Vaira. Costantino is training hard and after losing weight in the last few years we are confident he will deliver a pretty good performance.

THE masters of Dancing with the Stars 2020 they are the same as in past editions. In particular, we also find Stefano Oradei and Vera Kinnunen after the controversy that aired last year with the end of their ten-year relationship due to her approaching competitor Dani Osvaldo. Raimondo Todaro was also present, fresh from the breakup of his relationship with the Amici dancer Francesca Touch.