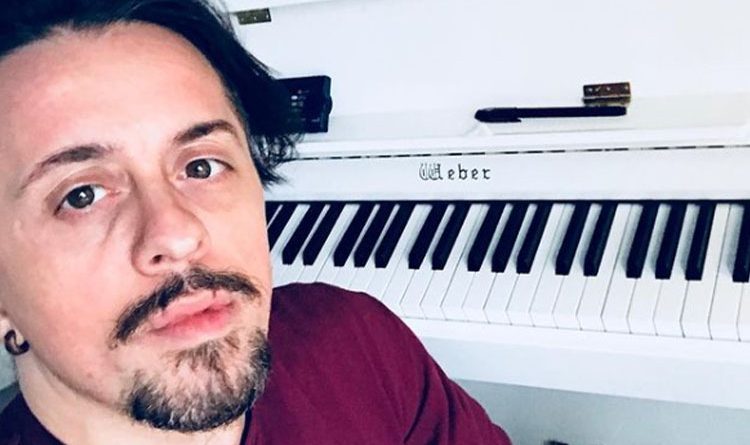 Dardust, pseudonym of Dario Faini, is a well-known 45-year-old Italian record producer, composer and musician. An excellent pianist, Dardust owes his fame above all to his work as a composer and producer, in fact he has produced famous pieces such as Money by Mahmood, Riccione of the journalists of Tommaso Paradiso, Magnificent by Fedez and Francesca Michielin (5 platinum discs). Fresh from the admirable performance a Sanremo 2021, Dardust recently produced the single All night long from Saint John, student admitted to the evening of Friends 20 by Maria De Filippi.

Who is it Dardust?

Dario Faini, known by the stage name of Dardust, was born on March 17, 1976 in Ascoli Piceno in the Marche region. Start studying piano at 9 years old, and is interested in pop and electronic music. The study and the strong interest in different musical genres are consolidated leading him to record his first album in 2000, with pseudonym of Dario Dust. He graduated in psychology in 2009 at La Sapienza in Rome, defending a thesis entitled: Humor and music listening.

Initially he composes, plays and sings with the Elettrodust group, then it is decided to pursue a career from soloist, author and producer. It becomes known in 2015, the golden year for the artist, who collaborates with artists such as Fedez, J-Ax, Ermal Meta, Marco Mengoni, Emma Marrone, Alessandra Amoroso and many others.

He has been present at the Sanremo Festival since 2012, as an author, among others, for Francesco Renga, and participates in it almost every year, until in 2019 the collaboration with the great friend Mahmood brings it to the top of the ranking: the very successful song is in fact the result of the collaboration of Dardust – Mahmood Money.

We saw Dardust at the last Sanremo Festival, both as a guest and as the author of 5 songs. One of the last pieces produced by the artist from the Marches is the song All night long di Sangiovanni, singer admitted to the evening of Friends 20.

Dario Faini recorded his first promotional album in 2000, under the pseudonym of Dario Dust. In the same year he founded Elettrodust, together with the guitarists Corrado De Paoli and Christian Regnicoli, the drummer Daniele Di Pietro, the bassist Jury Capriotti and the singer Paolo Romersa. The group wins the Italian Festival of emerging rock, e Dario wins as best keyboard player. 2001 sees them busy opening several concerts by artists such as: Manuel Agnelli, Elisa and Jimmy Somerville’s Afterhours.

Until 2003, the group sang in a foreign language, and then devoted themselves to the first project in their mother tongue, collaborating with Marco Forni. The group then continues to open great concerts such as those of: Vasco Rossi, Planet Funk, Morgan and Linea 77.

Dario Dust: career as an author

It is 2006 when the Universal Music Publishing offers Dario Dust a contract as an author, which the artist signs and which will make it possible for him to collaborate with Italian artists of all genres. In 2007 it is the first collaboration with Irene Grandi (Your words) and the first one arrives in the same year nomination for a David di Donatello for the music of the short film Dress!

From 2010 to 2014 the work as an author intensifies, and the compositions and collaborations multiply. He writes for and collaborates with artists such as:

In 2014 the artist decided to change his stage name to Dardust. The choice is a tribute to Ziggy Stardust (character of the homonymous song by David Bowie) and ai Dust Brothers, known to the public as The Chemical Brothers.

He made his debut as Dardust in 2015, with the album 7, the first of a trilogy that intends to cross the Berlin – Reykjavik – London axis, the cities that inspire, musically speaking, the artist. The first goes back to Berlin, while the second album of 2016, Birth, is entirely recorded in Reykjavik, in the studio owned by the Sigur Rós. In 2020 the trilogy ends with the album SAD Storm and Drugs.

Dardust: Success as an author

2015 and 2016 see Dardust engaged as an author for several Italian artists. Among the most famous passages we mention:

The year of consecration and success, which make it known to the Italian public, is definitely 2017 when the successes of:

The collaboration between Dardust and Mahmood begins in 2018. Together they write Black Bali for Elodie, Gué Pequeno and Michele Bravi. During the summer, the song was born from their collaboration Money, which Mahmood brings to Sanremo 2019, triumphing not only at the Italian Festival but also at Eurovision, where he ranks second but enjoying considerable success throughout Europe. The two publish another great success: Calypso, which sees the participation of Sfera Ebbasta and Fabri Fibra; to the success of this latest are added those of Barrio And Quick. 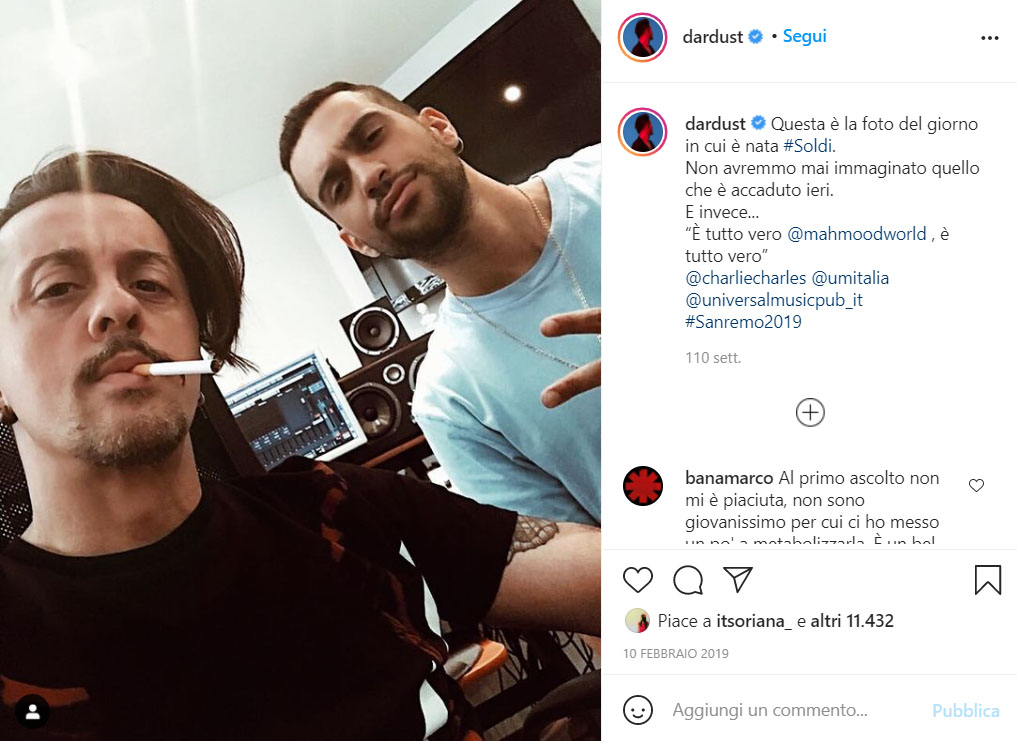 In 2019, the weekly Who, by Alfonso Signorini, has published photos of the two artists on vacation, assuming a sentimental relationship between two, denied in a sympathetic and sarcastic way by Mahmood.

In 2020 Dardust takes the stage in Sanremo: on the evening of duets, he accompanies on the piano, Rancore that sings together with the List Representative, Light (sunsets in the north east). For the Festival he is the author of the song of Rancore (Eden, which wins the prize for the best text) and for Elodie with the song Andromeda. 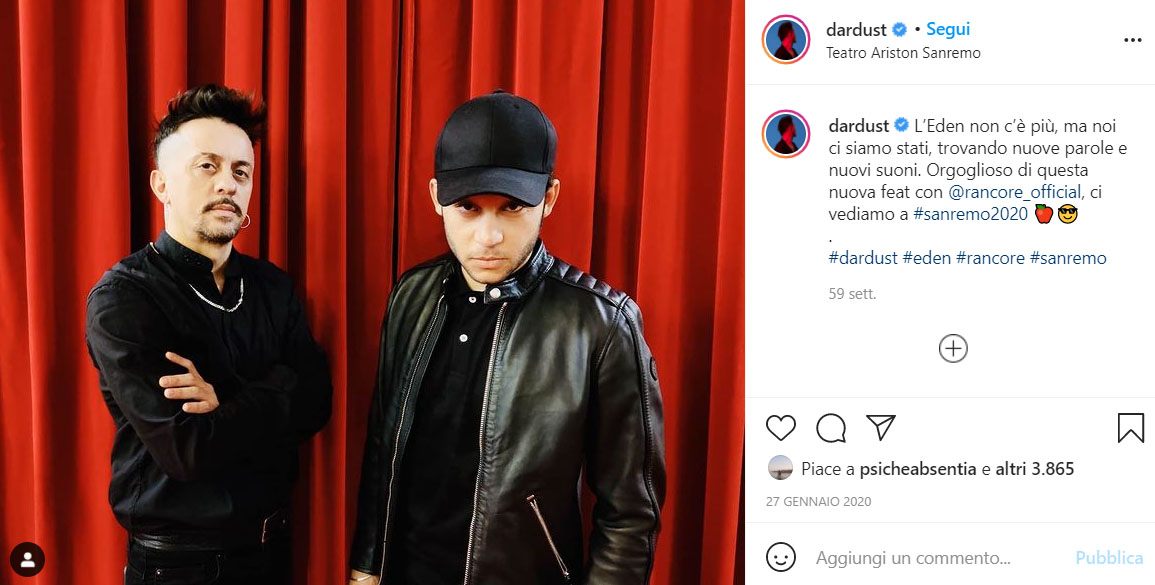 We “saw” him at the Sanremo 2021 Festival, with a breathtaking performance in which he gave the audience a rich and particular show. However, Dardust was already present at the Festival … in fact he wrote 5 of the songs in the competition, such as:

The single is released on July 15, 2020 Defuera, which sees the collaboration of Madame, Marracash and Ghali; the piece was recorded under the pseudonym DRD, which reflects the artist’s choice to throw himself into the most pop and direct production.

Dardust on instagram is very popular, has in fact 93.8 thousand followers, and he, very reserved about his private life, publishes only posts related to work and collaborations. 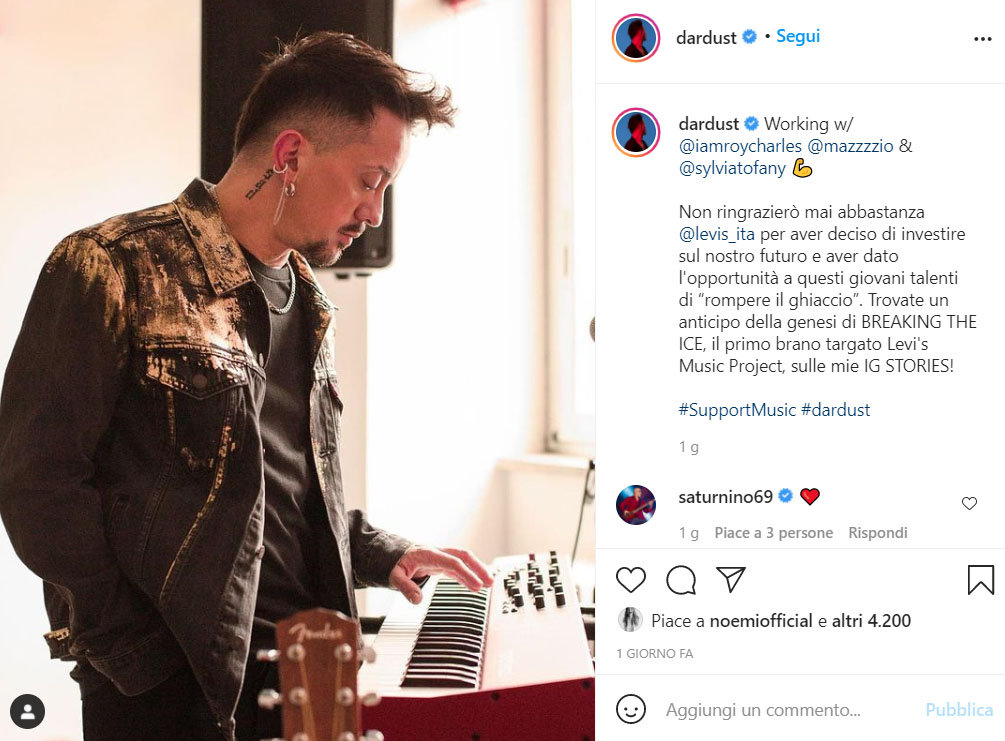 The artist has several tattoos on the body. The most obvious are:

Very jealous of his private life, nothing is known about this, in fact Dardust does not leak anything about it. The only rumor that concerned him was what he wanted him linked to the singer Mahmood, which he denied. The two are great friends and collaborators.

Here is the video of the song Sublime, of 2019. The piece highlights the styles that the artist loves and studies the most: electronic music and piano mixed with skill.