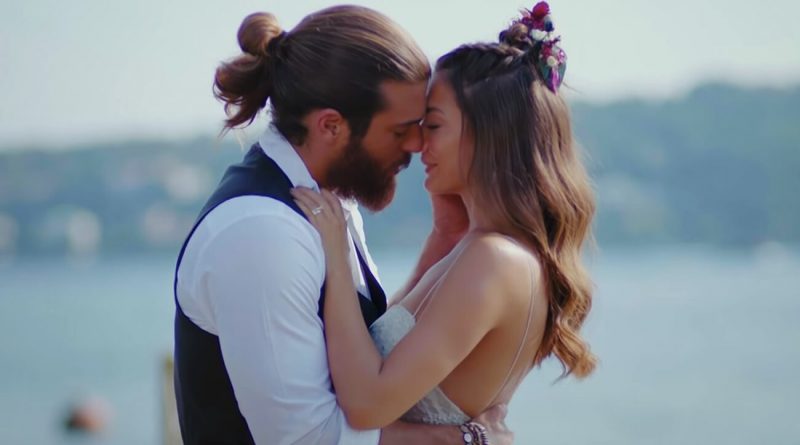 Daydreamer last episode that airs from 21 to 28 May 2021. The last episode of Daydreamer the wings of the dream in fact it has a duration of 2 hours and 20 in its original Turkish episode. On channel 5 it airs in about 6-7 afternoon episodes of 15 minutes. Below you will find the spoilers and the complete summary of the latest Turkish episode and the last Italian episode.

Daydreamer When Does It End?

L’last episode of Dydreamer is broadcast on Canale 5 from 21 to 28 May. Can (played by Can Yaman) has lost his memory and doesn’t know how he feels about Sanem (played by Demet Ozdemir). Spending time together the memory doesn’t come back, Sanem suffers and eventually decides to get away from Can, he realizes he has fallen in love with her again and declares that he does not remember but cannot live without her.

Sanem, after telling Can she mustn’t feel guilty about what happened to her after she left she didn’t want to kiss him, but she left.

The next morning Sanem leaves the estate after thanking Mihriban and telling her it’s best for her to stay away from there. Mihriban with tears in his eyes gives her the keys to the cottage, where he had lived up to that moment, telling her that this is always her home.

Sanem returns to her neighborhood where she is greeted by Mevkibe to which she says she has returned home. The mother hugs her happy, but worried, while Nihat is elated to have her close again. Leyla asks her why she’s coming back and Sanem tells her that at the moment she doesn’t care about the Agency or Can, that after all that has happened she is tired and needs to get away from it all.

Can is ready to go to the Agency ecLook for Sanem to go together, not seeing her, he goes to look for her at the cottage which he sees empty and closed. Arrived at the agency he looks for her, but she is not there and does not answer the phone. Everyone notes that he is very distracted and does not focus on the Agency’s problems. Emre arrives and tells him that Sanem has gone home forever and left the agency and the advertising campaign for her creams. Can, visibly perplexed, replies that he is very confused.

Sanem returns to live with Nihat and Mevkibe 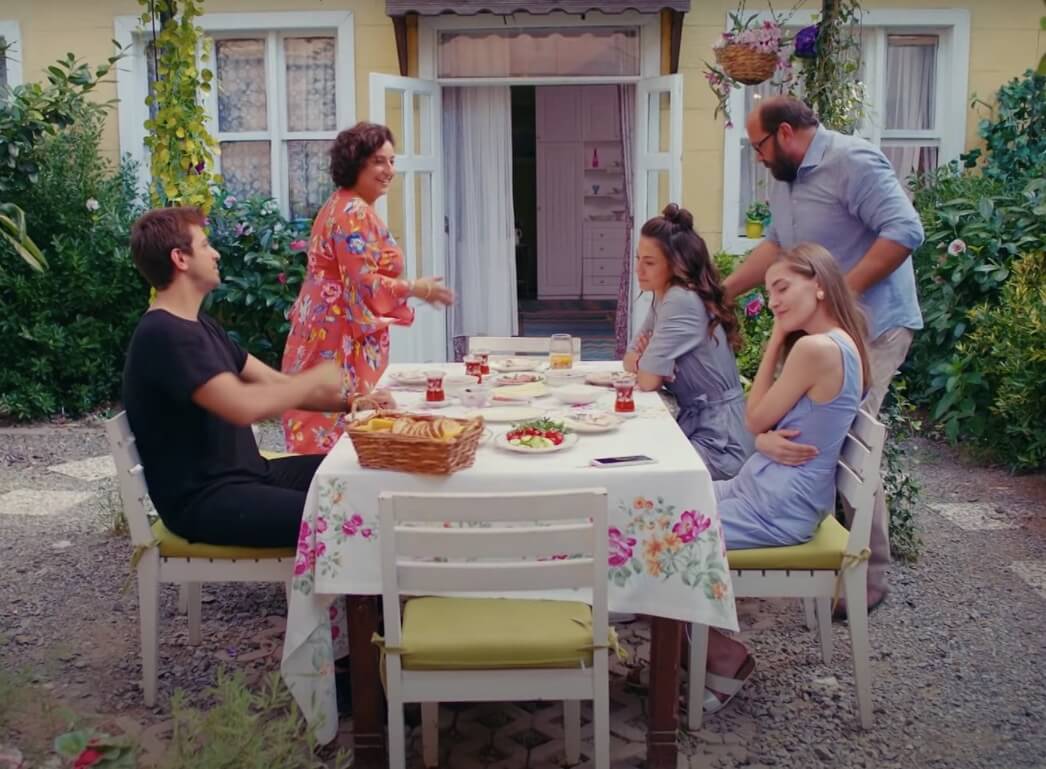 Sanem returns to live at home

Meanwhile Sanem tells his father that from that moment on he will take care of their shop as he once did. Sanem looks enthusiastic, but saddens when he thinks back on all the moments spent in that place. All customers and neighbors express their happiness for her return.

In the Agency there is a meeting with Aycha but Can’s mind is absent and immersed in his thoughts, he quickly puts an end to the meeting and leaves leaving his collaborators embarrassed.

Can joins Sanem at the store and asks her why she left. Sanem tells him that she is tired of trying to make him remember the past and that she has returned home to resume the life she had before. He adds that despite the efforts of both of them things didn’t work out between them and now everyone has to get on with their lives. So they both leave very sad.

While driving Can suddenly has memories of when they were together with Agva, while at the store Sanem cries remembering their moments together.

The next day Sanem and Nihat plan to expand their business by starting home deliveries, Sanem buys a moped and takes care of the deliveries that she carries out quickly even though she is often recognized as the author of a famous book and they ask her for an autograph.

Can and his collaborators go to the presentation of their work at the Aycha company, Can also here is very distracted and must be urged by Deren to make the presentation that is very successful with executives. Before leaving Aycha tells him that if he has problems they can postpone the climb, but Can replies that he will not go, to which the girl tells him that if he wants she is ready to be near him.

Can at this point goes to the cliff to reflect, at that moment Sanem passes by on a scooter that seeing him falls to the ground, Can runs to help her and wants to call an ambulance. Sanem refuses and pretends not to know him and to have lost his memory by falling. Clearly Can doesn’t believe her e they start bickering until she walks away screaming that she doesn’t know him.

The Feast of the Agency with Can and Sanem 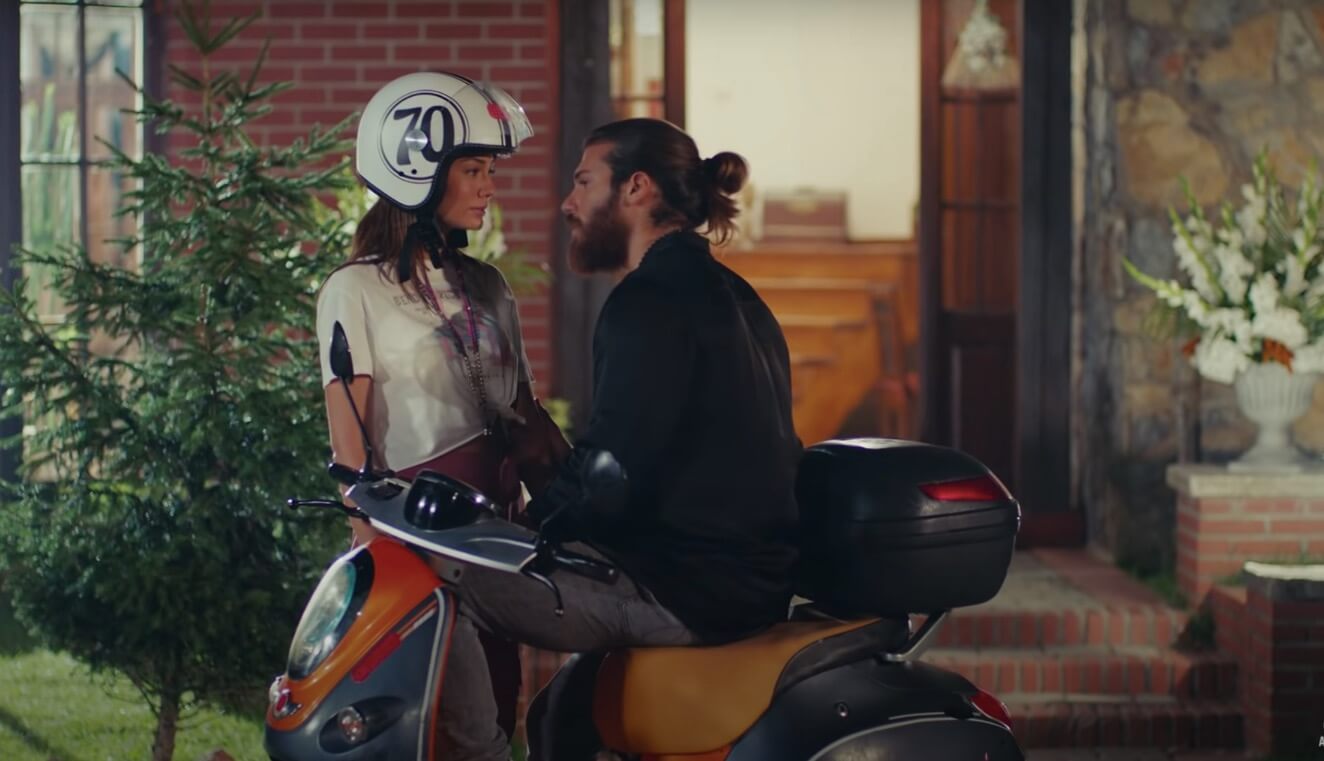 Can and Sanem on a moped at the Aycha party

Can goes back to the Agency and here he is joined by Aycha who announces that they have won the campaign assignment competition and invites everyone to a party to be held at his villa that same evening and that Sanem as the creator of creams will be the guest of honor. Emre asks Can to go and invite Sanem personally since he doesn’t answer the phone.

Can goes to the shop where Sanem’s parents are also present, the girl as she sees him rushes to intercept him to prevent him from telling them about the accident. Barely avoided the argument, Sanem refuses to go to the party saying it will be represented by leyla. On the way back Can calls Emre and tells him that Sanem will not be there and that she doesn’t care about the campaign and all their efforts to bring the creams to market. He adds that he too has suffered, that he is tired and that he wants to leave.

Leyla and Emre, very elegant, are ready to go to the party and Leyla complains to her mother about Sanem’s absence, while Mevkibe is very happy with the fracture that has been created between her daughter and Can, so much so that she would have been disappointed if he accepted the invitation.

It is evening and the party is taking place in the elegant villa of Aycha, who, as Can arrives, comes to meet him to welcome him, in that while Sanem arrives full of envelopes because he has received an order from that very address. The anonymous order was sent by Ceycey intending to get her to participate at all costs. Sanem, surprised and very embarrassed to be at an elegant party dressed in sports, comes presented and applauded by those present.

She wants to leave but is held back because by now everyone knows that she is the creator of the creams and she has to stay. Can when he sees her is very surprised while Aycha is annoyed. Mevkibe discovers that the delivery address is the same as the party and is annoyed that Sanem can meet with Can he calls her and orders her to go home immediately so she decides to leave. Aycha asks Can to walk away with her from the party e to go elsewhere together to spend the eveninga, Can refuses and leaves, reaches Sanem who is getting on the scooter and asks her to stay, but when Sanem asks him why he says he doesn’t know how he feels. Sanem then tells him that in his heart he has a trace of her, but that it will soon vanish, that he is an albatross, but unfortunately he is not his albatross then he goes away leaving him more and more confused. 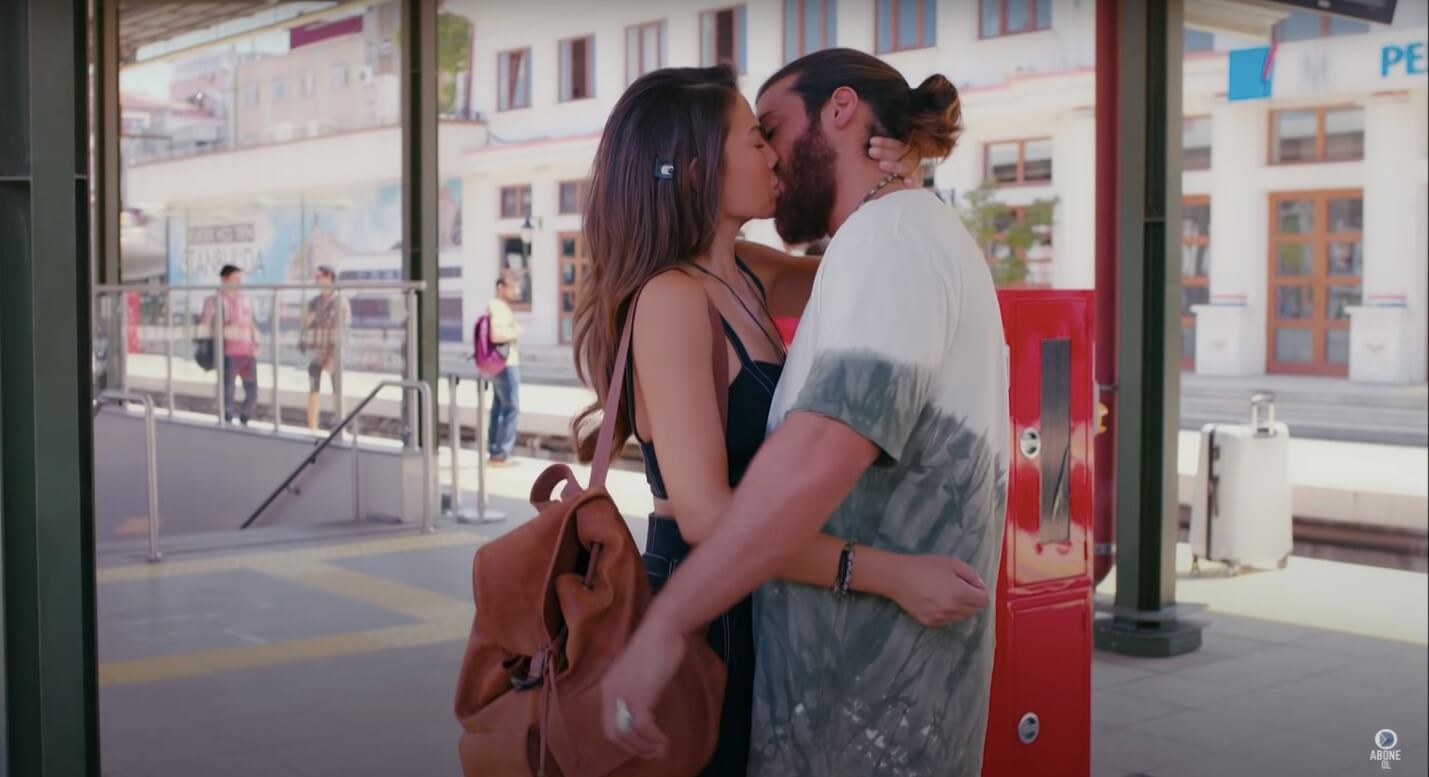 Can falls in love with Sanem again

Back home Sanem tells her parents who needs a vacation and will leave tomorrow. In fact, the following morning Sanem greets everyone and leaves, Ceven when he is arriving with the car he sees her get into a taxi and follows her. Arriving at the station Sanem is about to leave when Can comes running and asks her not to leave, that he does not remember her but that he has understood that he cannot live without her. He asks her to have new moments together and that he is a lucky man to have fallen in love with the same woman a second time. Sanem does not answer, looks at him and suddenly kisses him. Can and Sanem finally reunited and happy they spend the day in the park and Can tells her that he will fall in love with her continuously until the end of her life. Then, between kisses and cuddles, they organize their boat trip around the world.

Can recovers the memory 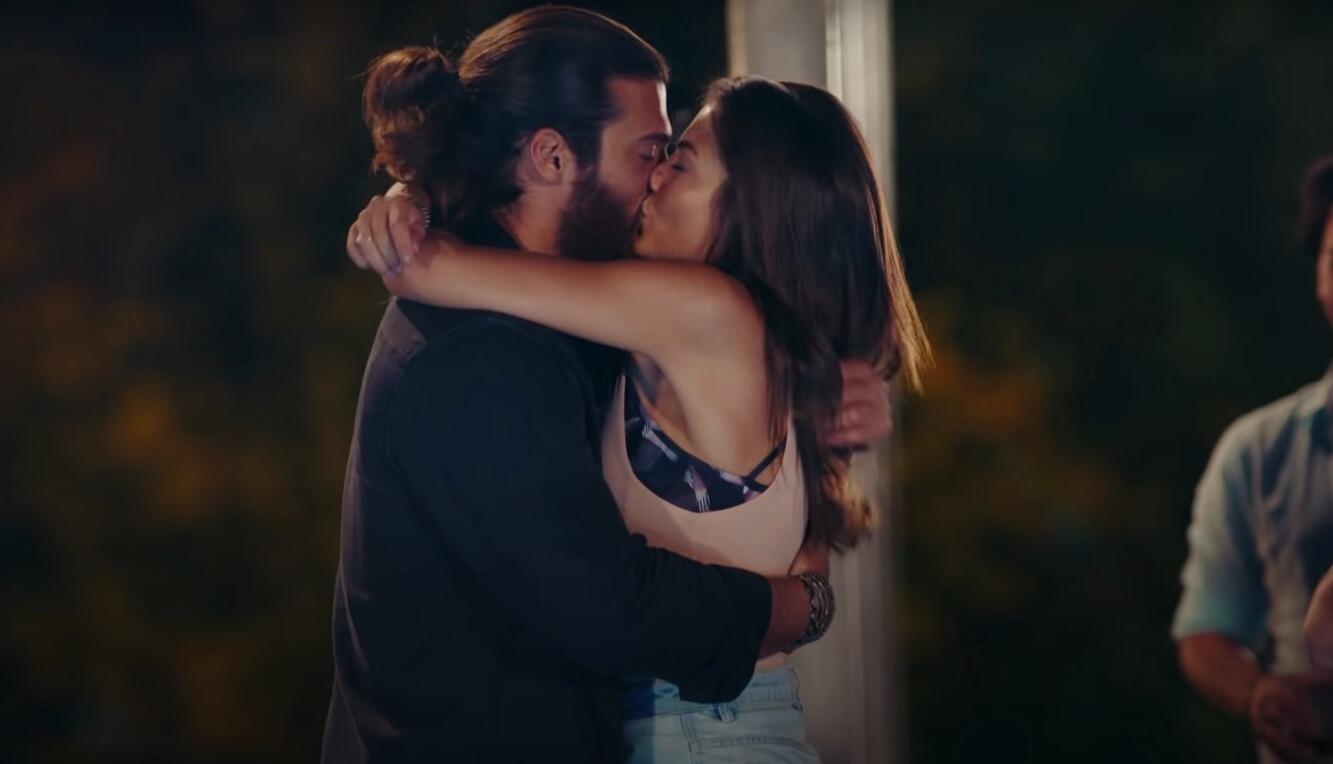 The engagement of Can and Sanem

The next morning Can, while having breakfast has several sudden memories of her life with Sanem for this he goes to the doctor with Emre. Here, after verifying the accuracy of the memories, he asks the doctor why his memory came back after falling in love with Sanem again. THEThe doctor replies that this love has caused a shock in his mind which made his memories resurface and concludes by telling him that his medicine is Sanem.

Back in the Can Agency he asks Emre not to tell anyone about the return of the memory because he wants Sanem to understand it by himself. After having fun provoking Sanem and make her angry invites everyone to his house for the afternoon to eat Kofte (raw meatballs)that he will do himself.

While Can at the estate prepares the meatballs assisted by Mihriban they all arrive and start dancing. Can prepared the meatballs by adding lots of hot spices and, once at the table, she wants Sanem to try them first, Sanem stops at the first bite for the spicy and above all for a sentence that Can says to her, the same one that she had told him when she had prepared them for him a long time ago . This fact Sanem had not written in the book so he understands that his memory has returned, very happy, she hugs him and he reassures her to remember everything. Can later asks Sanem to marry him and puts a beautiful ring on her finger and they finally hug each other happily amid the joy and applause of all.

Can and Sanem marriage and children 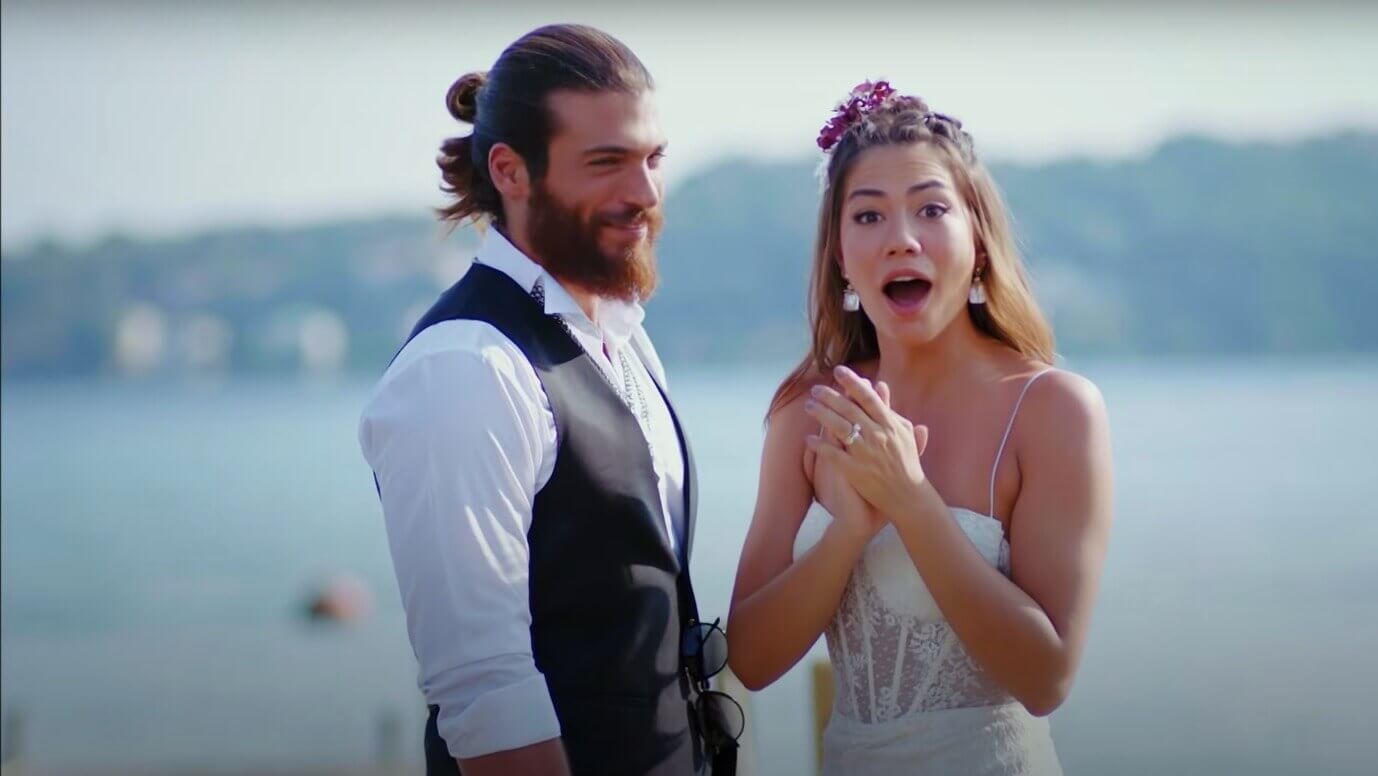 Can and Sanem wedding

The day of the engagement comes quickly which takes place at the Aydin house according to the traditions with Mihriban who, taking the place of Can’s parents, asks for Sanem’s hand. Nihat, happy with their reunion after all that had happened, he accepts immediately and the ritual of the rings is carried out. Can tells Sanem this is a happy ending, but Sanem tells him it’s just a beginning. On the wedding day, after the ceremony, Can and Sanem finally happy, accompanied by moved friends and family , they go towards the quay of the pier from which they will finally leave immediately with their boat to go around the world. Before leaving Sanem throws his bouquet which is taken by Mihriban.

There is a time jump that shows us a very agitated Can who accompanies a screaming Sanem into the delivery room who is about to give birth to their triplets.

The story ends with another time jump that makes us see Can and Sanem happy and in love in a garden while playing with their three children, two females and one male exactly as they both had dreamed of.

Home » News » Daydreamer Latest Episode: When Does It End? Spoiler and Final Summary