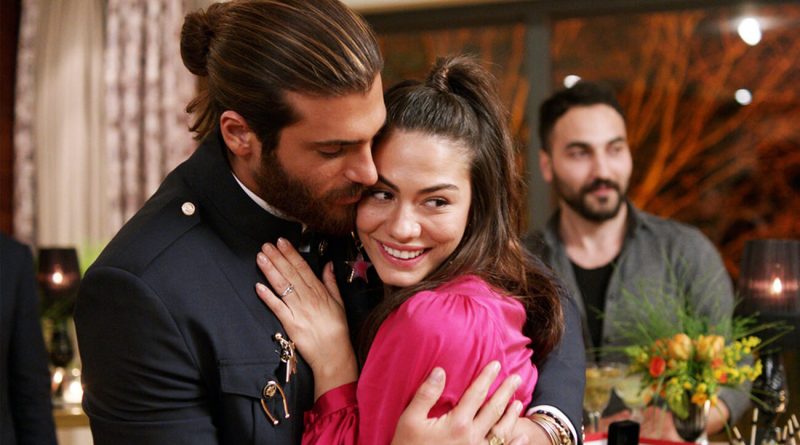 Sanem with great suffering she tells Can that her love for him has never failed despite the difficulties, while his love for her has vanished in an instant. As she is leaving Can stops her, telling her that the father she told him that she will find her love again only by being close to her, to which Sanem replies that it would have been better if it was his thought. (idea)

And then Sanem visits his parents and says that she is homesick and will stay with them for the night, Mevkibe immediately becomes suspicious and starts making her a myriad of questions to understand the situation between her and Can.

Meanwhile Can sgo to your doctor who tells him he’s fine and has no physical consequences from the accident, but that he needs a psychological help regarding memory loss. In fact, it often happens that the patient unwittingly does not want to recover his memory when it comes to recovering painful memories. The doctor concludes that it is best for him to try to remember everything that has happened to him.

Back in the Agency Can asks to Emre di Sanem and his admission to the clinic, he tells him everything that has happened and Can concludes that it’s all her fault and that’s why she can’t remember. Emre denies and tells him to read Sanem’s book because no one would want to forget in love like what he lived through.

At the Aydin Sanem talks to Leyla after dinner and tells her that Can can’t remember her and who fears that he may leave soon. At which Leyla tells her how Can asked Emr about herand that now he feels guilty, so he has to give him time because he is in pain.

After reading Sanem’s book, Can asks Deren to help him come up with a plan without telling anyone. In fact the following morning Deren instructs Sanem to go and see a location to use for an advertisement. Sanem arrives in a seaside town and goes to the hotel they have reserved for her, here she meets Can who offers to be her guide. Obviously they start bickering and Can reveals that he has read her book, at which Sanem realizes that that is a plan prepared to be with her, but he refuses saying that he will go to the beach to sunbathe and then return to Istanbul. On the Sanem beach after a while he begins to get bored and look for Can who arrives on a jet ski and invites her to visit a beautiful island nearby and she accepts.

Once on the island Can and Sanem are enjoying the sun and the landscape, Can tells her that the positive side of losing by heart lies in the chance to get to know her again, he continues saying that now he understands why he fell in love with her and that she is unique and approaches her to kiss her. Sanem, after a moment’s hesitation, walks away saying it’s time to go away. Can, when they are about to go he says that the bike has a breakdown so they will have to spend the night there, and Sanem begins to protest and complain.

Melihat, receives the news of having received a great legacy, euphoric starts giving gifts and working for free for her friends in the neighborhood, although Mevkibe urges her to be careful and wait for the money to reach her account.

On the island they think about dinner and Sanem takes charge of fishing, which he does after a myriad of funny attempts. Can, after having prepared a bed for the night, takes care of cooking, and takes a bottle of wine and glasses out of the container of the motorbike. Sanem at first refuses to drink, knowing full well the effect that alcohol has on her, but then accepts. They are sitting by the fire and Sanem, who is constantly drinking, asks Can for his favorite moment in the book and he replies that it is when she he found out he was the Albatros. After talking about it, they go to sleep. The next morning they wake up embraced as they always did in the past, Sanem is surprised and remembers nothing, then Can tells her that in the night she had woken up and had started dancing by the fire and had woken him up to dance together, to which she fears she has said so many stupid things. While Sanem takes a bath Can looks back on the night before when she said something very important to him, that is, that she was very afraid that he would die in the accident and that the only thing that matters is that he is alive even if he does not remember her.

Selim, who continues to court Humà, she gets Mihriban to give a lot of money to open a restaurant that will allow him to pay all the debts he owes to her, but Mihriban, who is very sad, tells him that he just wants Aziz to come back to her. Selim, which clearly is only interested in money when he goes away he telephones a woman, who calls love, telling her she is about to return and who has a lot of money with himthe. Later on attending Humà he learns that Melihat inherited a large fortune and immediately showed interest in the affair.

On the island the motorbike miraculously it works and then Sanem says that she understood that he did it on purpose to which Can tells her it was a good thing to be together and gives her the driver’s seat on the jet ski. Then, quickly back to the Agency called by Deren, they find an atmosphere very tense. In fact, everyone is worried about the possibility of losing the advertising of the creams in favor of a fierce competitor.

While Sanem is working thereand Can approaches and begins to behave very affectionately with her until Ayca arrives for a meeting, at the end of which she invites Can on a mountain hike to be held shortly. Left Sanem complains to Can that he accepted immediately, but he tells her that she will go with him.

Leyla is obsessed with the possibility of losing the job and looking for information on the competing group discovers that it is part of it an acquaintance of him Aysel, and decides to pretend to meet her casually to get some useful information. Not getting results, he follows her and photographs her in affectionate attitudes with a man who is not her husband. Leyla, then, la blackmails and Aysel is forced to hand her a key with all the information on the project that your agency has carried out, in exchange for compromising photos.

The following morning at the Leyla agency he opens the file on the PC to show it to everyone, but When Can understands that it is the result of an illegal action he refuses to keep looking at it, but having realized that it is a better project than theirs, he invites everyone to get to work and look for new ideas. Emre is very upset with Leyla’s behavior, which reminds him of Aylin’s and in fact when he asks her why she replies that she did it for success. TOEven Sanem is annoyed and tells her sister to work on new ideas instead of spying.

Can asks Sanem the reason why he made the creams and when she replies that he did it thinking of his mother, he has the idea of ​​creating an advertising campaign that has as protagonists the ladies of the Sanem neighborhood.

Everyone gathered at the Aydin home for the final preparations to shoot the commercial, Leyla apologizes to Emre for her behavior, while Selim courts Melihat, aiming for her money and declares his love for her.

While they are filming, he arrives Ayca asking Sanem to sign her copy of her book being a fan of hers, Sanem is surprised and happy, but then Ayca tells her that she recognized the protagonists and that she doesn’t understand how two people so different could have lived such a great love. Sanem remains dumbfounded, but is immediately recalled from the beginning of the filming of the commercial it is very popular with customers.

Meanwhile, on the set it is discovered that Selim is flirting with Melihat and Humà faints when learning him. At that moment Melihat’s sister arrives and tells her that the story of the inheritance is a fake, to which Selim, seeing that there is no money to cheat, runs away.

Humà, after this disappointment, announces to his children that he has decided to leave for Australia.

It is evening and Sanem, after consoling Mihriban who has discovered Selim’s dishonesty, goes to Can and finds him together with Ayca and a group of people with whom she is organizing a hike to climb mountains in India, she is surprised that Can tells her that she will go together with he. Then, after everyone has gone away, Sanem asks him in what role to accompany him, as a friend, girlfriend or whatever. Can is very confused and can’t give you an answer, then Sanem tells him he must not act because he feels guilty towards him and leaves, but Can turns to her, embraces her and approaches her face to kiss her. Sanem hesitates, but then she stops him by telling him that it is not necessary and that she does not want to kiss him.