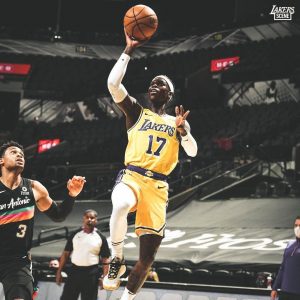 How much money does Dennis Schröder earn in the NBA?

Dennis Schröder is the German NBA star at the Boston Celtics. In the current season he only earns a salary of 5.89 million US dollars, but has already earned almost 75 million US dollars in his career. Of course, taxes have to be paid from the unbelievable NBA salaries and your own luxury life has to be financed. Dennis Schröder’s estimated net worth is $ 35 million.

The path to the NBA

The German was born on September 15, 1993 in Braunschweig and discovered by chance as a basketball talent at the age of eleven on an open space in Braunschweig’s Prinzenpark. He was invited to a training session of the professional club SG Braunschweig and convinced with his performance. So he was able to go through the entire youth basketball program.

At the age of 18 he already played in the first division team of the Phantoms Braunschweig and made his Bundesliga debut (BBL) in the 2011/12 season. In the following season 2012/13 he made it to a regular player and was awarded the titles “Best Young Player (U24)” and “Most Improved Player”.

Dennis signed up for the 2013 NBA Draft at the age of only 19 after the outstanding performance. When The 17th overall pick was made by the Atalanta Hawks in the first round selected and his dream of playing in the best basketball league in the world came true. As an aside, the point guard was automatically a multi-millionaire, because the 3-year rookie contract was already endowed with 4,802,280 US dollars + an option for a further year with 2,708,582 US dollars.

Since the level of the NBA is at a much higher level than the BBL, Schröder should first go through a little familiarization phase in the NBA D-League. After only six games, he returned to the Hawks during the 2013/14 regular season and already played in 49 of 82 games and got two playoff bets. In his second season he had fully arrived in the NBA, but was not yet one of the Hawks’ starting five. Shortly before the 2015/16 season, the Haws withdrew the option for another year in the rookie contract, which would have run until summer 2016.

Due to further constant achievements and many career records, he was offered a 4-year contract with a total volume of 70 million US dollars (including bonuses) in October 2016, of which 62 million US dollars were guaranteed. With this fat contract, the Hawks made the German a starting five point guard and replaced the outgoing Jeff Teague.

At the start of the 2018/19 season, Dennis Schröder was surprisingly traded to Oklahoma City Thunder. He was used as the “sixth man” in the team behind superstar point guard Russell Westbrook. In the second Thunder Season he was also used only behind the new point guard Chris Paul as the “sixth man” and still got a lot of playing time in the NBA, in which he showed consistently strong performances.

Salary with the LA Lakers

At the start of the 2020/21 season, the German point guard was transferred to the Los Angeles Lakers and played one season at the side of superstar LeBron James. The original 4 year contract was still in place and Dennis continued to get paid afterwards. After the move, he was able to integrate into the team straight away and was one of the Lakers’ solid starting five. But due to the rather poor performance in the playoffs and the high salary claims (at least 100 million US dollars contract volume) from Schröder, there was no new contract with the Lakers. He must have gambled away and the Lakers brought superstar Russell Westbrook from the Wizards.

The Boston Celtics signed Schröder for the 2021/22 season and paid the point guard a bargain salary of just $ 5,890,000. Whether he will get a big contract extension after the season or whether another NBA team will equip him with a big contract remains to be seen.

This is what Dennis Schröder’s previous earnings in the NBA look like: