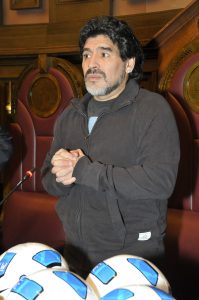 How rich was Diego Maradona?

After Diego Maradona was able to achieve numerous successes as a young star, he unfortunately missed investing his million-dollar fortune. His funds shrank enormously after he had a large back tax payment of 37 million euros to the Italian tax authorities in 2013. Until recently, however, he owned a property worth two million euros. On November 25th, 2020, the “Hand of God”, one of the best footballers of all time at the age of only 60, left this world forever. The treasured left behind Diego Maradona’s fortune was only 400,000 euros. The small inheritance will likely be shared among his five children.

How did Diego Maradona make his living?

Diego Maradona was born on October 30, 1960 in Lanús Oeste (Argentina). The village belongs to the Argentine province of Buenos Aires. His Career began at the age of nineafter he was discovered by talent scouts from the first division club Argentinos Juniors.

Even then, Diego Maradona was called a “golden boy”. He even won the FIFA Player of the 20th Century election. However, due to doping and drug problems in 2000 it was rather quiet around him. He even narrowly escaped death after taking a cocaine overdose.

Maradona is still worshiped as a god in his native Buenos Aires. In many other countries it is of course still considered to be Football legend. After all, his performance was remarkable. In 491 competitive games he scored 259 goals and from October 2008 to July 2010 he was coach of the Argentine national team. Because he is seen as a role model, his merchandising products sell very well. Numerous documentary films, interviews, screens, cups and films can be found on Amazon. In 2006 he also published his autobiography.

Diego Maradona as an advertising medium

Diego Maradona was the Brand Ambassador for Konami’s PES 2018 soccer video game, which is a direct competitor to EA’s FIFA. Besides, he was Partner of the luxury brand Hublot. In cooperation with Hublot, the company also created its own watch, the model name of which Big Bang King Power Diego Maradona reads. The dial bears the colors of the Argentine national flag. The value is up to 17,000 euros on the international market. From 1982 onwards, Diego Maradona had a partnership with the German sporting goods manufacturer Puma. Again and again he appeared in public with a Puma shirt.

Until recently, Maradona coached the club “Gimnasia y Esgrima La Plata” in the 1st Argentine League. His salary was allegedly based on what the club could pay, because Diego only wanted to help the club and not except it.

That Maradona has mastered this position, but he has already shown in the 2nd division of Mexico. The Dorados had catapulted Maradona from the bottom of the table to the top in 2018/19 and even brought them into the final in the promotion battle. He resigned from his coaching position due to health problems. In the time that followed, he was successfully operated on on his knee.

However, he failed as Coach for the Argentina national team in the 2010 World Cup. At that time Argentina was defeated by Germany in the quarterfinals. Shortly afterwards, he canceled his contract because he wanted to spend more time with his family. His fans had hoped that he would stay with the team.

In his final years his income per year was measured by the fact that he received a monthly sum from his advertising partners. He could also have been involved in the sales of PES 2018, which were gradually paid out. Despite numerous scandals, Diego Maradona is still considered one National hero. His death at the age of only 60 took the world by surprise.