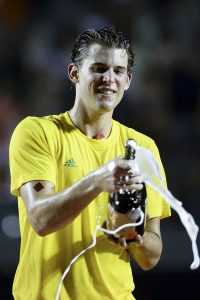 How much does Dominic Thiem earn as a tennis professional?

The Austrian tennis professional Dominic Thiem has been an integral part of the tennis world rankings for a long time. Due to his constant performance and victories of smaller ATP tournaments (500 and 250), he rose to the top 10 of the ATP world rankings before he was able to win his first Masters (Indian Wells) in 2019. On September 14, 2020, he won his first Grand Slam title at the US Open. Incidentally, he is only the third Austrian after Thomas Muster and Jürgen Melzer to climb into the top 10.

With a prize money of 28.86 million US dollars so far, Thiem also earns good money. In addition, there are now high-paying advertising contracts with Adidas, Babolat, Kia or UniCredit Bank Austria, Technogym and Red Bull. But all the money has to be paid for trainers, supervisors, managers and of course taxes. We estimate that as extrapolated Dominic Thiem’s ​​fortune at around 19 million euros. This does not come close to the tennis greats like Roger Federer, Rafael Nadal or Novak Djokovic, but the young Austrian still has a long career ahead of him.

A life in luxury? Nothing!

Anyone who thinks that Dominic Thiem is now indulging in every conceivable luxury with his fortune is seriously mistaken. Because the down-to-earth Lichtenwörther is very economical. “I really like to save,” Thiem said in an interview in 2017 with regard to the fact that after a tennis career, there would be a much longer life and that money would still be needed there. He also fondly remembered the time when he cost his family a lot of money. He himself has only been standing on his own two feet since 2013, so that there is finally enough money left over. Until then, his family has paid for training and travel expenses. Dominic himself said that at the time when he was traveling, he only picked the cheapest from the restaurant menus to save money.

In the meantime, however, he is in good financial shape and could afford one or two luxuries. But everyone defines luxury differently. Instead of expensive cars and a yacht, Thiem focuses on completely different aspects:

Dominic Thiem grew up in Lichtenwörth in Lower Austria and started playing tennis at the age of six. He has already competed in many international tournaments in junior tennis and won a few. In 2012 the professional career should begin with the first victories in ITF future tournaments. With wild cards for the Austrian ATP tournaments in Vienna and Kitzbühel, he was able to sniff the first ATP air. However, it would take until September 21, 2013 for Thiem to win his first ATP Challenger tournament in Kenitra and climb into the top 200 in the world rankings. In October of the same year he was able to move into the quarter-finals with his wildcard in the ATP 250 tournament in Vienna.

He has been an integral part of the ATP Tour since the beginning of 2014 and climbed into the top 100 of the tennis world rankings. With further good placements he was able to call up his performances again and again in the following tournaments. On May 23, 2015 he won a tournament on the ATP World Tour in Nice for the first time. In the same year he was able to shine with two more tournament victories in Umag and Gstaad (both 250 tournaments) on the World Tour.

In the year 2016 With further victories and great performances in the Grand Slams, Thiem made it into the top 10 of the tennis world rankings. He won three more 250 tournaments (Buenos Aires, Nice, Stuttgart) and for the first time a 500 tournament in Acapulco. At the end of the season he was also able to qualify for the ATP World Tour Finals.

The year 2017 Also started very well with his victory in the 500 tournament in Rio de Janeiro and the two finals in Barcelona (500) and Madrid (1,000), where he narrowly lost out to Rafael Nadal. The second half of the 2017 season was unfortunately completely forgotten for the Austrian with an injury.

2019 Thiem wins an ATP Masters (1,000) for the first time in his career. In Indian Wells he was able to defeat the Swiss Roger Federer in the final. (Prize money: $ 1,340,860). He was also able to win the 500 tournament in Barcelona. Shortly afterwards he was again in the final of the French Open and, as in the previous year, he had to admit defeat to Rafa Nadal again. The Austrian won the 250 home tournament in Kitzbühel for the first time in August and thus fulfilled a great dream. After this success, it should take until October 6th before he won his next ATP 500 in Beijing (prize money: 733,990 US dollars) and then triumphed in the ATP 500 home tournament in Vienna that same month (prize money: 474,295 euros). At the end of the season he was able to move sensationally into the final of the ATP Finals 2019, but had to admit defeat to Stefanos Tsitsipas.

2020 Dominic starts brilliantly with the finals at the Australian Open into the new year. However, he had to admit defeat to Novak Djokovic in his third Grand Slam final on February 2nd (prize money: 2.7 million AUS dollars). In the US Open, which was delayed due to Corona, the Dominator moved into a Grand Slam final again in September and was able to defeat Sascha Zverev in five sets. He took home $ 3 million in prize money. The tennis year 2020 ended again with the finals of the ATP Finals in London. However, Thiem was defeated by Medvedev and collected at least 550,000 US dollars. The superstar truly deserved the award for Austrian Sportsman of the Year 2020.

2021 is plagued by bad luck with injuries. The first major tournament that the Dominator played was the Masters in Madrid, where it reached the semi-finals (prize money: 106,690 euros). The French Open were to be forgotten!