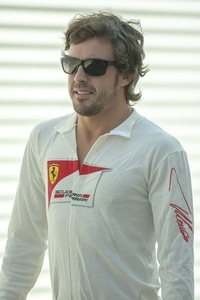 How rich is Fernando Alonso?

Fernando Alonso Diaz is one of the most successful F1 drivers with over 300 starts, 32 GP victories and 2 world titles, who ended his career for the time being at the end of 2018. His last engagement (2015-2018) was for the McLaren racing team. Alsonso earned 24.5 million euros per season in its heyday and additional millions through advertising deals (e.g. for the new Fiat 500). For a long time, he was the absolute top earner in Formula 1, ahead of Lewis Hamilton and Sebastian Vettel. Overall, he has one estimated net worth of 210 million euros brought. On November 25, 2018, Alonso ended his Formula 1 career for the time being, until he will return to the cockpit for the Alpine racing team in 2021, where he will be a Salary of 15 million euros relates. The racing driver is also very committed to the youngsters and runs his own go-kart track near Oviedo.

The career path: on the road to success right from the start

Alonso, born in 1981 in the Spanish province of Asturias, came into contact with karting as a small child, where his talent was already convincing. The fact that he was interested in motorsport at all is thanks to his father, who, however, was never a professional racing driver, but only viewed karting as a hobby. This passion should also arise in his son Fernando, whereas it manifested itself much more strongly in him than in the senior. He quickly drove his way up to Formula 3000which at that time was still the direct stepping stone to Formula 1 for many young talents and where it was discovered in 2000 by the legendary team boss Flavio Briatore. This gave him not only a place in the (then unsuccessful) F1 Team Minardi in the following year, but also in the longer term with Renault F1, where Alonso became the first Spaniard to win the world championship in 2005 and 2006.

After internal problems within the team (technical failures, problems of the team boss, realignment of the team), Alonso switched in 2007 first to McLaren Mercedes, then to Scuderia Ferrari and took over from Kimi Raikkonen prematurely, who, however, was still paid for one season. Although Alonso was able to clearly dominate his team-mate Felipe Massa in all seasons from now on, he was only runner-up in 2010, 2012 and 2013 because the technical package of the Reds could not stand up to the RedBull Racing team in the long term. With his salary of around € 20 million, he earned around twice as much as his team-mate Raikkonen.

From 2015 Alonso was back at McLaren and thus prematurely terminated his contract with Ferrari. Alonso’s successor at Ferrari was the German Sebastian Vettel. At the end of the 2018 season, the Spaniard ended his Formula 1 career.

Although the connoisseur immediately thinks of the two world championships he won in 2005 and 2006, heard Alonso’s time at Minardi as well. Because without the time at Minardi, he would not have been able to earn the great respect he has with all drivers and teams in the F1 world. Although Minardi always ranked at the bottom of Formula 1 at his time, Alonso managed to leave 5 cars behind in Japan in 2001 and finish in 11th place. This race is considered by connoisseurs to be one of the strongest races of his F1 career and prompted Briatore to take him to Renault F1, where he was in a much more competitive car.

With a former Annual income of over € 40 million you can of course afford a splendid property. It is nice, however, if you also think about your parents. Alonso, who was born in the Spanish city of Oviedo, did not originally come from a wealthy background. Bearing in mind the support he had received from his parents and, in matters of motorsport, especially from his father, he bought them a house in his hometown.

Incidentally, this also connects him with his teammate Jenson Button, who bought his parents a house in Villefranche, France (between Nice and Monaco). In addition, he bought a quiet property for himself, which, for the sake of privacy, is not in his native city, but in close proximity to it. Since he has been working professionally since 2010 in the Swiss city of Lugano stays where the headquarters of Scuderia Ferrari F1 are, he also bought his own home there during his time with the Reds in order not to have to constantly commute between Spain and Switzerland.

Fernando Alonso in the Ferrari