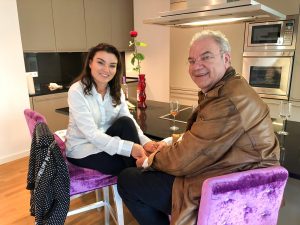 How much money does Karl-Heinz Richard Fürst von Sayn-Wittgenstein have?

It has not been long since the separation from his wife Andrea before the prince fell in love again. Now in November 2018 it became known that he met a brunette Polish woman through friends. Karl-Heinz’s new love is called Sylwia. The two of them show their love with joy and have now also publicly acknowledged each other. Karl-Heinz Fürst von Sayn-Wittgenstein’s new dream woman is a businesswoman from Poland. She is 19 years younger than the celebrity millionaire and has two children. In any case, we wish the lovebirds all the best for their future together!

The current prince was also drawn abroad. He lived in Australia for two years. He had previously completed an apprenticeship as an insurance salesman. As early as 1975, just three years after completing his training, he had the courage to start his own business. His agency was later sold and today’s prince worked as an auctioneer. From 1995 he earned his bread with the real estate business. Through the Purchase, renovation and subsequent sale of the propertywhich had now risen in value, the prince was able to rake in a good fortune.

But that was not the only smart move by the multi-millionaire. He recognized the potential of the Internet as early as the late 1990s. The entrepreneur secured a good 30,000 domains at this point in time. He leases many of them to this day and makes a lot of money. Also the Gym chain Royal Body Concept SA is now at least partially part of his empire. Sayn-Wittgenstein has teamed up with the children of Costa Cordalis for this purpose.

A not undisputed prince

The prince likes to be in the spotlight. Because he was seen on TV early on. Two seasons of “Der Immobilienfürst” have been shown on TV in the past and even in “Traumhochzeit” with presenter Linda de Mol the entrepreneur was once seen as a decoy. From “Secret Millionaire” to “Prince Heinz” to “Celebrities at the stove”, the businessman is already involved appeared on various TV channels. Whether RTL2, RTL or VOX, the adopted nobleman is not an unknown face to the TV audience. In the case of “Celebrities on Hartz IV” and “Celebrity Shopping Queen”, the not undisputed prince also showed that he is hardly embarrassed. Karl-Heinz Richard Fürst von Sayn-Wittgenstein is also a permanent guest at “Goodbye Germany”. In this program about emigrants you have seen other rich celebrities such as Konny Reimann, Michael Wendler or Daniela Katzenberger.

With his views and the sayings that he likes to knock on, the prince is quite offensive. The relationship with his wife Andrea, whom he married in 1993, also broke up in July 2018. So in his youth fate was kind to him, while he was not so lucky in love. The fact that the prince became noble at the age of only 7 was indirectly due to his poor grandmother. Because she worked as a cleaning lady in a butcher’s shop, where Bruno Lothar Fürst von Sayn-Wittgenstein liked to shop himself. After taking the little boy on vacation several times, he finally adopted him. Today’s prince himself says, however, that he is his I don’t want to pass on titles of nobility for any money in the world by adoption. He has already received many such offers, but always rejected them on principle. You can’t deny the millionaire a certain class.

The prince earns his living not only with television appearances, but above all by selling villas in Mallorca, Germany and Austria. He buys real estate, has it renovated and then sells it for a profit. Of course, he also owns a glamorous home. His Villa Colani in Santa Ponsa, Mallorca, has a living space of around 1,000 square meters. Plenty of space for five bedrooms, as many bathrooms with jacuzzi and dressing rooms. The villa also has a panic room and utility rooms. The garage has space for seven vehicles. There are also two pools there. Forbes named the property the most beautiful villa in Spain in 2013. The luxury estate of Karl-Heinz Richard Prince von Sayn-Wittgenstein is just as luxuriously furnished, the Prince loves gold and is a passionate art collector. Vases and sculptures made of Murano glass as well as works of art by the painters Ernst Fuchs and Paul Wunderlich are particularly popular with him. the Villa Colani will be worth 25 million euros estimated.