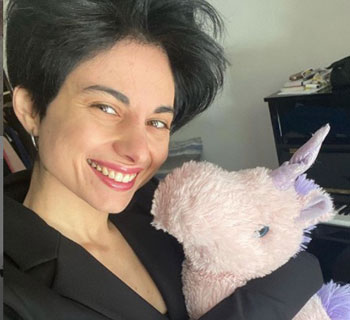 Giordana Angi is a singer-songwriter of French origins very well known in the Italian music scene. It boasts a collaboration with Tiziano Ferro, and participated in Amici 18, where he presented the song “Home“. Strengthened by the experience in the talent show, he participated in the Sanremo 2020 Festival with the song “Come Mia Madre”. From 15 May 2020 she is a competitor of Special Friends. Currently, the previews of the episode of May 22 reveal that Giordana will perform together with a choreography, but we do not yet know which dancer will accompany her on stage.

Who is Giordana Angi?

Giordana Angi was born in Vennes, in Brittany, in 1994 but since she was a child she has lived with her family in Latina, in Lazio. He is fluent in three languages: Italian, French and English. The singer said that one episode in particular made her take the path of music: she confessed to having dreamed Britney Spears and that since then he has understood that his world is the musical one. Despite her young age, Giordana Angi has already had many collaborations and has collected several participations in Italian singing competitions.

She has a punk and irreverent style, she likes them Bob Dylan, Beatles, ACDC and Mina. After arriving in Amici’s school of talents, in a well-known newspaper they reported that the young singer has an eating disorder but she has never denied or confirmed these rumors.

Giordana has almost half a million followers on Instagram. 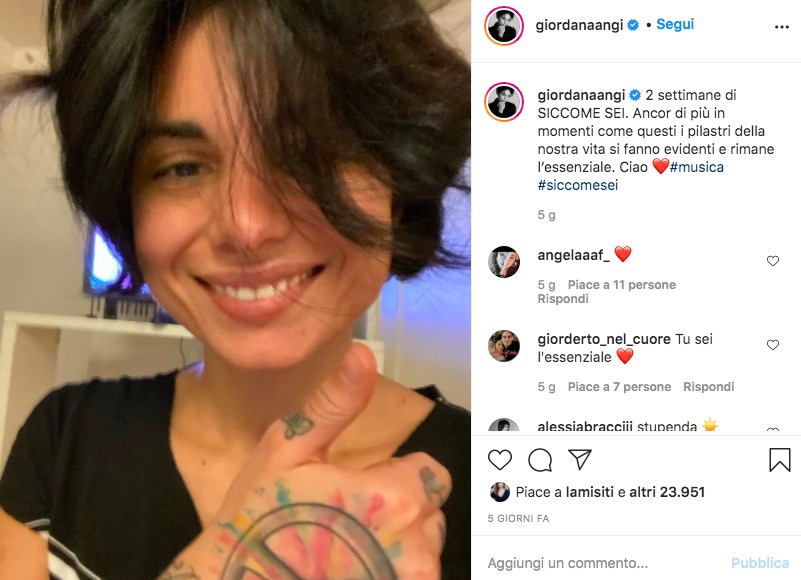 Giordana Angi currently works as songwriter. Her career in the world of music began at a very young age, when Giordana discovered she had aptitudes in the singing field but also in the field of writing. Thus, Angi begins to compose singles in three different languages ​​- French, English and Italian – and in 2012 he tried his luck in Sanremo. During his adventure at the Italian Music Festival, he presented himself with the song “unknown poem”And begins to get noticed for his talent. Although his television debut in Sanremo will not be very lucky – similar to what happened to his colleague Irama – Giordana will continue to pursue her goal. After her experience in Sanremo Giovani, in fact, Giordana Angi begins her collaboration with one of the big names in contemporary Italian music, Tiziano Ferro. In fact, it will be the latter who strongly believes in Giordana’s abilities. The two will start a project which, however, will be short-lived.

In 2017 Giordana Angi is the author of “Bam Bam”, Song that became the official theme song of the second edition of Lazio Pride. In the same year he released the single Love you (here and now) “. She writes, as co-author in 2018, “Without belonging”Played by Nina Zilli. But the turning point for his career comes with the participation in Amici, where he presents two successful unpublished works:

Subsequently he wins three gold records with the song “Hold me stronger” and “Home”.

Giordana Angi on May 12, 2020 he released a new single entitled “Love me now”, a song written by Giordana herself during the quarantine. As the girl said on Instagram: “It is a wish, a hope for me and for everyone that, loving each other individually, we can learn to love each other“.

Giordana Angi during Amici 18 did coming out, declaring that he wrote a song for his ex-girlfriend. At the moment Giordana would be single and is in fact very busy with her career, also crowned by having conquered the role of coach for the first edition of Celebrieties friends.

The former competitor of friends of Maria De Filippi Giordana Angi also participated in the Sanremo Festival with the song “Like my Mother“. During the evening dedicated to the covers he chose to perform in the song by Mia Martini “La Nevicata del ’56”. Giordana told that when she received the call from Amadeus who informed her that she had been chosen among the Big in the program, Giordana hung up the phone and stared at the wall for 20 minutes bursting with disbelief and happiness.

Giordana Angi was a competitor from Special Friends, broadcast in May and June 2020. The young singer has bewitched everyone with her voice in the eighteenth edition of the talent won by the opera singer Alberto Urso. Together with her the contestants of the talent Amici Speciali were: Michele Bravi, Alberto Urso, The Kolors, Gaia Gozzi, Irama, Alessio Gaudino, Gabriele Esposito, Andreas Muller, Umberto Gaudino, Javier Rojas and Random. The contestants were divided into two teams challenging each other with dance and song strokes.

Text As You Are

Giordana introduces herself to Amici 18 with the song “The usual bitch“, Dedicated to a Ex Girlfriend. Thanks to this conquers the professors of Maria De Filippi’s program. While staying at the house, Giordana confesses to her friend Alessandro Casillo that she has a weakness for the professional dancer Elena D’Amario.

Thanks to her talent and her commitment, Giordana Angi does not struggle to win the green jersey that sends her directly to the evening phase of the well-known talent show.

The Final of Friends

In the final of Amici clashes with Alberto Urso, Vincenzo Di Primo and Rafael Quenedit Castro. But despite the exemplary interpretations of “Having you on” by Gino Paoli e “Street” by Claudio Baglioni, unfortunately Giordana Angi’s dream of winning Amici stops one step away from the end. Alberto Urso is in fact the winner of the edition, even if the young singer remains one of the most popular protagonists!

Giordana was coach, together with Alberto Urso, of the talent show for vip Friends Celebrities aired from 23 October 2019.

On April 19, 2019 Giordana Angi released her first album, which is called “HOME”. Here is the full tracklist of the EP:

Formidable, last track of the album, it’s a cover of the Stromae piece. Some songs have French titles, this is because the singer has French origins. The August 26 a new single by Giordana Angi has been released “Hold me tighter“Which anticipated the release of the album”I want to be yours“.