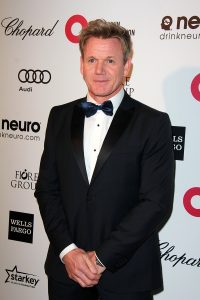 How rich is Gordon Ramsay?

Gordon Ramsay is known as the bully among TV chefs. Because one of his favorite words is “Fuck” and he has absolutely no problem with being loud. With his restaurants, of which the entrepreneur operates 33 around the world, he has already won numerous awards. A total of 22 Michelin stars have already been awarded, with many restaurants being closed or restructured. However, it currently holds 7 stars. There could hardly be a higher award for a chef. That also paid off financially. After all, the cook, restaurateur and book author is a millionaire. Gordon Ramsay has an esteemed Assets of 185 million euros. So the TV chef shouldn’t have any problems feeding his family, wife Tana and his four children.

In fact, Gordon Ramsay is one of the richest chefs in the world. He managed to create a real hype about himself, which even the TV audience cannot escape. His somewhat gruff manner is well received and has given him one particularly in the USA and Great Britain Variety of own television programs procured. Gordon Ramsay has also earned a golden nose with a computer game that came onto the market in mid-2016. In this game, the polarizing chef has turned into a cartoon character who guides the player. Original language files as well as a short video with Gordon Ramsay himself make this game so special.

All connoisseurs owe Gordon Ramsay’s career as a star chef to an initially rather unfortunate circumstance for the British. Then The native of Scotland actually wanted to become a professional footballer. However, due to an accident, he was not allowed to do this. His football career came to an abrupt end. Instead, the future TV star then took a course in hotel management at his college and thus embarked on a completely new direction. In retrospect, Gordon Ramsay himself says that it was a complete, albeit lucky, coincidence.

Today’s star was able to gain his first experience in a hotel kitchen as early as the early 1980s. Following his career at the Wroxton House Hotel, Gordon took over kitchen management at the Wickham Arms. However, he had a love affair with the restaurant owner’s wife, which was uncovered. This ultimately meant his sacking and the move to London, where Gordon Ramsay gradually worked his way up. In the meantime, the budding star chef also moved to Paris, where he learned the finer points of french cuisine discovered for himself. Guy Savoy, who himself appeared as a Michelin star chef, was one of the Briton’s most important mentors. Gordon Ramsay has even overtaken chef superstar Jamie Oliver in all his years when it comes to money.

To hone his skills as a chef even more, Ramsay also traveled to Italy before taking a job as head chef at La Tante Claire in London, a 3 Michelin star restaurant, in 1993. Only five years later the time had come and Gordon Ramsay opened his own restaurant in 1998, the Gordon Ramsay Restaurant and cooked up 3 Michelin stars, which he still holds today. After that, the Brit with a tendency towards self-presentation could hardly be stopped and was able to rapidly expand his restaurant empire. In the future, too, the very quick-tempered cook is unlikely to get quiet so quickly.

Meanwhile count worldwide 33 restaurants to the Ramsey empire, which has a total of 7 Michelin stars: