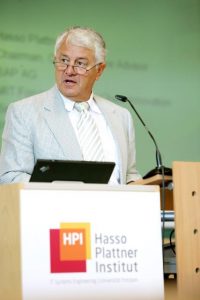 How rich is Hasso Plattner?

With his billion dollar fortune, SAP co-founder Hasso Plattner is one of the richest Germans. Born in Berlin, he founded the company that was to make him extremely rich back in 1972. As former employees of IBM (Claus Wellenreuther, Hans-Werner Hector, Klaus Tschira, Dietmar Hopp and Hasso Plattner) they jointly founded SAP (S.systems, A.applications and P.roducts in data processing). Hasso Plattner was CEO of SAP until 2003. As a founding shareholder of the company, he earns millions every year thanks to dividend payments alone. The cherished Hasso Plattner’s assets are € 7.8 billion.

Actually, Hasso Plattner could rest on his previous work for the rest of his life. But he doesn’t want that. Instead, Plattner continues to take his role as chairman of the SAP supervisory board very seriously. Incidentally, his remuneration for his work on the company’s board of directors in 2011 was only peanuts compared to the rest of his net worth. He is said to have collected just 350,000 euros, which is an unattainable annual salary for the average consumer. But Hasso Plattner is in his very own league.

While Plattner has long ceased to dominate the day-to-day business of SAP, one of the richest people in the world is increasingly appearing as a promoter of science. In fact, this man is considered to be “one of the most important private sponsors of science” in the whole of Germany. The clever businessman promotes new companies by investing between 50,000 and 100,000 euros in selected start-ups. To do this, the companies concerned have to apply to Hasso Plattner Ventures for this very capital. It is important to convince the extremely wealthy investor of yourself and your idea.

The Hasso Plattner Institute for Software System Technology has existed at the University of Potsdam since 1998. As a partner, the Hasso Plattner Foundation is behind this institute, although the SAP man committed to this early on To donate 50 million euros of his private assets to the university over a period of 20 years. In the meantime, however, Plattner has made a lot more money loose, namely well over 200 million euros.

Millions in donations for universities

However, the entrepreneur does not appear as a pure financier. After all, he also lives in Potsdam himself, so it is possible for him to actively engage in teaching and research. Hasso Plattner has therefore taken on the role of head of the “Enterprise Platform and Integration Concepts (EPIC)” department at the University of Potsdam. His good reputation has also helped Plattner to cooperate with the elite Stanford University on the west coast of the USA. There is now the Hasso Plattner Institute of Design, into which 35 million US dollars have flowed from the German’s private fortune.

Also through his 10 million euro donation for the expansion of the library at the University of Mannheim Plattner campaigned for the local science landscape in autumn 2003. Since the entrepreneur has been living in South Africa for a number of years, he has also decided to support two universities there financially – this time, however, in the fight against AIDS. Engagements like this have already earned the billionaire numerous honors. In 2007, for example, the businessman received the Order of Merit of the State of Brandenburg. The Saarland University even named this gentleman, from whom the world can expect great things in the future, an honorary doctorate as early as 1990.