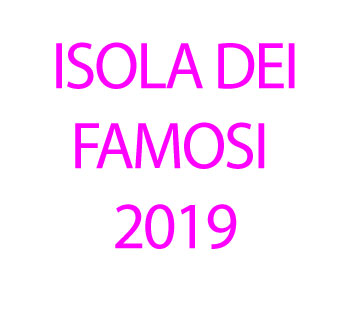 The Island of the Famous 2019 edition it was an edition full of characters who were loved by the public. The reality program that sees well-known characters having to survive on a desert island without comfort and with very little food was aired from January 24 to April 1, 2019 on Canale 5 for a total duration of 11 weeks. In particular, it was the fourteenth edition of the program conducted by Alessia Marcuzzi.

They will be Islanders

In the 2019 edition, the Isola dei Famosi program was preceded by the reality show Saranno Isolani: some aspiring castaways competed for places in the reality show thanks to telvoto. There were four finalists of Saranno Isolani chosen through the vote from home and they are: Yuri Rambaldi, Alice Fabbrica, John Vitale and Giorgia Venturini.

In the end, the two finalists Yuri Rambaldi and Giorgia Venturini will take part in the program.

Marco Maddaloni is a Judo champion sportsman, not new to reality TV experiences. He had already participated in the Beijing Express teamed up with boxer Clemente Russo. After winning many Leader trials Marco Maddaloni was the winner of the 2019 edition of the Isola dei Famosi program.

Marina La Rosa is the famous ex “Dead Cat” of the first edition of Big Brother. Marina has a degree in psychology and over the years has had a varied television career including roles as actresses and others as a host. On the island she distinguished herself for her rivalry with the other competitor Soleil Sorge who shared with her the title of woman with the strongest character within the group. Marina La Rosa ranked second in the Isola dei Famosi 2019.

Luca Vismara is a singer who participated in Amici 2017. He has a degree in Communication Sciences and is well known abroad for a song entitled “in my arms”. The success is due to an Erasmus that the boy did in Sweden during his university studies, Luca launches his song there and has an excellent response as a critic and public. It also stands out during the reality show Isola dei Famosi and in fact it ranks in third place.

Sarah Altobello is a showgirl also famous for being the official look-alike of Melania Trump. She was the protagonist of the trash web series directed by Lory Del Santo and entitled The Lady ”where she plays the protagonist. He is often present at programs such as Afternoon 5 or Morning Five and in the Isola dei Famosi 2019 was ranked fourth.

Soleil Rises ex Men and Women was the choice and then the girlfriend of Luca Onestini. The couple broke up on live TV while he was participating in Big Brother because the girl had started a relationship with Marco Cartasegna. Soleil Sorge Italian-American by birth and Influencer on the island showed a steely, determined and strong character. In this experience she also met what her boyfriend would have been for a long time: Jeremias Rodriguez the brother of Belèn and Cecilia Rodriguez. Soleil was eliminated in the tenth week, before the final episode.

Come into play in week three: Jeremias Rodriguez (brother of Belen Rodriguez and Cecilia Rodriguez) in fact he had to be part of the starting cast but a problem in his hand prevented him from leaving immediately. Having recovered from his injury, he lands on the island where he begins a relationship with Soleil Sorgè. He was eliminated by his teammates first and then by televoting in the sixth week.

Aaron NIelsen is the son of the famous actress Brigitte Nielsen. Aaron also works in the fashion world and in particular as a model for very famous brands. Aaron Nielsen arrives at the latest episode of the Isola dei Famosi 2019 program finishing in fifth place.

Arnadna Romero, a beautiful Cuban actress and presenter, is famous for having taken part in a film by Pieraccioni and for being the ex-girlfriend of Pierpaolo Petrelli. The couple also had a son named Leonardo. Ariadna was eliminated in the seventh week of her stay on the island.

Demetra Hampton was a model and actress and in Italy she is famous for having taken part in several comic and comedy films including “Three columns in the chronicle” by Carlo Vanzina, “Sain Tropez-Saint Tropez” by Castellano and Pipolo the TV series “Valentina” of which he was the protagonist inspired by the comic. It was eliminated early, in the third episode.

Abelkader Ghezzal is a former Serie A footballer where he played in squads like Bari and Genoa. He is now a football agent and his team also boasts the player Rachid Ghezzal from Fiorentina. Onisland of the famous was eliminated at seventh week of stay on the island.

Greece Colmenares is a very famous actress of South American and American Soap Opera. In particular we remember her in “Topaz” and “Manuela” and her most famous role is probably that of Milagros. Grecia Colmenares has a partner much younger than her (they bring 26 years) and a son of about 18 years. Greece was eliminated during the fourth week of stay on the Island.

Singer-songwriter and showgirl, Jo Squillo was particularly famous in the eighties and nineties in Italy. She entered the program at the third week and was eliminated in the seventh. He had other reality shows such as “La Fattoria” in 2005.

Kaspar is a very famous actor in Italy both in cinema and in TV series. Among his works we remember Phenomena by DArio Argento and Elisa di RIvombrosa where he plays alongside Jane Alexander. He is currently married to Veronica Maccarone, former program coupon “Those who football”. During his stay on the Island of the Famous Kaspar he was greatly appreciated by his companions who defined him as the ideal companion. Also thanks to his strength and determination arrived at the ninth week before being eliminated.

The Italian singer Riccardo Fogli is known for having had a brilliant career in the world of music. Despite his very thin physique he showed great strength and was present on the island for 9 weeks, after which he was eliminated. He bonded a lot with Marina La Rosa.

Paolo Brosio is a sports journalist, host and also a writer. He was born as a correspondent to QUelli che il calcio at the time when the program was led by Fabio Fazio. Later he works with Domenica In, Linea Verde and other programs. His Catholic turn is famous, which allowed him to regain serenity. Paolo Brosio was eliminated from the program in the eighth week.

Stefano Bettarini he entered the program in place of Jeremias Rodriguez who only later joined the group due to a hand injury. Stefano Bettarini had already been part of the Isola dei Famosi as a correspondent. On that occasion he distinguished himself for having had a flirt own on the island with the castaway Dayane Mello, formerly of Stefano Sala. Stefano Bettarini is the ex-husband of Simona Ventura with whom he had two children and is currently engaged to Nicoletta Larini. On the Island of the Famous it was eliminated in the ninth week.

Beautiful social media star Taylor Mega boasts a million followers on Instagram. Openly bisexual, the girl has had many loves including Flavio Briatore, Sfera Ebbasta, TOny Effe and Giorgia Caldaruolo. On the island MEgan confessed to having had drug addiction problems in the past but his adventure on the island did not last long enough to make it better appreciated: in fact, the girl was eliminated after the first week of her stay.

Viktorija and Virginia Mihajlovic are the young daughters of football manager Sinisa Mijalovic. They are models and influencers and participated as a couple in the Canale 5 reality show. They were eliminated in the fifth week of their stay in the program.

Youma Diakite is a model who has often been compared to Naomi Campbell for her beauty. She is originally from Mali and also boasts a career in cinema including in films such as Ocean’s Twelve. She withdrew from the Isola dei Famosi 2019 for personal reasons in the second week.