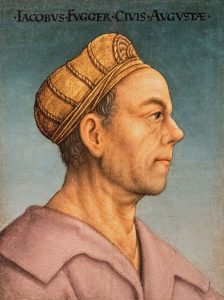 Who was the richest person ever?

Whether Bill Gates or Jeff Bezos, so far they have not even come close to holding a candle to the richest man in world history. Jeff Bezos with a fortune of 173.85 billion euros and Bill Gates with a fortune of 122.64 billion euros may be the richest people in the world. But Jakob Fugger once had ten times this fortune. Its assets are based on projections that enable this data to be adapted to today’s conditions. Many will never have heard the name “Jakob Fugger”. But anyone who knows the story of this man knows that his recipe for success certainly required the necessary portion of unscrupulousness. The estimated, adapted to the present day Jakob Fugger’s fortune 358 billion euros.

Jakob Fugger was the richest person who ever lived

This billionaire also came from a humble background. From the grandson of a farmer, Jakob Fugger managed to become the richest person in the entire history of the world. The Augsburg native made even the wealthy Medici look pale. In order to achieve this feat, Jakob Fugger was fully committed to the family business. This man has not shied away from extreme risks and has not gone down in history as a true workhorse for nothing. Even Mansa Musa, the former king of Mali, is named after Jakob Fugger with his fortune of 325 billion euros.

In order to understand how wealthy Jakob Fugger really was, this comparison is also useful: At his best times, Bill Gates’ fortune did not even make up half a percent of the gross domestic product of the USA. Jakob Fugger, on the other hand, was able to achieve four times the share of the gross domestic product. Even the Rothschilds, who are considered to be one of the most famous and powerful banking families in the world, failed to do this. The multi-billionaire benefited from the historical epoch in which he lived, since the Renaissance was a time of intellectual upheaval.

Excerpts from his life

Jakob Fugger was born into an Augsburg trading family. It was thanks to him that the family business was successful across Europe within just a few decades. His training for this role began at the tender age of 14 when Jakob learned his trade in Venice. The cotton trade with Italy laid the foundation for the family fortune of the Fuggers. However, the family was only to become extremely rich through their banking transactionswhich the brothers Jakob, Georg and Ulrich were busy driving forward. From 1487 it was de facto that Jakob held the scepter in his hand and had taken over the leadership.

In the meantime, the family business had a monopoly on the European copper market. Jakob Fugger’s work also had a political impact, as the billionaire, for example, made the rise of Emperor Maximilian I financially possible in the first place. The wealthy banker also went down in history with the first Renaissance building in all of Germany, which he founded. That he was nicknamed “The Rich” during his lifetime, shouldn’t be surprising. Jakob Fugger surpassed the wealthiest Germans and the richest people in the world with his fortune at that time.

However, this man had no children, so Jacob’s nephews inherited his inheritance. In any case, Fugger got married relatively late, at almost 40 years of age. His bride was just 18 years old at the time, and therefore not even half the age of her wealthy husband. Even if the banker presented his wife with jewels, he traveled a lot and seldom at the side of his wife. The fact that Fugger’s wife married a business friend of the same weeks after the death of her husband may be an indication of how things really stood with the marriage of the two. Incidentally, the “Age of Fugger” was not due to end until 1560when nephew Anton died too.