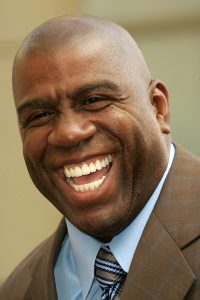 How rich is Magic Johnson?

Earvin “Magic” Johnson is one of the most famous basketball players of all time. With the Los Angeles Lakers, he won the NBA championship five times. He was also a member of the legendary Dream Team, which won Olympic gold in 1992. Johnson had ended his career in 1991 because of his AIDS illness. He is now a very successful businessman. Magic Johnson’s estimated net worth is 490 million euros.

This is how Magic Johnson’s fortune is composed

As an active basketball player, Magic Johnson was at times the highest paid athlete in the world. After his second season with the Los Angeles Lakers, he signed a 25-year contract that brought him a million dollars a year from 1984. A few years later, his salary was increased to $ 2.5 million. Even after Johnson retired in 1991, the Lakers continued to pay him $ 1 million a year until his contract ended in 2010.

In 1995 the former top athlete founded Magic Johnson Enterprises, which today includes numerous Movie Theaters, Real Estate, and Starbucks Outlets and is worth around $ 1 billion. Johnson also holds shares in the Los Angeles Dodgers baseball club and the Los Angeles Sparks women’s basketball team. He is the richest NBA player of all time behind Michael Jordan.

Magic earned salaries of “only” $ 39,342,860 throughout his career in the NBA. However, the salary is only a small part of his gigantic fortune:

Immediately successful in the NBA

Earvin Johnson got his now-common nickname “Magic” from a reporter when he scored 36 points, 18 rebounds and 16 assists in a high school basketball game at age 15. Still, Johnson didn’t really want to become a professional basketball player, but rather a TV commentator. Therefore, he studied communication science at Michigan State University. In 1979 he won the US university championship with the university team and then took part in the NBA draft. There he was chosen in the first place by the Los Angeles Lakers. In his first season 1979/1980 Johnson won the NBA championship with the Lakers, in which he had a large share. To date, he is the only newcomer to the league to have been named the best player in an NBA final.

Between 1982 and 1988 Magic Johnson and the Lakers won four more NBA titles. In 1987, 1989 and 1990 Magic was also named the best player in the league. He was diagnosed with HIV infection prior to the 1991/1992 season. He then announced his immediate retirement from active sports. Even so, he was voted into the 1992 All-Star Team by fans, for which he returned to the field in February 1992. He was also chosen by the NBA as a member of the team that was supposed to represent the USA at the 1992 Olympic Games in Barcelona. The so-called Dream Team won every game by an average of 44 points and took the gold medal.

Various roles at the Lakers

After the Olympics, Magic Johnson announced that it would return to the NBA, but ultimately did not. Instead, he became an entrepreneur and television commentator. In the 1993/1994 season Johnson returned as a coach to the Lakers, but missed the play-offs with his team and therefore resigned at the end of the season. In the summer of 1994 he bought a five percent stake in the Lakers. At the beginning of 1996, the now 36-year-old returned to the field, played 32 games for Lakers and finally resigned as a player after losing the first round in the play-offs. He sold his stake in the club again in 2010. Between February 2017 and April 2019 he assumed the office of President of the Lakers.