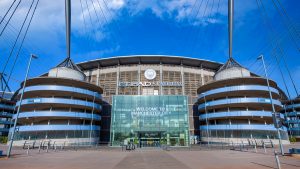 Sheikh Mansour bin Zayed Al Nahyan was born with the proverbial golden spoon in her mouth. He’s not working hard for his billion dollar fortune. Rather, he belongs to one of the richest families in the world. His father is Zayid bin Sultan Al Nahyan. Mansour and his family rule Abu Dhabi in the United Arab Emirates. Nevertheless, his sphere of activity does not only extend to this part of the world. Rather, the Sheikh has been the main shareholder in the British football club Manchester City since 2009. The cherished Mansour bin Zayed Al Nahyan’s net worth is € 35.5 billion.

The sheikh’s title in the cabinet gives little information about what this man actually does all day. It is likely, however, that he is helping his brother, Chalifa bin Zayid Al Nahyan, who himself appears in the role of president. Likewise, the Sheikh is the Chief Executive Officer of First Gulf Bank. The billionaire also supports a good cause through his membership of the Board of Trustees of the Zayed Charitable and Humanitarian Foundation.

It is clear that Mansour bin Zayed Al Nahyan has no shortage of money. He is the owner of an expensive luxury yacht, the Topaz. This yacht is valued at 420 million euros. The Topaz has eight decks, including two helicopter landing pads and a jacuzzi. Mansour bin Zayed Al Nahyan also has an expensive collection of luxury cars and its own suite in the only seven star hotel in the world. He also owns a 45 million euro villa in Spain.

Since 2009, the Sheikh has largely owned the City Football Group (CFG). It not only includes Manchester City, but also New York City FC and Melbourne City. Abu Dhabi United Group Investment & Development Limited holds 86.21 percent of CFG. The remaining 13.79 percent is held by China Media Capital Football Holdings Limited. Mansour bought Manchester City in 2008 for £ 210m at the time. At that time the football club was down, a relegation candidate in the Premier League and without a title for years. Since the purchase, Manchester City has seen a steep upward trend, with coach Pep Guardiola breaking records and championship titles to follow.

Aside from football, Mansour bin Zayed Al Nahyan also invests in other sports. With his shares in Ferrari and Daimler AG, he managed to bring Formula 1 to the United Arab Emirates. Formula 1 drivers like Sebastian Vettel, Lewis Hamilton and others have been Formula 1 drivers since 2009 annually for the Formula 1 race in Abu Dhabi.

Insights into the life of the sheikh

As Vice Prime Minister of his home country, Mansour bin Zayed Al Nahyan enjoys a special status. Incidentally, he has been married to Alia bint Mohammed bin Butti Al Hamed since 1995. Together they have the son Zayed. Since 2005 he has been married to his second wife Manal bint Mohammed bin Rashid Al Maktoum, a daughter of the ruler of Dubai, who is also Vice President and Prime Minister of the United Arab Emirates. The couple have five children together, the two daughters seeing the light of day in 2006 and 2014, while the three sons were born in 2007, 2011 and 2017. The fact that the children do not have to worry about their financial livelihood is also due to the fact that Mansour bin Zayed Al Nahyan also has a hand in the following companies:

Sheikha Manal bint Mohammed bin Rashid Al-Maktoum, the daughter of Sheikh Mohammed bin Rashid Al Maktoum, who has since given her husband five children, is the Sheikh’s second wife. Despite the fact that the sheikh has two women by his side, which is frowned upon in most of the western world, he spent part of his studies in the United States. There he attended the Santa Barbara Community College in 1989. However, the member of the ruling family received his degree from the United Arab Emirates University, from which he received his in 1993 Bachelor in International Affairs got presented.