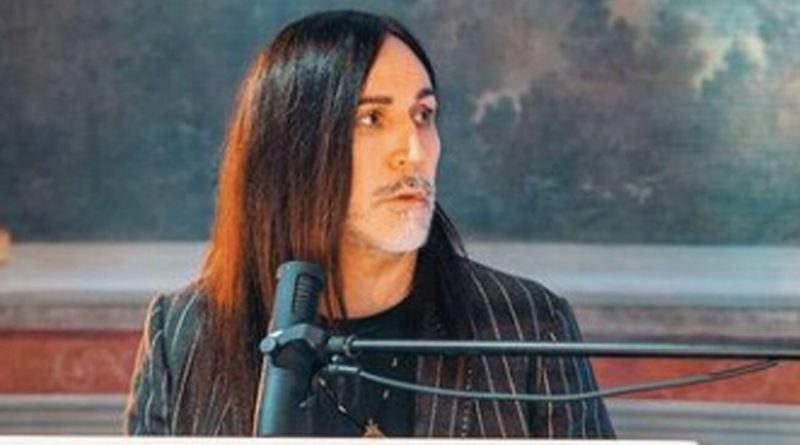 Manuel Agnelli is the well-known frontman of the alternative rock group Afterhours. 54-year-old Milanese singer-songwriter and musician, Manuel is also a record producer and television personality, best known for being one of the judges of the talent show X-Factor. Active in the musical field since 1985, he has performed with the Maneskin group, on 4 March, on the occasion of the evening dedicated to the song of the author of Sanremo 2021, presented by Amadeus.

Who is Manuel Agnelli?

Manuel Agnelli was born on March 13, 1966 in Milan, he grew up in Corbetta (in the province) and graduated from the State Agricultural Technical Institute of Novara. At 19 he founded the alternative rock group Afterhours which debuted in 1987 with the album All the Good Children Go to Hell. At the end of the eighties he gives life, together with other musiciansVox Pop record label, which produces artists such as Prozac +, Mau Mau and many others.

The songwriting success, with Afterhours, arrives in the mid-nineties, when with the release of the albums Are you afraid of the dark (1997) and It is not forever (1999) the group received very positive reviews from critics and were praised by lovers of the alternative rock genre. Manuel carries on his career as a singer-songwriter and frontman of the group, and that of a record producer at the same time. Thanks to his record company, Agnelli collaborates with Patty Pravo, La Crus, Mina, Verdena, Perturbazione and others.

With Afterhours, Manuel, gives the public songs such as: What is not there, Inside Marilyn, I want beautiful skin, It is not forever And There are many ways.

Among other things, Manuel Agnelli also made his debut in the literary world, precisely in 1999 with The tales of the tube, later reprinted with the title The wonderful tube.

In March 2021 he sings on the stage of Sanremo 2021 together with the Maneskin, on the occasion of the evening dedicated to the Sanremo 2021, together they will sing the piece by CCCP Loving you.

Manuel Agnelli since 2016 is one of the historical judges of X Factor, in 2021 he joins Mika, Emma Marrone and Hell Raton. under the management of Ludovico Tersigni who skillfully replaced Alessandro Cattelan. In this edition the most prominent singers are Erio and Vale Lp. Erio is part of Manuel’s team.

Manuel Agnelli’s career begins when he is only 19 years old. In 1985 he founded, together with bassist Lorenzo Olgiati and drummer Roberto Girardi, the Afterhours group, which will be joined by the guitarist Paolo Cantù. Manuel sings, plays the guitar and the piano, as well as writing the lyrics and composing the music together with the band.

The group, considered together with Marlene Kuntz and Verdena, one of the bands that most marked the Italian music scene in the nineties, engraved in order:

During his career as leader of Afterhours, Manuel Agnelli writes and composes beloved and cult songs such as: What is not there, There are many ways, Honey sickness, It is not forever, The white widow, Let me lick the adrenaline And Inside Marilyn. Some concerts of the group were opened by Elettrodust, a group that launched the well-known composer and producer Dardust on the Italian music scene.

Beloved by audiences and critics alike, the current Afterhours line-up is:

In 2018 the group celebrates in a single soldout date, i 30 years of career. The concert held at the Assago Forum becomes a docu-film, directed by Giorgio Testi, which is also presented at the Rome Film Fest in the same year.

Watch the video de The white widow by Afterhours

Career as a record producer

Simultaneously with his career as a songwriter and musician, Manuel Agnelli carries on his record label: the Vox Pop. A highly successful label, over the years it has helped launch and produce artists such as: Prozac +, Ritmo Tribale, Mau Mau and Cristina Donà.

In this context, Agnelli collaborated with, among others Verdena, Patty Pravo, La Crus, Mina and Marco Parente.

In June 2001 in Rimini, the Tora starts! Tora! Festival. Conceived and organized by Agnelli, the Festival continues uninterruptedly until 2005 and sees the participation of artists such as Marlene Kuntz, Subsonic, Line 77, Modena City Ramblers, Motel Connection (by Samuel dei Subsonica), i Bluvertigo by Morgan, Baustelle, Bugo, Max Gazzè, The Zen Circus, Marta on the pipes and many others.

For the commitment and the success of the Festival, Manuel is awarded by the Faeza Meeting of Independent Labels; and in 2001 he also won the prize as best Italian producer at the Italian Music Awards, for the production of the successful album Just a big stone of Verdena.

It is 2016 when Manuel Agnelli is called to play the role of judge at the talent show X Factor, presented by Alessandro Cattelan. That year Manuel is a judge along with Fedez, Arisa and Alvaro Soler, but over the years he will share the role with Mara Maionchi, Levante, Asia Argento, Lodo Guenzi, Mika, Emma Marrone and Hell Raton. Manuel is still judge a X Factor, awaiting confirmation for the next edition.

In the two-year period 2018-19, he is the protagonist of Oxygen, program broadcast on Rai 3 that ranges between the written word and the sung one, and of which Manuel is also an author. The program sees several guest artists in the studio who tell their stories using music and memories.

At the end of 2020 Manuel conquered the studio and the audience of X Factor, performing together with the Little Pieces of Marmelade, during the final of the program, singing Poison by Afterhours.

With 108,000 followers, Manuel Agnelli’s instagram profile offers his fans photos and videos especially of the artist’s musical and work projects. Indeed, Manuel is not inclined to show or talk about his private life. However, we can always keep up to date on his new works, such as the recent collaboration with Rodrigo D’Erasmo, live broadcast on February 6 on Rai2. 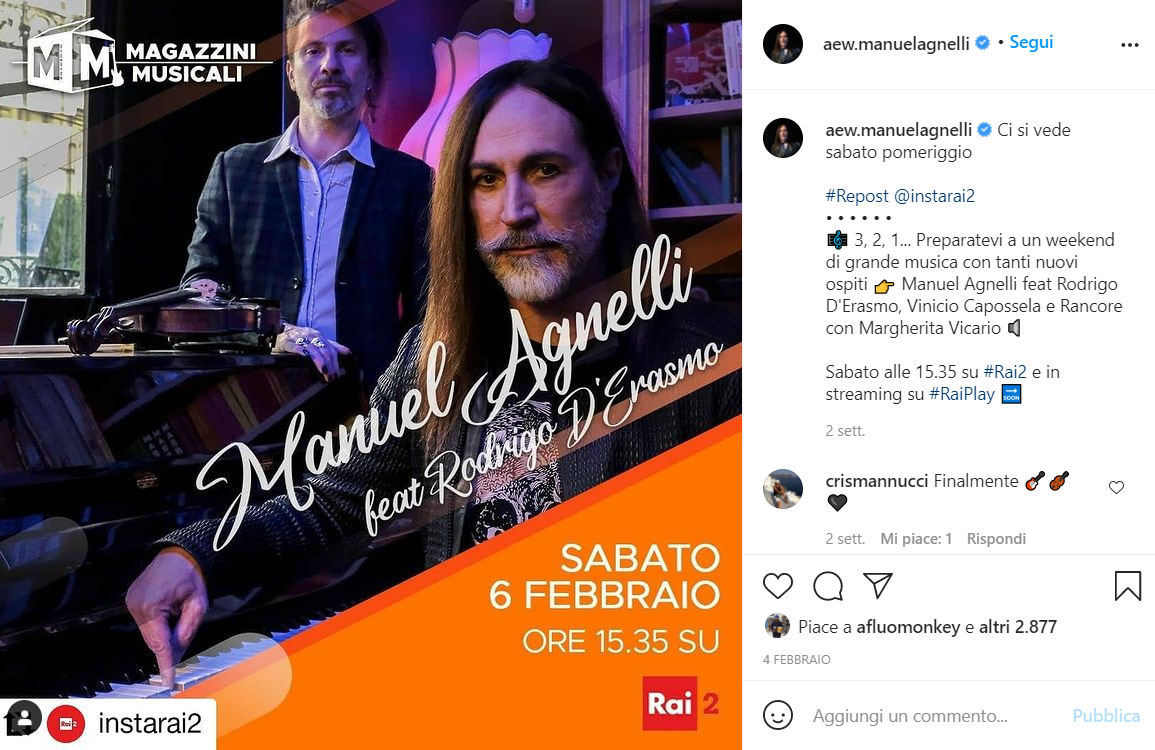 Francesca Risi is the woman who has been at Manuel Agnelli’s side for over fifteen years, both shy towards worldliness it is difficult to find any indiscretion on the two.

Together they have a daughter, Emma, ​​born in 2009. Apart from this certainty, it is not even clear whether Manuel and Francesca are married or not.

The two met in a bookshop in Milan, which Manuel tells about

She is passionate about literature and I used to go there to read. I started coming back just to see her again. He thought I was an architect, he didn’t know me, he wasn’t in the world of music, and I liked that, even if there are people who approach you for what you do. She was jealous and I think she still is. But he had the intelligence to understand that people are made in a certain way and not to want to change them. She is a mother and a housewife and she is my stylist, she also has a crazy taste as an interior designer

Manuel Agnelli has already trod, together with Afterhours, the stage of the Ariston. The group took part in the 2009 Sanremo Festival, conducted by Paolo Bonolis. With the song The country is real, the band was eliminated during prime time, together with Tricarico and Iva Zanicchi. That year at the Festival Marco Carta triumphed in the “Artists” category and Arisa in the “Proposals” category; the latter category that launched Malika Ayane’s career.

On the occasion of the Sanremo Festival 2019 (conducted by Claudio Baglioni), Manuel collaborates with Daniele Silvestri and Rancore on the song Argentovivo. The piece ranks sixth but wins the Mia Martini Critics Award, the Press Room Award and the award for best text.

We will see Manuel Agnelli on March 4th on the Ariston stage, together with the Maneskin group, on the occasion of the evening dedicated to the author’s song by Sanremo 2021, presented by Amadeus, who will be joined by Elodie, Alice Campello, Matilda De Angelis, together with special guests Luca Argentero and Achille Lauro.

Manuel Agnelli and Maneskin will sing a cover of Loving you, song of the CCCP.

The song It is not forever by Afterhours, will be performed, during the evening of March 4 of Sanremo 2021, by The welfare state with Sergio Rubini and the entertainment workers.

Learn more about the duets of Sanremo 2021, click here.

Just on February 18, 2021, Manuel Agnelli gave a nice interview to