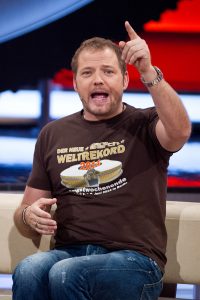 How rich is Mario Barth?

A man who knows women – Mario Barth deals with the interpersonal relationships between men and women. He explains these connections in his comedy programs, where you get the feeling that he has really studied the world of women. Because what he says is true. This man is in the know and reveals his knowledge. Since 2001 he has been a successful German comedian, his fortune is estimated at 25 million euros, the tendency is increasing – his success is not limited, on the contrary, with every year he becomes even more successful. Mario Barth is the most successful German comedian and has received numerous awards.

The life of the German comedian Barth

He was born on November 1, 1972 as one of six siblings in Berlin, Germany. He attended a Catholic private school and then trained as an electronics technician in the field of telecommunications systems. Then he completed an acting training – the beginning in the stage area. He attended various comedy workshops where he met actors and especially comedians. In the television shows “NightWash” and “Quatsch Comedy Club” he was able to gain stage experience with short appearances and that’s how his life began Comedy career.

The comedian also has acting talents, he was in the films “Man thing“,” Blutzbrüdaz “,” 7 dwarfs – The forest is not enough “and” Crazy Race 3 – They pick every lock “. His voice had also already landed film roles, for example as a monkey in “The Zoo Keeper”. He also lent his voice to a car in the film “Cars”, most recently in 2016 as a voice actor for “Pets”. His voice spoke for the funny little pug named Mel.

Men are pigs, but so are women

In 2001 he toured for the first time with his stage program “Men are pigs, but women too”. This was the beginning of the steep comedian career. 2 years later the live DVD of this program was released, which reached 3rd place in the German album charts and has since been included Awarded ten platinum awards for two million videos sold has been. From now on, the fans, the programs, the gigs, and his fortune grew more and more. In 2003 he got his first own TV show on Pro7 – “no idea?”, In 2005 the second season of it was broadcast. He was also a guest on the program “Schillerstraße”, where he got various guest roles.

His program “Men are primitive but happy!” Started in 2006 and became the same year with the German Comedy Award awarded in the category Best Live Comedy. Further broadcasts were not long in coming, so soon “Mario is looking for paradise” and “Mario Barth presents” were broadcast on television. This was followed by the show “Willkommen bei Mario Barth” on RTL. In 2009 he made his first own feature film, “Mannersache”. A comedy that he shot together with Dieter Tappert (known as Paul Panzer, comedian). The two are best friends in the film based on fact – because in reality they are also best friends.

Before Mario Barth, the world record was 15,900 comedy visitors at a show by American comedian Chris Rock in London. In 2008 Barth set a new record, he stepped forward 70,000 spectators in the Olympiastadion Berlin and thus achieved the world record as a “live comedian with the most viewers”. A new attempt to break the world record took place in 2014. In 2014 Mario Barth set the world record “The largest audience for a comedian in 24 hours” with 116,498 spectators in the Olympiastadion Berlin. At the same time, in the same year he also set the European record for the largest mobile stage in the same stadium. In 2015 the comedian received the Bavarian TV Prize for his current program “Mario Barth covers!” On RTL. These productions naturally ensure a steady increase in wealth, just like his already published other programs “Men are embarrassing, women sometimes too!”, “Men are to blame, women say” and “Men are crazy, but sexy!”

Mario Barth and his girlfriend “Paula”

Mario Barth’s girlfriend should probably Paula mean. You don’t know for sure, because he doesn’t reveal anything about them in public and no one has seen them yet. The two are said to have been a couple for 15 years. Mario told Bild Zeitung that it eschewed the public and that he would respect it. So you know next to nothing about your girlfriend, but the fact that Mario Barth knows so much about the world of women suggests that this relationship must exist. How else is he supposed to be able to collect so much information about the female world ?!