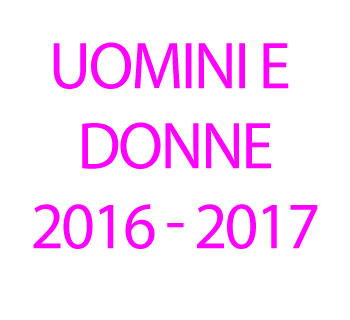 Men and Women season 2016 – 2017 was full of twists that were characterized by abandonments, arguments and it was also the first edition of the gay throne of Men and Women conducted by Maria De Filippi. Two of the couples formed in this edition are married. All the characters of this edition were much loved: i tronisti were Clarissa Marchese, Claudio Sona, Claudio D’angelo, Riccardo Gismondi, Marco Cartasegna, Desireè Popper, Rosa Perrotta, Luca Onestini, Manuel Vallicella, Sonia Lorenzini.

Manuel Vallicella is a simple boy, a worker by profession who had a past in the program as a suitor of Ludovica Valli. However, the girl does not choose him and Manuel is called back by Maria De Filippi to ascend the throne. Manuel is characterized by a very shy and consistent character to himself all the way.

CHOICE: Manuel Vallicella leaves the throne without a choice. He realizes that the television context is not for him and that he is unable to let himself go in front of the cameras. He then abandons the throne so as not to make fun of anyone, behavior perfectly in line with the character that the boy had shown.

Desirèe Popper he has not completed his throne. Before joining men and women he had had a brief relationship with Alessandro Calabrese.

CHOICE: Desirèe Popper abandons the throne without choosing because she is not convinced by any of her suitors. Today, Desirèe Popper is currently engaged even if we do not know the name and identity of her partner.

Rosa Perrotta was a tronista with a very evident beauty who had a throne full of spontaneity. Her character and her determination lead her to participate also in the Island of Fame and to pursue a career as an actress. The number of her followers on Instagram is such that Rosa currently collaborates with several beauty and fashion brands as an influencer and testifies.

CHOICE: Rosa Perrotta chooses Pietro Tartaglione: the boy, a Neapolitan lawyer, immediately shows himself in love with and involved with Rosa. Their relationship is one of the longest and in fact the two got married in the summer of 2019 and gave birth to a beautiful baby.

Riccardo is a professional basketball player as well as one of the youngest tronista in the history of Men and Women. He entered the program without ever having fallen in love before but despite this he shows himself very determined in knowing his suitors and his choice will become an important relationship that continues to this day.

CHOICE: Riccardo’s choice is Camilla Mangiapelo. The girl, from Rome like him, has now become a very popular influencer. RIccardo and Camilla went to live together in Rome and they are still engaged, carrying on a happy and healthy relationship!

Clarissa Marchese ascends the throne of Men and Women after winning Miss Italy 2014. The girl immediately distinguished herself for a big heart, a great honesty and a huge desire to fall in love. Despite having many suitors to choose from, his attention falls on a choice perhaps less televised but more of a heart. Clarissa is currently married to her choice and the two have had a baby girl.

CHOICE: Clarissa Marchese chooses the suitor Federico Gregucci, a simple boy with whom an important and spontaneous feeling was immediately established. He prefers it to Luca Onestini who will be on the throne soon after. The couple now lives in Miami where Federico works in the world of football and had a daughter.

Claudio D’Angelo is a common boy who made his way alone starting from the province and coming to sit on the red chair after having been the single tempter on Temptation Island led by Filippo Bisciglia. His suitors are mainly two: Sonia Lorenzini and Ginevra Pisani. Sonia abandons the program because she is disappointed by Claudio who decides not to go and pick her up and therefore chooses Geneva.

CHOICE: Claudio chooses Geneva Pisani despite there being 13 years of difference, the story lasts for several years. The two become travel influencers and leave in autumn 2019.

Claudio Sona is a model and owner of a bar in the city of Verona. It was the first gay throne in history and for now still the only throne of its kind. Claudio has a strong and apparently detached character but he proved to be full of charisma and sweet. Claudio is currently in successful influencer and appears to be single.

CHOICE: Claudio Sona’s choice is Mario Serpa. The two had a relationship that lasted just under a year and ended in a thousand controversies. In fact, Claudio Sona has been accused of still being with his ex or the former protagonist of riccanza Juan Fran Sierra.

Marco Cartasegna is a student of the Bocconi, coming from Milan who immediately distinguished himself for his very controlled and at the same time very elegant way of doing things. Marco is a tronista at the same time as Luca Onestini and contends with him for the attention of Soleil Rises a suitor of both initially and who in the future will become a parsley of Italian TV.

Sonia Lorenzini ascends the throne after the disappointment received from Claudio D’Angelo: the girl she is nice and volcanic as well as rather impulsive. The main suitors are Emanuele Mauti and Federico Piccinato.

CHOICE: Sonia Lorenzini chooses Emanuele Mauti: the two have a history and a coexistence that lasts several months but then they will leave definitively due to character incompatibilities. Sonia at that point after some time will get engaged to the other suitor Federico Piccinato and the two are currently still a couple.

One of the most beloved suitors in the history of the program becomes a tronista: immediately after being “discarded” by Clarissa Marchese who preferred Federico Gregucci, Luca Onestini ascends the throne of Men and Women by gathering several interesting suitors and sharing the throne with Marco Cartasegna. The two boys have different characters and do not fail to pinch each other during the episodes. Later he participates in the Big Brother VIP by winning the program, here he meets his current girlfriend Ivana Mrázová.

CHOICE: Luca Onestini chooses the suitor Soleil Sorgè. Soleil was initially undecided between the two tronists and only towards the end of the throne is declared for Luca who chooses her. The two begin a relationship that ends just when the boy enters Big Brother’s house: Soleil is in fact seen in the company of Marco Cartasegna the other tronista.