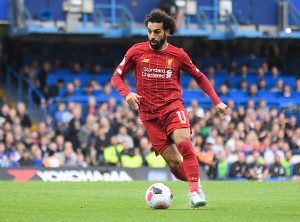 How much money does Mohamed Salah earn?

Mohamed Salah is an Egyptian footballer who is currently under contract with Liverpool FC. With the English club he won the Champions League in 2019 and the English Premier League in 2020. In addition, there are another English and two Swiss championships in the vita of the offensive player. The cherished Mohamed Salah’s net worth is 50 million euros.

Beginning of the footballer’s career

Born in 1992, Salah began playing football in a club in his Egyptian homeland at the age of twelve. His first professional club was the al-Mokawloon al-Arab SC, for which he made his debut in the Egyptian top division in May 2010. A year later, Salah took part in the U20 World Cup in Colombia with the Egyptian U20 national team. There he aroused the interest of those responsible at FC Basel. In March 2012, Salah completed a trial training session with the Swiss, one month later the Basler bought the attacker for 2.5 million euros.

Mohamed Salah won the Swiss championship with FC Basel in both 2013 and 2014. When the club celebrated its second title in the summer of 2014, Salah was no longer under contract with him. Because the Egyptian was in January 2014 moved to Chelsea for 16.5 million euros. In London, however, his career stagnated. Only at the end of the 2013/14 season did Salah have a regular place with the Londoners. In the 2014/15 season, which Chelsea finished as English champions, the attacker was only used in three league games.

Top form at AS Roma

In February 2015, Mohamed Salah went on loan to Fiorentina. Although the contract with the Italians ran until June 2016, Salah refused to continue playing for the Florentines in the summer of 2015. Instead, Chelsea loaned him to AS Roma. Salah used his time with the capital city for his breakthrough. In the In the 2015/16 season he scored 14 league goals, then the Romans withdrew the option to buy and committed the attacker for 15 million euros. In the 2016/17 season, Salah even entered the top scorer list of the Italian Serie A 15 times.

In the summer of 2017 Liverpool FC signed their coach Jürgen Klopp Mohamed Salah for 42 million euros making him the most expensive player to ever move to Anfield. In the 2017/18 season, his first in Liverpool, Salah scored 32 goals – more than any other player since the Premier League consisted of 20 clubs. In the summer of 2018, Liverpool and Salah were in the final of the Champions League, the following year they won the competition. At the end of the 2019/20 season, the Reds and their Egyptian star striker finally won the English championship, which the club’s fans had to wait for 30 years.

When Mohamed Salah joined Liverpool in the summer of 2017, the club provided him with an annual salary of just under £ 6.24 million. Only a year later, the Egyptian extended the contract with the English club until 2023 and was able to agree on a salary increase. Salah gets an annual one Liverpool FC salary of £ 13.5m. Of course, there are also bonus payments from the club and juicy sponsorship money.

In view of Mohamed Salah’s success and personable charisma, companies are lining up to advertise with him. He is the testimonial of Electronic Arts, DHL International, Exxon Mobile and Vodafone. He is also one of the most famous kickers in the PR campaigns from Adidas appear. Salah has been the face of the Adidas retro brand Adicolor since the beginning of 2020. With these advertising contracts, Mohamed Salah continues to expand his fortune.