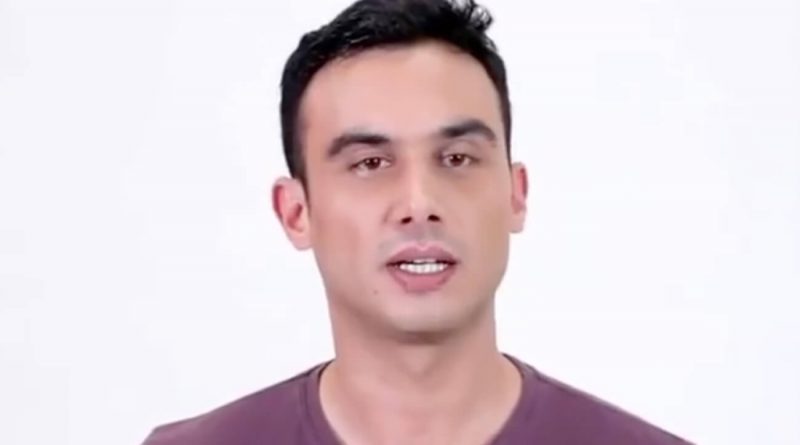 Nicola Pisu, is the son of Patrizia Mirigliani and grandson of the historian patron of Miss Italy, Enzo Mirigliani. Nicola has 32 years old and was born in Trento, jumps to the headlines in February 2020, when the mother announces that she denounced her son to save him from drug addiction. Today Nicola Pisu says he is drug free, and is a competitor of the Big Brother Vip 6 where he falls in love with Miriana Trevisan. It is eliminated in the episode of 12 November, his first meal outside the house was Sushi.

Who is Nicola Pisu?

Nicola Pisu was born in 1989 by Patrizia Mirigliani and the entrepreneur Antonello Pisu. There is not much information about his life, except that, at the age of 18, following unpleasant bullying and frequent bad company, Nicola Pisu begins to take illegal substances, coming to be addicted to it. In 2020, in fact, the same mother, Patrizia Mirigliani, announces the report against his son for threats, violence and extortion. To date, after 12 years of drug addiction, Nicola Pisu says he is rehabilitated and ready to live peacefully. He currently curates the Miss Italia website and has worked on the docu-film, Story of a Calabrian boy, about the grandfather Enzo Mirigliani. It will probably be one of the competitors of the Big Brother Vip 6, son of art, together with Anna Lou Castoldi.

Due to drug addiction problems, Nicola Pisu does not have a stable profession. To support himself he did various jobs, seasonal and occasional, as, for example, employed in a hotel in Trentino, helped by his father Antonello Pisu. He collaborated in the making of the docu-film, Story of a Calabrian boy, dedicated to the grandfather Enzo Mirigliani. Currently, after various hospitalizations to combat drug addiction, Nicola Pisu curates the website of Miss Italy.

At the age of 18, Nicola Pisu begins to have drug addiction problems. The mother, noticing the problem, tries to understand the reasons and help her son. At 20, Nicola, he is admitted to the first community, but after 8 months the problem is not averted. Over the span of 10 years, he comes hospitalized and changes about 7 recovery communitiesbut failing to heal. The relationship with his mother, due to drug addiction, worsens. Nicola becomes verbally aggressive towards Patrizia Mirigliani, who also suffers threats and thefts from his son. Seeing herself now alone and disheartened, Patrizia Mirigliani denounces Nicola Pisu, with the accusations of threats, violence and extortion. The young man is sentenced to wear the ankle bracelet and to keep a minimum distance of 400 meters from his mother.

Nicola suffered a lot of bullying, in high school. One thing he never told me because it humiliated him. If we parents do everything to save the lives of our children, schools do the same. The problem was caused by the world around him. After the complaint, my son initially thought of a great wickedness on my part but today he thanks me, telling me that I gave him a way to think. The good news is that Nicola has reached a good awareness, that those damned substances take away the conscience.

To date Nicola and his mother have a solid relationship.

In the home of Big Brother VIP Nicola Pisu talked about his story with Gianmaria Antinolfi, the boy also confessed to having thought about suicide in the darkest moment of his life. Has further reiterated like the one with the mother is a special report. He also told of his difficult experiences in the community, revealing that when he woke up in the morning he would cry.

Nicola Pisu ends up nominated twice in the first three weeks of his stay in the house: the first time when Tommaso Eletti came out, a second time in the October 1 episode when Nicola the stay is played with Andrea Casalino and Gianmaria Antinolfi and manages to win the televoting: the eliminated in fact of the third week is Andrea Casalino. Also in the episode of 1 October Nicola Pisu receives a visit from his beloved mother Patrizia Mirigliani: it was visible to everyone how the relationship between the two is strong despite a past that saw patrician protagonist of the complaint against her son Nicola. Also in the third week, Nicola Pisu gets very close to Soleil Sorge and confesses to Alex Belli that he has taken a crush on the girl.

Nicola also confesses to Soleil of having a soft spot for her during the live broadcast on October 8, Soleil remains vague saying that she has stopped breaking hearts. Soleil is also advised in this regard by Manila Nazzaro who does not believe that Nicola could be the right guy for her. Patrizia Mirigliani is very disappointed by Manila’s words, so much so that she makes a post on Instagram that says “even the misses fall the crown”. We remember in fact that Manila has known both Nicola and Patrizia well for several years.

Nicola after receiving a veiled refusal from Soleil Sorge he kisses Miriana Trevisan for fun. After the kiss for fun, however, Miriana and Nicola sleep together giving rise to what is possible beginning of a sympathy between the two. During the fourth week of the program, Nicola confesses to Miriana that he is very attracted to her and speaking with Miriana said

“If I like you, just like you. I’m very into you, you can see it, you understand it too “

Nicola confirmed to want a serious relationship while Miriana says she is confused by the speed with which things are happening. Nicola has definitely integrated with the rest of the house and thanks to the strong interest he feels for Miriana he lets himself go and show her character and her way of being: in the episode of November 15th Alfonso Signorini talks about the nascent relationship between Nicola and Miriana.

The words of Andrea Casalino, eliminated in the second week, they warn Nicola da Miriana: the woman would be interested in Andrea and Nicola would be just a fallback.

In the day of 21 October a news breaks on social media: Miriana seems to be engaged outside the Big Brother house (some photos document the situation): many therefore insinuate that Miriana is making fun of Nicola. There are no confirmations but Patrizia Mirigliani she immediately took sides in defense of her son, telling him not to be fooled.

Patrizia returns to the GF house for the episode of 25 October: she clarifies her words directly to her son Nicola, specifying that she has nothing against Miriana but that he must be aware of how things are, not to rush too much because Patrizia doesn’t want Nicola we feel bad still suffering.

Nicola Pisu in the house he has an accident, which causes him an infringement of the coccyx. Nicola resists the pain but in some videos you can see how he is taken around by some tenants of the house (Alex Belli and Manila Nazzaro in particular) who belittle his injury. This has raised several controversies on social media. Nicola Pisu in the episode of November 5 risks elimination being nominated with Soleil, Ginamaria and Jo. Nicola manages to win televoting and Jo Squillo gets out.

Nicola Pisu during the Red Party evening on Saturday 6 November he seems to have cursed: or rather Nicola used a common jargon equivalent but not precise, which sparked complaints from part of the public. Is he at risk of disqualification?

The first evening episode of the ninth week sees Nicola nervous: the episode of November 8 was the worst for him, he was rejected shortly before the start of the evening from Miriana who only confirmed his friendship, although unnerved, he did not greet the showgirl when she returned from the mystery room where she was able to see a video sent by her son. Such a moment important for Miriana that Nicola, at Alfonso’s specific request, he downgraded to a “I don’t feel like hugging her”. This first sign of nervousness is then confirmed towards the end of the episode at the time of the nominations: Nicola and Miriana in fact argue live and he who feels rejected by Miriana tells her “You deserve a person who treats you badly“. This sentence arouses the indignation of those present who immediately dissociate themselves.

Nicola is nervous, he is emotionally addicted to Miriana and when things don’t go wrong he is grumpy and grumpy. For this reason Nicola Pisu is nominated and risks elimination in the episode of 12 November. While waiting for the episode, Nicola spends a lot of time in bed, and confesses that he doesn’t know if he wants to stay in the house due to the presence of Miriana who makes him feel bad. It is eliminated in the episode of 12 November losing the televoting against Gianmaria Antinolfi by 1 percentage point.

Nicola Pisu’s instagram profile is brand new and on the bio the boy wrote:

“Every ending has a new beginning”. I start from here, from the little things, from the beauty of normality.

At the moment a competitor of Big Brother Vip, Nicola Pisu’s instagram profile is updated weekly on his experience in the house and now has almost 15,000 followers. 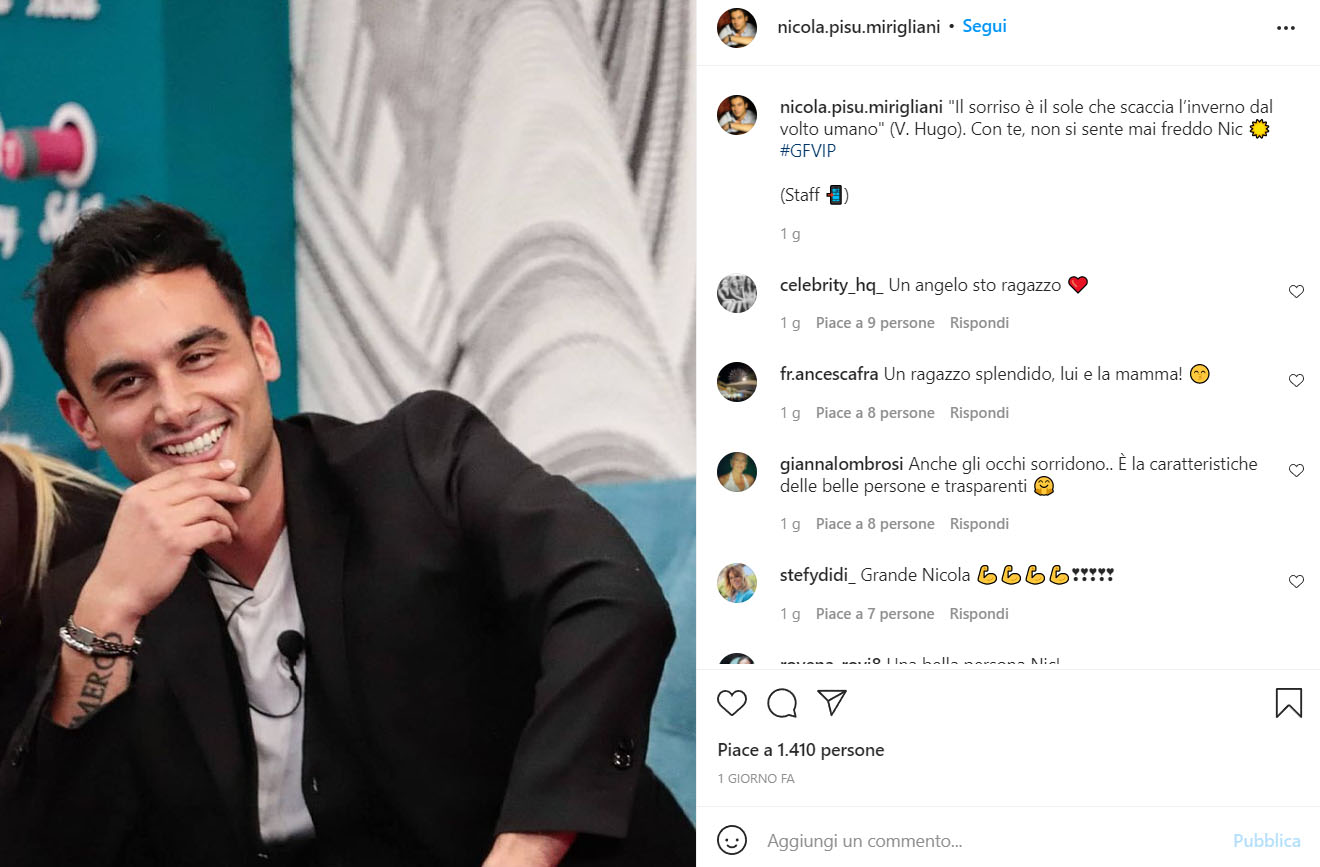