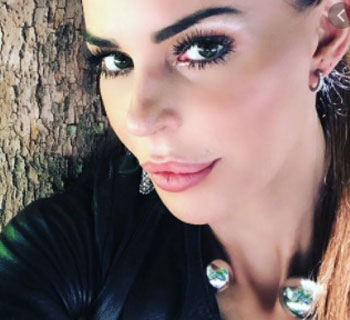 Nina Moric is a model of Croatian origins and showgirl, who owes her fame in Italy mainly to the troubled relationship with the former king of paparazzi, Fabrizio Corona. She is currently one of the protagonists of Barbara D’Urso’s sitting room, to tell her love affairs. At the moment he is at the center of a story that sees his ex as the protagonist Luigi Mario Fabulous and his current partner Elena Morali.

Who is Nina Moric?

Nina Moric was born in Zagreb on July 22, 1976 (precisely on Thursday) under the zodiac sign of Cancer. Both parents are established professionals in the academic field, the father MIrko Moric in fact is a well-known mathematician, the mother instead Vranka is a respectable economist. Nina is not an only child, in fact the model has a sister named Tina born in 1973. On many occasions Nina has declared that not having a good relationship with his familyprobably the parents imagined a different future for their daughter.

In an interview with Vanity Fair in 2016 Nina stated to suffer greatly from this controversial relationship with their family. The model also specified that the tension with the family derives also and above all from her being a divorced woman. Nina’s mother cannot accept the failure of the sacred bond of marriage. Still in the same interview he specified that on the occasion of the Christmas and summer holidays prefers not to be with loved ones just to avoid quarrels. Regarding her studies, Nina after having obtained her diploma decides to undertake the university course by enrolling in the Law course. Unfortunately, she soon realizes that this is not the right path for her and abandons her studies to devote herself body and soul to her passion or fashion.

Nina Moric is a model of Croatian origins who has received enormous success in our country thanks to her beauty and her talent on the catwalks. His career in fashion world begins in 1996 year in which she participates in the “Look of the Year” competition where many notice her for her beauty and character. After this experience Nina begins to get noticed in some underwear advertising campaigns. In 1999 he appeared in the music video of the hit song by Ricky Martin “Livin la vida loca”. Subsequently Nina decides to move to Milan, the fashion capital, here she is lucky enough to be noticed by Gianni Versace. Thus began her international career in the world of fashion by parading on catwalks all over the world and wearing the garments of designers of the caliber of Cavalli, Calvin Klein, Valentino, Richmond and Versace. In the early 2000s Nina stands out by posing naked on Max and For men. In 2011 he also participated in some reality shows such as “the recommended” and “the island of the famous” where the following year he returned as a commentator. In subsequent years Nina is constantly invited to various television programsvi, especially the salons of Canale 5, and in 2017 it also appears in the world of politics becoming a member of Casa Pound.

Nina Moric she is famous not only for her catwalk shows but also for her love stories and the constant gossip that see her as the protagonist. His name is related to that of the king of paparazzi Fabrizio Corona (son of Vittorio Corona and Gabriella Privitera), the two have been together for 6 years. From their love even a child is born, Carlos Maria Corona. Their love is tangled with quarrels and conflicting passions. Although the paths of the two have finally divided, both have remained in good relationship. After the divorce with Corona, Nina has several flirts with famous people, surely the most troubled love story after Fabrizio is the one with Luigi Mario Fabulous.

Nina and Fabulous have been together for well 4 years, after an alleged betrayal of him she decides to leave him. However, their story does not end here, in fact both have been invited several times in various broadcasts to clarify what happened. In the middle there was also the alleged “disappearance” of Luigi Mario Fabulous, who has become unavailable even to his mother after a betrayal of Nina with her best friend. Currently Nina accuses Fabulous of having beaten and mistreated her for years, while he firmly denies the allegations.

Nina Moric on July 15, 2020 announced that she is dating the entrepreneur Vincenzo Chirico for about two months. The relationship is serious even if she still admitted that she did not introduce the man to his son Carlos. Nina talks about Vincenzo as a person who does not need visibility, of Neapolitan origin, she manages sports clubs and hotels. He lives in Montecarlo and is about 45 years old.