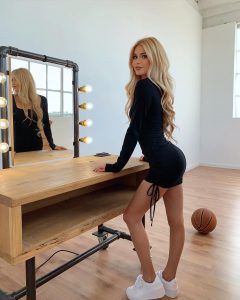 How much money does Pamela Reif have?

Pamela Reif is a German influencer who also works as a model. The Karlsruhe native was born on July 9th, 1996 and after graduating from high school, she decided to pursue a career as a web video producer. The German now has over 4.9 million subscribers on the world’s largest video platform, YouTube. In their profiles, everything revolves around the topics Fitness and healthy lifestyle. Since the influencer does not disclose the income from her advertising cooperations, only estimates are possible. The cherished Pamela Reif’s net worth is € 4 million.

Reif was born in Karlsruhe and grew up in her hometown as well. She started her career on the social media platform Instagram while she was still at school. On the then rather unknown photo service, she mainly published landscape photos and food photography. In the meantime, the influencer graduated from high school with an average grade of 1.0. After three years, Pamela Reif reached the 500,000 follower mark and realized for herself that Instagram could be the beginning of a long career. Instead of studying business administration, she was successful in influencer marketing.

In 2020 Pamela Reif established herself as one of the most famous German influencers. She describes herself as Perfectionist who also likes to take countless pictures to catch the perfect motif. Almost 5 million subscribers on YouTube and over 6.5 million followers on Instagram speak for themselves. Her first paid cooperation was in 2014 – there she received $ 50 from an Australian tea company to promote the tea varieties. Over the years Pamela Reif’s marketing has become more professional. Today she uses the lucrative social media business par excellence.

In the course of her career, Pamela Reif decided to work with various companies. Her followers appreciate the authenticity of the influencer, so that there were regular server break-ins when the Karlsruhe-based woman advertised new products. Hej Natural, Foodist and Puma were the first collaborations. Over time, well-known companies such as The Rainforest Company, Calzedonia and Warner Music Germany were added. Sponsored posts and advertising revenue are the main sources of their wealth. In addition, she develops her own product creations monthly YouTube earnings are around 65,000 euros, on Instagram she receives between 5,000 and 10,000 euros with her number of followers for a sponsored post.

Pamela Reif doesn’t just see herself as an influencer. Rather, she wants to be perceived as an entrepreneur and tries to constantly expand. In her career she has published two books. Your first work Strong & Beautiful has been sold over 40,000 times. The second book You Deserve This twice as often.

A small shadow spot in her successful career is a lawsuit for surreptitious advertising from 2019. The Berlin Association of Social Competition had applied for an injunction in three cases. The court ruled that Pamela Reif may not link any brands in their photos without clearly marking them as advertising. This had no effect on Pamela Reif’s success – from now on she marks her posts as advertising and the number of followers continues to grow.

At home with the parents

Unlike many influencers, Pamela Reif has not been drawn into the big wide world to this day. With her fortune of several million euros the fitness YouTuber still lives with her parents. She herself describes Karlsruhe as her haven of peace far away from the hectic everyday life of social media. Her relatives and friends also help her manage the influencer business perfectly. In the meantime, the Karlsruhe woman had professional support, but then decided against permanent management from outside. In the meantime, Pamela Reif is holding the strings in her hand in matters of management again – with the active help of her brother Dennis.