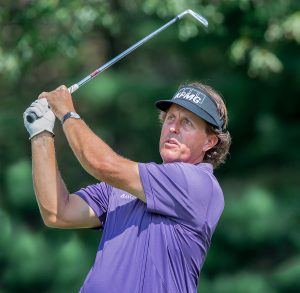 How much does Phil Mickelson earn?

Phil Mickelson is one of the most successful golfers of all time. The American has won five majors and around 40 other PGA tournaments in his career to date. In the all-time money list, he is second behind Tiger Woods. In the world rankings, too, he always stayed behind Woods and never conquered the top spot. In 2012 he was inducted into the World Golf Hall of Fame. The cherished Phil Mickelson’s net worth is € 340 million.

In the ranking of the professional golfers who have won the most prize money in the course of their careers, Phil Mickelson takes second place with around 80 million euros (behind Tiger Woods with more than 100 million euros). However, Mickelson owes most of his fortune to sponsorship agreements. He is financially supported by Rolex, Ford, ExxonMobil and Titleist, among others. From 2001 to 2016 there was also a partnership between him and the financial services provider Barclays.

Since Mickelson successfully fought the joint disease psoriatic arthritis with the drug Enbrel in 2010, he has also been promoting it – including in TV spots. According to the US magazine “Forbes”, Mickelson was in the top 10 best-paid athletes in the world from 2006 to 2016. In 2014 alone, he took in around 45 million euros, with his prize money “only” amounting to around 1.8 million euros.

The following tournament prize money has been won by Phil Mickelson in his golf career to date:

Even before Phil Mickelson started school, he learned to play golf from his father. Despite being right-handed, he got used to playing like a left-handed player because he was copying his left-handed father. After graduating from high school in 1988, Mickelson attended Arizona State University on a golf scholarship. Between 1990 and 1992 he was honored three times in a row with the Haskins Award for the best college golfer in the USA. With the three NCAA Golf Championships, which he won in 1989, 1990 and 1992, he also holds the record for the most wins at this tournament to this day. In January 1991 he even won his first professional tournament, the Northern Telecom Open – although he started as an amateur.

The long-awaited victories in major tournaments

After graduating from Arizona State University in 1992, Phil Mickelson became a professional golfer. From 1993 to 1998, he won at least one tournament each year on the PGA Tour. He ended 1999 without a tournament victory, but at the end of 2000 he won the Tour Championship, one of the best-endowed competitions in professional golf. A victory at one of the biggest tournaments, the majors, was initially denied Mickelson. That changed in 2004 when he won the Masters two strokes ahead of Tiger Woods.

A year later he won the PGA Championship, followed by two further triumphs at the Masters in 2006 and 2010. After winning the Masters in 2010, Mickelson had the opportunity to push Tiger Woods from the top of the golf world rankings in no fewer than twelve tournaments. Still, he didn’t succeed. For this he won the British Open in 2013. He belongs to the select group of golfers who have won three of the four major tournaments in their careers. With five major titles, he is currently (as of the end of September 2020) the second most successful active player after Tiger Woods.

Popular with the viewers

Phil Mickelson is considered one of the most spectacular players on the PGA Tour. He has his weaknesses when it comes to teeing off, but he often compensates for them with his putts. With these short shots near the hole, Mickelson has been proven to be one of the best golfers in the world. Thanks to the way he plays, he is very popular with the audience.