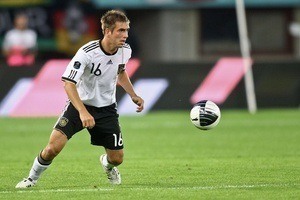 How rich is Philipp Lahm?

The professional footballer and former national player Philipp Lahm, who was born in Munich on November 11, 1983, is one of the most successful and well-known German football players. With a estimated fortune of 60 million euros he is also one of the former, richest footballers in the world. Of course, this group is highly exclusive, where the top is still led by the exceptional earners Lionel Messi and Cristiano Ronaldo.

At his club FC Bayern Munich, the defender recently earned around 10 million euros a year base salary, which is upgraded a lot through bonuses and, above all, high-value advertising contracts. Lahm also used his great popularity for various charitable purposes and in this context also founded the Philipp Lahm Foundation, which he endowed with a capital of € 150,000 out of his own pocket. On February 7, 2017, Philipp Lahm announced the end of his career. He did not fulfill his current contract until 2018 and hung up his football boots at the end of the 2017 season. Contrary to the rumors, he will not become sports director at Bayern Munich.

Philipp Lahm as a startup investor

The professional footballer has definitely made provisions for the end of his career because he has invested his money well. He is active as a startup investor and has a holding in several companies. He even wants to work actively for the Berlin agency “Die Brückenköpfe”. Philipp Lahm’s startup investments:

The career of Philipp Lahm

Lahm’s career was mapped out early on. At the age of only six he played for the Free Gymnastics Association in Munich-Gern (FT Gern) and switched to At the age of 12 in the youth team of FC Bayern Munich – a considerable step for the little lame who should, however, lead the way. Nevertheless, Lahm should first play with the amateurs and convince others of his talent there. After two years in the regional league, his coach at the time recognized Lahm’s talent and awarded him to the VfB Stuttgart, where he successfully participated in a Bundesliga match for the first time in 2003. He was able to quickly convince VfB Stuttgart of his above-average talent there, so that he quickly became an integral part of the club’s regular A-team.

Finally Lahm played from 2005 back for the club where it all started, namely at FC Bayern Munich, where it was used in 2006/7 not only in some, but in all Bundesliga games. Among the many different coaches in his Bayern career such as: Felix Magath, Ottmar Hitzfeld, Jürgen Klinsmann, Louis van Gaal, Jupp Heynckes and the current coach Pep Guardiola, he was always able to convince with his game. The Bayern captain extended his contract prematurely until 2018, thus announcing the end of his career. He officially stated that this would definitely be his last professional contract. We will see…. 🙂

Because of his great talent, Lahm was of course also used on a national level. Since the international match between Germany and Croatia in 2004 he has been regular part in the German national team. There he should finally also under national coach Jogi Löw captain – initially in 2007, when the then captain Michael Ballack was out due to an injury, and later he was formally appointed to this position. In Brazil, he and his colleagues were able to secure the world championship title and of course high premiums from the national team in 2014.

Philipp Lahm’s fortune with its numerous advertising deals (including for Head and Shoulders) about 60 million euros. However, Lahm does not spend his money to the fullest, but rather traditionally and risk-averse diversified it into various investment products, including real assets. He entrusts the majority of his assets to fixed-income products from two Munich private banks and of course to the startups in which he is invested.

In addition, like many other stars, Lahm primarily invested in real estate. So he owns in the State capital of Bavaria a luxurious property, where he doesn’t live all year round, in order to be able to switch off from the noise of the city every now and then. In order to do this and to be able to enjoy a little more privacy, he acquired At the Tegernsee there is also a luxury villa including a golf course. The price of the property was not published. However, real estate prices at Tegernsee are around € 11,000 per square meter. The imagination leaves a lot of room for calculations.

In addition to the material assets, Lahm says he spends his money rather moderately, treats himself to a luxury vacation every now and then or goes out to eat with friends.