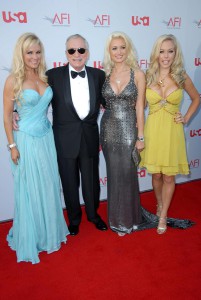 How rich was Hugh Hefner?

The men’s magazine Playboy made Hugh Hefner not only world famous, but also a millionaire. In addition to the magazine, Playboy offers a variety of merchandise items with the popular bunny. The shrewd businessman has found many lucrative sources of income for himself. And he needed that too. Because in the Playboy Mansion he employed a number of personal employees. His exotic animals, which he kept in a villa like a kind of zoo, naturally wanted to be cared for along with all his bunnies. Overall, Hugh Hefner leaves an estimated at the time of death Assets of 42 million euros. By the way, he bought his grave at the age of 82, which is right next to that of the sex idol Marilyn Monroe. Hugh Hefner died of natural causes in the Playboy Mansion on September 27, 2017 at the age of 91. Celebrities, fans and many people around the world mourn Hugh Hefner, he will certainly not be forgotten.

Hugh Hefner left a great fortune and empire behind

The Playboy founder leaves an incredible empire and wealth behind. He leaves a total of six children and his wife, among whom the property will probably be divided. He got engaged to model Crystal Harris in 2011, the engagement broke off four days before the wedding. The two had an age difference of 60 years. They quickly found each other again and finally got married, namely on December 31, 2012. His gigantic fortune now has to be shared by his wife Crystal and his six children. Hugh Hefner had an extravagant lifestyle and enjoyed his time to the full. He said that he was turning life into a festival, it was all over too fast and life should be more than a valley of misery. Hugh certainly succeeded in this and we will keep him fondly as he was.

The mansion is owned by Playboy Enterprises, in which Hefner held 35% until his death. But he himself paid over a million dollars a year in rent. In 2016, the Playboy Mansion was slated to sell for $ 200 million. In fact, the villa was sold for “only” 100 million dollars by billionaire investor Daren Metropoulos. However, Hefner received one lifelong right of residence. What will become of the Playboy Mansion now remains to be seen.

Although the Playboy boss spent large sums of money every year on his famous Playboy party, he had enough money to still have provisions for his old days. It has always been not just Hugh’s charm, but also his great fortunewhat attracted women like moths. Numerous marriages proved that Hugh Hefner took his role as a playboy seriously and led a life exactly as one would have expected of a person with his status.

The beginning of the men’s magazine

Hugh Hefner has achieved something that not many people have been able to do. There is no other men’s magazine that is so popular and in which women want to be photographed so much. In the USA, a real Playboy cult has emerged, which is also about the smart Editor-in-chief turned himself. Hefner was born as Hugh Marston Hefner in 1926 to a modest family in Chicago and had a younger brother named Kevin.

His father was an accountant by profession and therefore a solid, very sensible man. So the current Playboy boss couldn’t hope for the support of his father Glen when he asked for money to start his men’s magazine. But his mother Grace did not refuse his request and loaned Hugh Hefner 1,000 US dollars to fulfill his dream of becoming a men’s magazine, Playboy. Hefner had previously studied psychology at the University of Illinois and received his Bachelor of Art there in 1949. In 1951, Hefner took up his position at Esquire magazine, where he worked as a copywriter. His varied experience in the advertising industry was of course worth its weight in gold when the Playboy magazine was founded.

The birth of “Playboy”

In the spring of 1953 he finally made the decision to set up his own magazine. Marilyn Monroe was his first cover girl. Hefner bought the revealing photo of the icon for only $ 500 from a small, lesser-known publisher that produced erotic calendars. the First edition consisted of 50,000 copiesalthough the Playboy founder couldn’t imagine whether he would sell them all. Today the first edition of the Playboy is worth a small fortune. The first Playboy sold like hotcakes for 50 cents a piece and it only took five years for Playboy to reach a circulation of one million copies. Not entirely without a stir, of course, because in the ultra-conservative USA the magazine was seen as an attack on the church and family as institutions in themselves.

The center fold also catapulted Hugh Hefner into Olympus. Because the pop-up picture in the middle of the Playboy, which will henceforth be called sexy pin-up photo found in many American lockers was just his idea and turned hosts of men into die-hard Playboy fans. Although the magazine also had to go through a few crises, the group is now very solidly positioned, which is mainly due to Hefner’s daughter Christie. In the 1980s she took over the reorganization of the group, which now sees itself as an entertainment company. In addition to the magazine, Playboy also operates two television channels of its own. It also sells tons of merchandise with the famous Bunny logo and has established itself in the DVD and video sector.

Private: The Marriages of Hugh Hefner

Where Hugh Hefner was, sexy women weren’t far away. Because even if he was married again last, his mansion was always the hotspot for the most beautiful bunnies in the world. Hefner’s first marriage took place in 1949 when he married a fellow student from college in Chicago. He had two children with Mildred Williams, with one of the two daughters dying in childhood. Hefner’s first marriage lasted 10 years. Before he got involved in a second marriage, Hefner enjoyed his life as a playboy who liked to flaunt himself for 30 years. Kimberly Conrad, who was over 35 years younger than Hefner himself, became the playboy’s second wife in 1989. In the same year she was also Playmate of the Year. the Playboy editor-in-chief’s second marriage lasted 11 years and was also blessed with two children. In addition to these four legitimate children, Hugh also has two illegitimate children.

No sooner had Hugh Hefner separated from his second wife than he gathered many Beauties around them. They moved into the Playboy Mansion and were all between the ages of 18 and 28. In 2005, however, Hugh Hefner reduced this number to three, which are known as “The Girls of the Playboy Mansion“Also featured on the TV show. Former Playboy friends Kendra Wilkinson and Holly Madison are still TV stars today. Chrystal Harris and the Shannon Twins then became the understudy. While the separation from the twins followed less than a year later, Crystal Harris stood by Hugh Hefner’s side until the last hour. The couple announced the engagement in late 2010 and tied the knot in December 2012. The model Crystal Harris was a stately 60 years younger than Hugh Hefner. His love for young women lasted to the last, may he rest in peace.