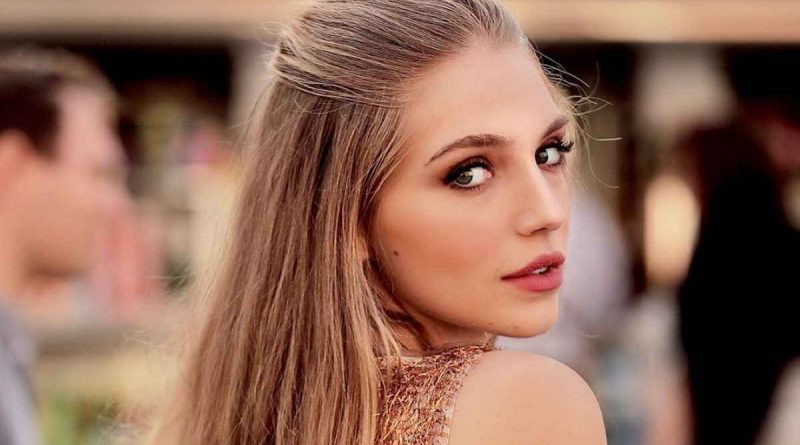 Federica Lucaferri she is 23 years old, she is Roman, beautiful and humble. Today he is in the second year of Experimental Center of Cinematography in Rome and has only his great passion in mind: acting. Busy on the set of Baby and already seen in Poor, but very rich by Fausto Brizzi, focuses on studying and aspires to large projects. We interviewed her for you and below you will find what she told us!

Federica, you are a young actress. And right now, as we speak, you are in the academy. What made you realize this was your way?

First of all I would like to say that I am an aspiring actress, I do not define myself as such yet because the road is very long. It all started as a game; I was studying Law – I started right after high school, but I always did a lot of auditions, even when I was little; it was my parents who first brought me to make them. I honestly was a bit reluctant, but I continued to do auditions anyway, even in the period of high school and university … I was always very attracted to this world. And just by doing several auditions I got a very important role: that of Tamara in Poveri, but very rich with Brignano and De Sica. Being on set a lot and even going on days when I didn’t have to shoot scenes, I realized that I couldn’t let this be just a simple hobby. Acting thrilled me, it amused me, I felt full, it made me feel good. So I said to myself «I’m young, I can believe in dreams and in achieving my goals», obviously this one had and needs training. For this reason I decided to study seriously, with the role of Tamara I went even though I had never studied, but I also wanted to do it to detach myself from that type of character. So I tried to enter the Experimental Center, they took me immediately and for this I temporarily removed the university path, to concentrate full time on acting.

And where do you see yourself five years from now?

I hope I can play very different roles. Up to now I have had the opportunity to play roles in my strings, I have never had the opportunity to play a character who was so different physically or in the way of being and therefore I have tried little in always seeking something more, applying myself more. , study more and find something new every time. I would like to play different roles in both drama and comedy; being able to be different people through the characters I play.

Despite you are so young, you already have two good achievements in your resume: the first we mentioned before, is Poor, but very rich by Fausto Brizzi, with De Sica and Brignano, and the other is Baby, directed by De Sica. Would you like to tell us about these two experiences? Have you noticed any differences between the set of the film and that of the television series?

Yes, also because the number of characters between the film and the series was obviously different. In the film we were a group and our story was told; it was us and we had a lot of time. In the series, however, not being the protagonist, I have less space, as well as the other secondary actors, precisely at the narrative level. So yes I notice several differences, even in production times: a series for obvious reasons goes much faster, there are so many things to do, so many stories to close.

About Baby, take away a curiosity, how is the environment on the set?

It is quiet on set. We guys made up a group and we also met off the set for dinners, before reading the script, at the end of production parties… there is a good atmosphere. Obviously when we are on the set we are all more detached because we are focused on what we have to do, but there is always the opportunity to joke with each other, especially in the breaks. Then there is also to say that we are practically all peers and this obviously unites us and amuses us.

You in Baby you are Virginia, Niccolò’s historical girlfriend, and in this second season you have had the opportunity to make your character known a little more. Do you feel close to Virginia or are you completely opposite?

I’m definitely not as bad as she is. I always try to be calm before acting like Virginia. We share the fact that we are both people who say things to their faces. She does it with the protagonists she can’t stand and I do it in everyday life: I can’t make a good face and a bad game, if I don’t like you, you understand it or I’ll tell you directly. Another thing that unites us is certainly the fact that we are always willing to keep the people we love close to us; Virginia may be mad, but she is in love. And even in love I am willing to do anything. Virginia also hides a fragility, Niccolò is her foothold and although she wants to be the most beautiful in the school, the most desired, however inside she hides a tender and sensitive side, like everyone and obviously also like me.

If I could choose another character from Baby to interpret, what would it be?

I believe the character of Chiara. I must say that the role played by Benedetta Porcaroli and Alice Pagani is very interesting and very beautiful; a double life at school, with friends, in the family and then the dark side and hidden from everyone, which only you and some person with whom you are extremely close know. It is very interesting at the acting level to show these two aspects.

What is the best thing that has happened to you since you started this journey? And which is the ugliest?

The best thing is to hear me say “You have been hired for this role”; it is an emotion that cannot be explained: you take a lot of no’s and sometimes you get discouraged, but inside you have this passion and you want to succeed at all costs. The worst thing is always linked to this, especially the way this job works: maybe you take two roles in the same period, you like them both, but often the times and days you shoot coincide, so inevitably you have to find yourself at abandon one and greet a character with whom you have empathized, whose story you have told … and that is the reason why you have been taken. But it’s really bad when you get attached to a character and you have to greet him without being able to give him life as you wanted. But unfortunately this is how it works.

If you were asked to do any reality show, would you accept?

Not now. Right now I want to focus on my studies and work in the sector in which I am specializing, tomorrow who knows. I’m open to anything, even to put myself on the line, so who knows!

I really like Paolo Genovese and Paolo Virzì, I madly loved La pazza gioia, with Ramazzotti and Bruni. It is a film that helped me a lot to prepare the monologue that I brought here to the center and for which I was chosen. However, there are many directors with whom I would like to work.

POP for me is being explosive, being charged with a positive energy that can also give strength and vitality to the people around us.