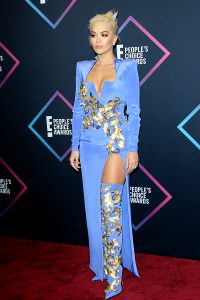 How rich is Rita Ora?

The singer Rita Ora from Kosovo is currently one of the most successful musicians in Great Britain. By 2018 she released two albums and landed at the top of the UK charts with several songs. In addition, she is active as an actress and has been in the three parts of the shades of greyRow to see. The cherished Rita Ora’s net worth is 25 million euros.

This is how Rita Ora generates her million dollar fortune

As a singer, Rita Ora makes most of the money with her music. In addition to sales of phonograms and downloads, concerts are an important source of income for her, with which she builds her fortune. Ora opens regularly Tours, the biggest so far on the occasion of the release of their album Phoenix led them to 53 cities around the world from March 2019. In addition, Ora receives Gagen as an actress and does advertising. Among other things, the sporting goods manufacturer JD Sports, the mobile communications provider EE and Deichmann are among the companies that have already signed the artist as a testimonial. In 2014 and 2015 she designed her own collections of clothing and shoes for Adidas.

Not ready for the ESC

Rita Ora was born in 1990 as Rita Sahatçiu in Pristina, today’s capital of Kosovo. A short time after she was born, she emigrated to London with her family. There, her parents added “Ora” to their family name to make pronunciation easier. Rita Ora started singing at a young age and performed in London pubs as a teenager. In 2008 she applied to participate in the British preliminary round for the Eurovision Song Contest 2009. Although she was selected, she withdrew her application a little later because she did not feel ready for the challenge.

Entry at the top

In 2009, Rita Ora signed her first recording deal and then recorded her debut album. This was called Ora, was released in August 2012 and entered the UK charts at number 1. She also placed her first two singles How We Do (Party) and RIP at the top of the UK’s sales list. From 2010 to 2016 she was under contract with Jay-Z and Roc Nation, and since 2017 she has a contract with Atlantic Records. The song Hot Right Now, which Ora recorded with DJ Fresh, reached number 1 in the charts shortly before her solo singles. So the singer landed right away with their first three releases at the top of the UK music rankings.

Your second album Phoenix launched Rita Ora in November 2017. It contained the song Let you love me, which the artist released as a single in September 2018 and reached number 4 in the charts. With that, Ora set one Record on: no British solo artist before her managed to place 13 singles in the top 10 of the charts in their home country.

Rita Ora is not only active as a singer, but also as an actress. She was in the film back in 2004 Spivs and in an episode of the series The letter to see. Yours so far Ora had the greatest role in the shades of greyTrilogy in which she is Mia, the adoptive sister of the main male character Christian Gray, embodied. She was also in the films Southpaw (2015) and Pokémon Detective Pikachu (2019) to see. In addition, Ora is a regular jury member in casting shows. She was a juror in 2012 and 2015 The X Factor and has been on the jury of Masked Singer UK.