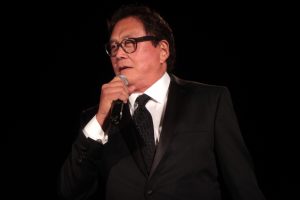 How rich is Robert Kiyosaki?

Robert Toru Kiyosaki is a native American and known as a bestselling author. In his books everything revolves around the subject of “self-help” and “financial education”. To date, his works have been sold more than 26 million times. The Hawaiian also offers seminars and workshops. The goal of Robert Kiysosaki’s teaching is to build up a substantial passive income so that he can live his life entirely from these sources – this is possible for him even today. The cherished Robert Kiyosaki’s net worth is € 85 million.

Robert Kiyosaki was born on April 8, 1947 in Hilo, Hawaii. His parents were American of Japanese descent. After his childhood and youth on the American island of Hawaii, he graduated from the US Merchant Marine Academy in New York. He then joined the US Marine Corps. After he retired in 1974, Kiyosaki joined the Xerox Corporation – where he made his first sales experience. Nonetheless, Robert Kiyosaki was involved as an entrepreneur at an early age. However, his first attempts at entrepreneurship failed. Then the Hawaiian began his first seminars. These bore the title “Money & You” – financial education was his focus from an early stage.

Robert Kiyosaki began his successful existence as an author in the late 1990s. At first he published the books on his own. The publishing house Warner Books later took over the books – another company was founded. Cashflow Technologies is the company behind the Rich Dad brand. The best-known book by the bestselling author is Rich Dad Poor Dad – This is a self-help book that aims to change the perception of money and assets. In his work, Kiyosaki contrasts two different types of fathers. One leaves him only debts, the other invests his lower salary in a targeted manner in order to sustainably increase his wealth. In the years that followed, numerous other books on finance and education followed.

The contents of his books and the teaching of Kiyosaki indicate the importance of passive income. With real estate or company investments, it is possible to generate a passive cash flow so that you can later earn your own living from these funds. Kiyosaki succeeds in illustrating this by comparing assets and liabilities. Assets are items that generate income, while liabilities are the items that only cost money.

The Rich Dad Network is a community that helps Robert Kiyosaki generate huge income. The Network consists of numerous podcasts, webinars, seminars, books and other types of financial content. Some offers are free, while other seminars or training courses are expensive.

Robert Kiyosaki is married to his wife Kim. She moved to Hawaii for college. While working as an employee, she realized that she was striving for financial freedom and would like to leave the hamster wheel – something in common with her husband Robert. The two met in 1984 and started working together straight away. Kim Kiyosaki has published the book “Rich Woman” – The couple invests together in real estate and companies.

Critics and opponents of the investment guru like to point out the bankruptcy of his company. In 2012, Kiyosaki’s company went bankrupt. The bankruptcy caused considerable damage to the image of the native American. Nonetheless, Kiyosaki rebuilt the Rich Dad Network over the next few years. In addition, the close connections to multi-level marketing organizations cause criticism. However, this should not hide the fact that Robert Kiyosaki is one of the most successful financial education providerst and has built up a gigantic fortune.