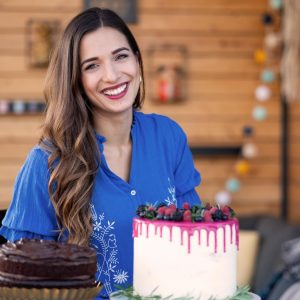 How rich is Sally Özcan?

With a nut braid recipe for a million dollar fortune – that is the short version for the secret of success of Sally’s world. Of course, it took more than a braid of nuts to become a multi-million dollar empire, but this recipe video posted on YouTube on April 11, 2012 was the cornerstone. Behind Sally’s world is Saliha Özcan from Bruchsal, German-Turkish teacher, entrepreneur and video producer. Your YouTube channel Sally’s world is the most successful channel for cooking and baking in Germany. The cherished Sally Özcan net worth is 6 million euros.

As a teacher to head an empire

Sally Özcan grew up with four siblings as the daughter of Turkish immigrants. Her girl’s dream was to become a teacher and start a family. Both quickly became reality, because after graduating from high school in 2008, she completed a teaching degree and married her childhood sweetheart Murat at the age of 19. Daughter Samira was born two years later. While practicing her dream job as a teacher, she also found that many young people have very little knowledge of cooking and baking. She had already learned a lot from her mother as a teenager and now wanted to show in a video how easy it is. The small family’s money was tight, and husband Murat only found out later about the 69 euros invested in a digital camera. The first video from the home kitchen went online in 2012 and was about the nut braid mentioned above. A day later, over 1,000 people had seen it.

Her educational training apparently also paid off in that she could easily explain recipes and ingredients to her viewers and her fan base grew steadily. The ZDF show Pot hunter ensured that the number of subscribers to her YouTube channel soared. Sally Özcan won the final of the hobby cooking show together with a friend and was able to take home 10,000 euros in prize money. Now, husband Murat was also convinced that his wife’s YouTube channel had potential.

It was also he who helped Sally to her first collaborations with companies whose products are based on Sally’s world were advertised. Murat also created an online shop for his wife’s YouTube channel, which started with incredible success: On the first day, goods worth 25,000 euros were sold. Around 1000 items are now sold in the online shop every day. In 2014 Sally’s world had already turned into a small business with 30 employees.

The videos for Sallys Welt were no longer shot at home, but in a studio kitchen in Waghäusl, supported by a professional crew. That’s where the Consequences for Sally is baking and Just Sally filmed, which were broadcast on VOX from 2017.

Sally has now written a total of five cookbooks and operates a second channel on YouTube, Sally’s world of technology. Here she explains her technical aids such as kitchen machines, household appliances and other tools in an easy-to-understand way. In addition to cooking and baking, topics such as bringing up children (the second daughter Ela was born in 2015), house building and household tips have found their way onto their main channel. The YouTube Channel Sally’s world has almost 2 million subscribers, and the trend is rising. the YouTube merit of Sally’s world is around 20,000 euros per month. However, Sally Özcan’s main income comes from the online shop. Sallys Welt is one of your most successful YouTube channels in Germany, so she moves in spheres with Bibi’s Beauty Palace and Dagi Bee.

Sally Özcan trusts that she can establish herself as a stationary retail brand and so on Recently, six million euros flowed into a 3,000 square meter innovation center with a showroom, restaurant and flagship store. The empire Sally’s world So it continues to grow and Sally Özcan is expanding her fortune with it.