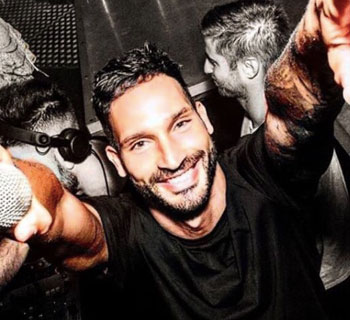 Sammy Hassan it’s a vocalist, a model and television personality, known to the public for being the suitor of Giovanna Abate in the 2020 season of Men and Women. Previously he was one of the singles that animated Temptation Island 2019 and a Carramba Boys by Raffaella Carrà. Sammy courted Giovanna Abate up to the choice you find in the dedicated paragraph.

Who is Sammy Hassan?

Sammy Hassan is an Italian model, born in Rome on June 26, 1985 under the sign of cancer. He has Egyptian origins from his father, for this reason the surname Hassan which clearly could not have totally homegrown origins. He currently lives and works in Milan but, as his tattoos dedicated to the city of Rome also make clear, he is still very attached to his hometown. What we know about him also comes from his presentation for Temptation Island 2019: he worked as a model in the fashion world and as an animator during the evenings in the nightlife clubs. Since February 2020 he has been wooing Giovanna Abate on the throne of Men and women.

Sammy was married when he was very young with a woman from whom she had her son, Christian, who never fails to always be present in Sammy’s life. The marriage lasted more than four years. His role as a father was one of the most detailed by the tronista Giovanna during the episodes of Men and Women: understanding the relationship between Sammy and his ex-wife as well as his habits as a parent is very important to get to know a person thoroughly and Giovanna knows this.

Sammy Hassan attended in October 2019 Lidia Vella: as per the indiscretion of Deianira Marzano, Lidia and Sammy met and dated for a few months. Lidia confirmed the rumor adding that the story between the two ended for a very specific reason: “You know me, you know I hate lies. I don’t tell her. Also because when I went out with this person he was single. Yes, it’s all true. I had undertaken this knowledge, I find nothing wrong with saying it. An acquaintance that lasted from Christmas to Boxing Day, until I was sure that he still had a pretty messy and heavy situation with his ex “.

Sammy’s career began in resorts: this is where the boy cuts his teeth working the summer seasons and beginning to develop those communicative fingers that will later help him in his career as a vocalist where he is known by the name “Sammy The Voice“. At the same time she also worked as a model: her sculpted physique did not go unnoticed and Sammy has lent his face to several advertising campaigns it is fashionable. At the same time he made his way into the world of event planning, also becoming a well known vocalist. Thanks to its beauty it was awarded the terzo place in the Mister Italia competition. Currently he has been working for the Planet One company, active in the Food and Beverage sector, and in the organization of events for six years. In particular, on Sammy’s profile we can read that with his role as Account he deals with:
“Complete organization of American Bar, Wine Bar, Champagnerie and tastings in any type of event
Study and creation of customized cocktails proposals; Promotional tours “

Sammy ex single of Temptation Island must have liked the production: so much so that he was recalled to participate in Men and Women of Maria De Filipppi where he declared himself for the tronista Giovanna Abate, with whom a feeling is immediately established. The two have an acquaintance made of ups and downs: if on the one hand it seems that Sammy at times is not completely interested in Giovanna, on the other hand the girl attacks him and asks him to clarify his position as a father and relations with her. former. In fact, it seems that Sammy has passed the lockdown from Covid-19 in the company of his son Christian and the mother of the child, his ex. After a few quarrels and a certain impasse in the relationship, Giovanna in the episode broadcast on 11 May writes a letter to Sammy basically asking him to start again, eliminating conflicts and confirming the interest of the tronista towards the boy. These are some of his words: “Precisely because I like you, I want to try to keep going. For my part you will find the road cleared ” Sammy replied that “I’m happy and it was what I wanted from the start”.

The knowledge between the two therefore seems to be able to leave now towards a new starting point. Sammy and Giovanna continue in the course of the episodes between ups and downs: quarrels and squabbles that have always characterized their relationship are brought to exasperation especially when Giovanna goes to pick up Alessandro Graziani. In the episode of May 27 when the alchemist, Davide Basolo, reveals his identity, Sammy also enters into controversy with him. Furthermore, in the episode of June 4, Sammy and Davide were the protagonists of a quarrel involving Giovanna’s former suitor, Alessandro Graziani. In fact, De Filippi asked the journalist Gabriele Parpiglia, source of the news of gossip, to question Graziani himself on the matter concerning the separation of Pago from Serena Enardu: it is Gabriele himself during the episode who asks Alessandro if the relationship was there or not! From Alessandro’s statements, we know that the relationship with Serena was not just a gossip but it materialized in four months of relationship between the two, but Alessandro declares that it was prior to his participation in the broadcast.

Sammy Hassan was Giovanna Abate’s choice. In the episode recorded on June 3, 2020 Giovanna chose Sammy, with whom she has always had a stormy but full of passion relationship. Sammy replied “I want a person who gives me stability, who understands me and who doesn’t want to get into a fight. With this I am not telling you that it is my fault or yours, I want a person who knows how to appreciate my strengths but also the billions of defects that I think I have. Believe it or not I have always expressed my doubts and perplexities that did not make me go quickly in your direction [….] we missed that joint. My answer is no because I always feel attacked and always judged ”.

At this point Giovanna begins to speak saying “Now you take all the insults and the responsibility to make me believe it until the end, to leave me confused”. Sammy replied “I told you a thousand times that mine would be a no “. At this point Sammy gets up and leaves.

A few minutes later it becomes clear that this was only one Sammy’s joke. He appears on the video during an external and tells him “when we are like this there is no one” and then the words “ours is magic so my answer is YES”. At this point Sammy comes back with a bouquet of red roses and saying “sorry”.

Sammy and Giovanna broke up

The relationship between Giovanna and Sammy ended later not even a month from the choice of the tronista and the “yes” of the suitor. Already shortly after the end of the broadcast the two had been apart precisely because of the contrasting characters and perhaps even gods feelings. Eventually Giovanna and Sammy decided to break up. Sammy gave an interview on Men and Women Magazine in which he states “Giovanna is a beautiful person, but there are too many differences between us. I don’t accept anyone saying that I said yes for business“. Sammy himself after many rumors of rupture confirms that the end of the story dates back to first week of July, but only after a few days they decided to outsource it once they understood that they had reached total closure. From the interview it is evident that Giovanna and Sammy were looking for different things from their relationship and Sammy declared that he would have liked to live it “more calmly and lightly“. He says that falling in love did not start and the constant quarrels combined with the distance did not help.

Sammy Hassan during Temptation Island 2019 came very close to Cristina Incorvaia. The girl she had been living with David Scarantino for months and, having arrived in the reality show, she immediately opened up to the handsome suitor.