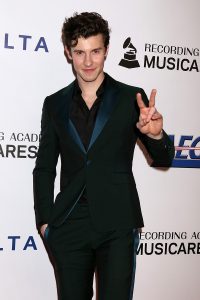 How rich is Shawn Mendes?

The internet gave Shawn Mendes his star status today. Because the Vine platform made him known alongside Twitter and YouTube. The Canadian of English and Portuguese descent published a cover version of Adele’s song “Hometown Glory” online in 2012, which earned him a huge number of clicks. That got Island Records to sign Shawn, who was just 15 years old. The current star was able to reach 3.8 million fans at the beginning of his career on Vine. Since then, the singer has also made a lot of money. The cherished Shawn Mendes’ net worth is € 35 million.

Great success with “Life of the Party”

So it wasn’t the classic media in the form of television or radio that made today’s successes possible. In the summer of 2014, the pop star finally released his first song called “Life of the Party”. No other song was shared more frequently on Twitter in the week that song was released. In addition, Shawn was able to land not only in the charts of his home country, but also in the US charts with this production.

In the world-famous Billboard Hot 100, he made it straight to the 24th place. At the time, Shawn Mendes was the youngest artist who could achieve such a high ranking with his debut song. Shawn Mendes was even internationally successful with his hit in countries like Sweden and New Zealand. His success on YouTube should not let up either. His first three singles alone generated over 10 million clicks.

Little by little, other greats from the music business became aware of the Canadian, including Taylor Swift. The singer was allowed to accompany the attractive pop star on her tour across Norm America. His Guest participation in a Simon and Garfunkel cover called “Oh Cecilia” brought the artist a top 10 hit in the UK charts. Shawn Mendes’ debut album was released in April 2015. His income has grown steadily since then.

With the album “Handwritten” he made it to number 12 in the UK charts. In Portugal and Sweden, the album was even in the top 5 of the charts. Shawn Mendes’ success in the USA was even greaterwhere he, just like Justin Bieber once did, landed on pole position in the charts with his debut album at the tender age of only 16. The nomination and the win of the People’s Choice Award in the category “Favorite Breakout Artist” came as anything but surprising in January 2016.

The young Canadian won the MTV EMA Award in November of the same year as the best male artist to back up. From April to December 2017, the pop star had the great pleasure of traveling the world on his own tour. The tour bore the same name as the artist’s second LP, released in 2016, “Illuminate”. His third album followed in May 2018 (“Shawn Mendes”), which even made it to the top of the charts in a number of countries. While it was only enough for the third chart position in Germany and England, the top position in the charts was granted to the singer in the USA, Canada, Switzerland and Austria.