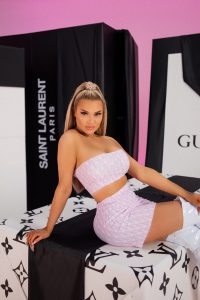 How rich is Shirin David?

The daughter of a Lithuanian mother and an Iranian father, Shirin David was born on April 11, 1995 in Hamburg. However, she spent the first years of her life in Lithuania. Even as a toddler she was interested in instruments – at first especially the piano, oboe and violin. At the same time she took ballet and dance lessons. She also successfully completed training in acting, dance and singing. At the end of March 2014, Shirin David opened her YouTube channel, which today has over 2.8 million subscribers. Thus it has one of the 50th most successful YouTube channels in Germany. She is also a successful influencer on Instagram with over 5.5 million followers. The cherished Shirin David’s net worth is 7 million euros.

However, she did not deal with the music on her YouTube channel from the start. She appeared for the first time in 2015, back then as a feature with Ado Kojo for the cover song You do not love me. At the beginning of 2016, she terminated the contract with Tube One Networks, an agency that takes care of successfully building YouTube channels. Shirin David gained further fame as Juror with HP Baxxter, Michelle and Dieter Bohlen in 2017 Germany seeks the superstar. After a successful album and bestselling perfumes, Shirin David is now a millionaire.

Shirin David’s musical career began in January 2019. The first single was called orbit and was a release from the album Supersize. The second single Give him was very successful and landed at number 1 in the German single charts.

The Album Supersize was released on September 20, 2019 and immediately rose to number 1 in the German album charts. In Austria on place 2 and in Switzerland on place 3. This made Shirin David the first German hip-hop musician with this chart position. Regarding the album, however, there was also criticism. The Fanboy Edition for just under 50 euros essentially comprised a transparent plastic carrier bag with the supersize logo.

Own perfume with DM and Douglas

In cooperation with the drugstore DM Shirin David launched her own perfume in 2017, of which, according to their own statements, over 550,000 pieces were sold. A new perfume was released in October 2019, this time with Douglas as a cooperation partner. The fragrance of the now own brand “Created by Shirin “ was able to sell more than 850,000 times by 2020 and continues to generate sales in the millions. Probably a good deal for both parties.

In August 2021, their own iced tea called “Dirtea” will be launched on the market. The first three flavors have already been determined with Busty Blueberry, Candy Shop and Wet Peach. Capital Bra has already celebrated commercial success with its own ice tea brand “Bratee”. Even in advance sales, Dirtea was able to surpass the success of Bratee with 20 million cans. Further flavors are already being planned.

the YouTube channel contains over 65 videos and over 318,000 million clicks. The channel continues to do well, although it now only uploads music videos, making of’s and other music-related videos. As a result, the channel generates around 200,000 clicks per day.

According to Social Blade, the annual income from advertisements is up to 296,000 euros, which would be tight 25,000 euros per month. The channel is considered ad-friendly, which means a higher CPM – this could make the total realistic. Essentially, however, the income that is generated outside of YouTube is decisive.

After their successful album “Supersize”, which also sold very well physically, David probably doesn’t have to worry about financial issues at first. The music streaming has also contributed and so is the YouTuberin multiple millionaire.

According to insiders are 0.0084 euros per stream quite realistic. However, the exact income cannot be precisely determined, as only Spotify discloses the numbers. Other platforms like Apple Music, Amazon or Tidal don’t do that. Thus, the following numbers refer to Spotify only.

The five most popular songs by Shirin David:

So it can be summarized that Shirin David got off to a successful start in the music career. With her own label “Juicy Money Records” she also produces her own music.