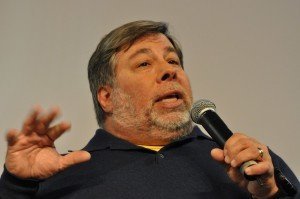 Steve Wozniak is and remains the eternal computer tinkerer and inventor. The engineer who invented the Apple and co-founded the company of the same name has always been overshadowed by the more enterprising Steve Jobs. Wozniak turned his back on Apple in 1985, but is still officially employed and regularly receives an annual salary of $ 120,000. When asked about his unfulfilled dreams, he replied: “A Tetris high score of 750,000 points on the Game Boy.”

While his former business partner with Apple became a multi-billionaire, Wozniak had to be content with “only” around 115 million dollars. However, his divorce cost him several million. Currently, the tech superstar currently owns one estimated net worth of 95 million euros. The technology fan is also the founder of his own “Segway Polo” team.

A young inventor in the fast lane

Stephan (Steve) Gary Wozniak was born on August 11, 1950 in San José, California. His father, an engineer with the aerospace company Lockheed, promoted his son’s technical talent. At the age of 11, Steve Wozniak built an amateur radio station and acquired an amateur radio license. The 13-year-old finally dared to build pocket calculators and computers. Only the expensive microchips and other components that could not be financed set limits for the young person.

Wozniak met while studying at the University of California, Berkeley in 1971 Steve Jobs who was still in high school at the time. Because of their shared interest in computers, the two became friends. In 1973 Jobs asked Wozniak for help programming a computer version of the arcade hit Pong. Jobs, who developed the game for Atari, received $ 5,000 for it. However, he gave his programmer a sum of 700 dollars, so Wozniak was fobbed off with 350 dollars. Under the name of Breakout the program later became a classic computer game.

With the Apple I, Wozniak built the first home computer in 1976. The device was a technical masterpiece, the software and hardware were solely due to Wozniak. Input via a handy typewriter keyboard was revolutionary. Together, Jobs and Wozniak finally founded the Apple Computer Company on April 1, 1976to advance the development of the calculator. The sale of the Apple I at the then unit price of 666.66 dollars financed the successor model Apple II. The Apple II was technically more sophisticated than its predecessor and was already able to display colors and graphics, at the same time it introduced the Apple DOS operating system. You were always in direct competition with Bill Gates Microsoft.

The Apple II established itself as the driving force behind the young company, which experienced economic ups and downs in the years that followed. Wozniak, who survived a plane crash in February 1981, was no longer involved in devices such as the Apple III or the Macintosh. In 1983 he returned to Apple after a break, albeit without a significant position. In 1985, Jobs and Wozniak parted ways finally; In the decades that followed, Apple became more and more identified with Steve Jobs as a person. However, Woz ‘always remained employed by Apple and is still today with employee ID # 1. His Apple’s salary is a stupid $ 120,000 a year. Tim Cook now heads Apple as the successor to Steve Jobs.

Together with co-author Gina Smith, Wozniak wrote his autobiography to dispel various rumors about himself and Apple. The book was published in September 2006 and is available in German under the title “iWoz: How I Invented the Personal Computer and Co-Founded Apple”.

Things to do to Apple

There was and is life after Apple for Wozniak. Numerous awards and academic degrees of honor honor his role as the inventor of computers and new technologies. He is in demand internationally as a speaker at conferences and events on the topics of innovation and technology. In his undertakings, in addition to a good dose of variety, these contents seem to be in the foreground – less the business success.

Wheels of Zeus (WoZ), founded by Wozniak in 2002, produced wireless GPS devices. This company was also short-lived and disappeared from the market in 2006.

After leaving Wheels of Zeus, Wozniak founded Acquicor Management together with former Apple managers Gil Amelio and Ellen Hancock. The holding company, which had neither products nor sales, mainly drew on the reputation of its founders. The company’s IPO in June 2006 generated $ 164 million in proceeds. In 2007 Acquicor Management merged with the electronics company Jazz Semiconductor.

The company, founded by Scott Jordan in 2000, specializes in the manufacture of clothing that is optimized for taking tablets, smartphones, etc. with you. Wozniak has been on the company’s advisory board since 2007.

Wozniak has been the scientific director of the hardware and software manufacturer Fusion-io since 2009, customers include Facebook and Apple, among others. In the summer of 2014 it was announced that the memory card company SanDisk would take over Fusion-io for 1.1 billion dollars.

In the second episode of the fourth season of The Big Bang Theory, the great “Woz” has a guest appearance.