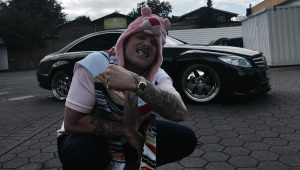 How much money does the 187 street gang have?

Many people have only known the 187 street gang around Bonez MC since “Palms made of plastic”. The album, which was created together with RAF Camora, broke numerous records and is now platinum. But the story of the Hamburg rappers Bonez MC, Gzuz, Maxwell, LX and Sa4, the sprayers Frost and Track and the producer Jambeatz goes back over 10 years. The 187 street gang has a valued one Assets of 10 million euros.

BonezMC was born in 1985 in Hamburg as John Lorenz Moser and is considered to be the head of the 187 street gang. When he was two years old, the family moved to France. They live there for a while until they come to southern Germany. The parents want Bonez to grow up protected and not have the negative influences of a big city like Hamburg. But he doesn’t really feel at home there and always emphasizes that he is actually a hamburger. Bonez’s father is very musical, his uncle is the guitarist of the punk band “The Stranglers”. At school, Bonez was noticed rather negatively, but had a talent for basketball. Therefore, he was sent to a sports boarding school. The basketball career only lasted until puberty, which he then more likely to be Drugs than interested in sports.

The beginnings of the 187 street gang

There are always visits to the youth welfare office, as from 14 he repeatedly attracts attention with petty crimes. This doesn’t bother his left-wing parents as long as he steals things from large chains. But it shouldn’t harm individuals. At the age of 18 he moved back to Hamburg with his girlfriend. He meets Gzuz on the basketball court and the two become good friends. After they both try their hand at graffiti, they start rapping. In 2006 Bonez MC first made a name for itself musically and released the EP “187 Strassen Gang”. In 2007 the collaboration album “Zwei Assis trumpfen auf” followed with AchtVier, who at that time was still a member of the 187s. The mixtape “More does not work” will be released in 2008 on the Hamburg label Jentown Chryme Records.

The fans have to wait until 2012 for the first solo album. “Krampfhaft Kriminell” is the first album of the 187 street gang to secure a chart position and climb to 60. The following year he teamed up with the Berlin rapper Kontra K and brought the EP “Auf Teufel komm raus” onto the market. This is followed by 2 collaboration albums with Gzuz called “High & Hungrig” and “High & Hungrig 2”. While the first part made for the first top ten placement in 2014, the second part in 2016 will be the first number 1 album of the 187s. Meanwhile the album could Gold status reach. A few months later, “Palmen aus Plastik”, a collab album with RAF Camora, was released. The album breaks numerous records and is trend-setting for the German rap scene. Not only the album but also two singles went platinum, and another single went gold.

Gzuz, who is considered the second front man of the 187s, was born on June 29, 1988 in Hamburg as Jonas Kristoffer Klauss. His father is Austrian who was looking for work as a dock worker in Hamburg and thus met Gzuz’s mother. However, the parents divorced when Gzuz was a child. From then on, he and his sister grew up with his mother in the St. Pauli district. They fascinated him from an early age Criminals in St. Pauliwho make a lot of money with their machinations. He smoked pot for the first time at the age of 13, and was withdrawn for the first time at 14. He got more and more on the wrong track and was finally arrested for robbery in 2010. Gzuz is sentenced to three years and six months in prison.

As early as 2006, he joined the 187 street gang, which during his imprisonment the “Free Gzuz Tour”And also sell merchandise with Free Gzuz sayings. After his release he released the album “High & Hungrig” together with Bonez MC, which entered the charts at number 9. On October 9th, 2015 the solo album “Ebbe & Flut” comes out, which can reach number 2 in the charts. “High & Hungrig 2” even topped this in 2016 and reached number 1 in the charts. Gzuz became even more famous because the beginners featured him on their comeback single “Ahnma”. The song climbed to number 8 in the German single charts, stayed in the charts for 39 weeks and was awarded platinum.

Maxwell Kwabena was born on March 23, 1993 in Hamburg and grew up in the Hohenfelde district. He was interested in rap at a young age and got to know Bonez and Gzuz, but they lost sight of each other. When they meet again a few years later, Bonez brings him to the street gang. He made his debut on the album “High & Hungrig” by Bonez MC and Gzuz. In 2015 he collaborated with LX and released the album “Obststand”. It rises to number 5 on the album charts, and numerous videos are clicked millions of times. In 2016 he is part of the song “Without My Team” by RAF Camora and Bonez MC, which went platinum. In addition, he records the EP “Safari”, which is only physically available in the Amazon box of “Tannen aus Plastik”, a re-release of “Palmen aus Plastik”. Thanks to mp3 downloads and streams, it can still enter 65th place. In 2017 the first album “Kohldampf” followed, which reached number 2 in the charts.

LX’s real name is Alexander Hutzler and was born on September 3, 1986 in Hamburg. He grew up in the large prefabricated housing estate Osdorfer Born, where he had to learn to assert himself. Even at school he repeatedly caused problems, and he broke off the following training courses one after the other. He wrote his first lines in 2006, while also working black. Little by little he gets more and more into trouble. At the age of 25 he moved back in with his mother, because his life is getting more and more out of hand. During this time he began to concentrate more intensely on rapping and uploaded his first songs to the Internet. In 2014 he finally met Bonez MC, who was impressed by him and invited him to work on the third 187 Strassenbande sampler.

LX gets along particularly well with member Maxwell and the two do something together. The Collaboalbum “Obststand” will be released in 2015 and reached number 5 on the charts. However, around a month after this success, he was arrested for several violent crimes. He got 22 months and had to watch the 187 street gang emerge from the cell. However, he used his outdoor activity again and again to appear in his colleagues’ songs and music videos. He has been at large again since November 2016.

Little is known about Sa4. He has been with the 187 Strassenbande since the beginning, but rather stayed in the background. In 2009 he released the album “Undercover” free on the internet. Although he was always featured on his colleagues’ samplers and albums, fans had to wait until 2016 for new solo music. In the premium box of “High & Hungrig 2” was the EP “Nebensache”.

In addition to their solo careers and collab albums, samplers by the 187 street gang come onto the market at regular intervals. The first was released in 2009 and contained 21 songs. The second part was released in 2001, contained 21 tracks and guest contributions by, among others, Haftbefehl, Joe Rilla and Said. However, the first two parts were not commercially successful. That should change with sampler number three. The sampler number 3, released in 2015, reached number 2 on the German album charts. For the Sampler number 4 the 187 street gang came up with something special. They published it on July 18. 2017, a Tuesday. Usually albums are released on a Friday as sales are always Friday through Friday. For the 187s, however, the placement is apparently not the most important thing, they also do without a premium box. The fans still storm the stores for the release and help achieve the next success. The sampler once again stormed to number 1 in the charts, displacing Kollegah to number 2, who was promoting his best of album “Legacy” for months.

The fortune of the 187 street gang

Over the past few years there has been considerable hype surrounding the 187 street gang. This is of course also reflected in their wealth, which comes mainly from their music, but also from their own tattoo shop. Posted in November 2016 Bonez MC a photo of his account balance with just over 116,000 euros thereon. However, that should not be the entire fortune, after all, he already stated in an interview in July 2017 millionaire to be. We show you how the fortune of the 187 street gang comes together.

The 187 street gang was able to collect the majority of its income through its musical successes. So they have already secured the top of the charts twice and entered the top 3 several times. They have also won numerous gold and platinum awards for singles and albums. There are also numerous tours and festival appearances that bring a lot into the Rinse the street gang tills.

The YouTube channel of the 187 Strassenbande is one of the most successful Deutschrap channels and has around one million subscribers. Since joining on February 29, 2008, over 570 million views have been collected. The most successful video is “Plamen aus Plastik” with over 60 million clicks, “Without my team” is similarly successful. Bonez stated that he earned around 10,000 euros for every 10 million clicks. Thus the 187 street gang could do about one Earn half a million euros through YouTube. There are also streaming portals such as Spotify or Apple Music, on which the 187s are also often clicked.

On July 18, 2016, the 187 Strassenbande opened their own Tattoo studio with the name 187 Ink. In addition to tattoos, you can also buy merchandise from the 187s there. Hundreds of fans came to the opening of the studio in Hamburg at Grünen Jäger 14 and stood in line for hours. So this studio should generate some more money for the members of the 187 street gang.