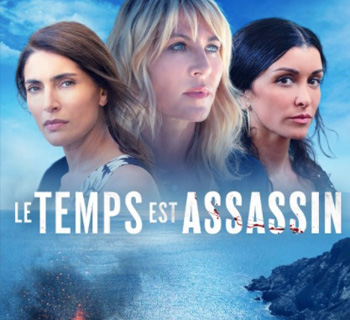 The hour of truth (le temps est assassin) it’s a French television series thriller / drama genre. This miniseries in 8 episodes aired on Canale 5 from August 30th, it is based on the novel of the same name by Michel Bussi, and tells of a mysterious letter that upsets the life of Clotilde Idrissi and her family.

In the year 1994, at the age of only fifteen, the young woman Clotilde Idrissi is the protagonist of a very bad road accident that took place in the Revellata peninsula of Corsica: a car driving at insane speed rams the car of Clotilde and her family into a ravine. Due to that tragic and fatal crash Clotilde helplessly witnesses the death of her family, mother, father and brother Nicolas, only 18 years old. After twenty-seven years since that tragic day, Clotilde decides to return to the place of what happened together with her husband and her teenage daughter to exorcise that bad event now belonging to the past. Since then, however, they have begun to manifest themselves strange accidents until the day Clotilde receives a mysterious letter signed in her name of his mother, the woman he believed he lost in the accident 27 years earlier. For this reason Clotilde decides to unravel the mystery and understand who is behind all the incidents and that letter received. The book from which this TV series is taken is the work of the same name by Michel Bussi.

Corsica, summer 1994. Clotilde spends the holidays with her father Paul, her mother Palma and her brother Nicolas. Paul goes back and forth to Corsica to work in a hotel he is building. Two weeks after their arrival, this family’s life will change in a car accident. Clotilde will be the only survivor of this tragedy. In 2019, Clotilde married and the mother of a daughter Valentine, is still haunted by the nightmares of her past. He hasn’t set foot in Corsica for 25 years. Forced to return because her daughter had a discomfort during the holidays, Clotilde is confronted with the reunification with the country and with grandparents. In his childhood home he discovers a letter written by his mother’s hand. Is your mother still alive?

In 1994, Palma (Clotilde’s mother) was nearly hit by a black pickup truck while her husband, Paul, received threats. In truth, Cassanu, Paul’s father, is behind this story but things seem even more complicated. A family drama unfolds as we wonder who Salomé is, a young Corsican woman who leaves messages for Paul. In 2019 Clotilde decides to recover the accident file and realizes that the car had been tampered with. He goes to his godfather César Garcia for explanations. He was, in fact, the one in charge of the car accident investigation at the time. Along the way, she almost gets run over in a car from a black van, like his mother 25 years ago. He returns to Cesar asking him for an expert report on the letter he has found, but the next day Clotilde finds his lifeless body.

The explosion of the hotel’s construction site in 1994 is of a criminal nature. Basil, Paul’s business partner, is convinced that it is behind it all Cassanu, like Palma who fears reprisals against her family. Salome still leaves mysterious messages on Paul’s answering machine. In 2019, Clotilde decides to investigate Pierre-Ange Rossi, his father’s former lawyer. Stéphane Garcia, Caesar’s son, tells him that Caesar’s death is murder disguised as suicide. Clotilde asks for a graphological analysis of the letter and discovers that Cassanu was, in 1994, ready to do anything to save his island, even at the cost of sacrificing one’s own child.

In 1994, Palm tree he discovers in front of his door some wax dolls with the effigy of his family. He feels more and more in danger. Cassanu frees himself and offers a deal to Basilio: to give up the construction of the hotel against the promise to bring Paul back to the island and to Salomé. Paul discovers a picture of her with a baby in her arms on the doorstep and hides this image. Palma is getting closer and closer to Christmas. In 2019, Clotilde’s daughter Valentine fell overboard while climbing. There his harness was cut. Now, this strange man who is always around her, rushes to her aid.

In 1994 Palma wanted to give his marriage a chance and did not succumb to the advances of Christmas, a man who lives as a hermit, a lover of nature and dolphins. After coming face to face with Palma, Salomé threatens Paul, who is forced to come and sleep with her. Back home, Paul lies to Palma, who suspects him of adultery.

In 2019, following the discovery of the letter, Clotilde finds Palma’s necklace lying on her bed. They come identify Orsu’s footprints. Jacob Schreiber, Mika’s father, who has lived in Corsica for all these years, prints old photos from 1994 thanks to which he makes a surprising discovery.

In 1994, Salomé increasingly teases Palma and threatens her. Paul confesses his past relationship with Salomé, this confession marks their breakup. Clotilde, who discovers the first outbursts of love in contact with Christmas, she reveals her feelings to him, but the latter dismisses her amused and, moreover, desperately in love with Palma.

In 2019, Palma’s body is buried. Clotilde’s grandmother provides a hairbrush that belonged to Palma to compare DNA. The verdict that it is Palma’s own body. Orsu is the number one suspect.

In 1994, Palma met Salomé’s mother, Speranza, who told her all about the baby. Humiliated, she sets off in search of Christmas. Nicolas, the brother of Clotilde, is in love with the singer Maria-Chiara. He wants to take her back to Paris with him. Palma announces to Paul that they will only see each other at the party on August 15th, after which she will return to Nice alone with the children. Clotilde realizes that her mother is not the only one in a relationship. Clotilde then decides to drown. In 2019, Clotilde will see Orsu in prison.

August 15, 1994 the whole family gathers for the feast of the Virgin. Salome comes in, dressed like Palma, and asks Paul to go directly with her. Cassanu orders Palma to get up from the table. Paul, who plans to take Salome to the doctor to have her interned, drives off with her.

Mathilde Seigner veste the role of the young and unfortunate Clotilde Baron (born Idrissi), is the protagonist of the series. The French-born actress can boast three Cèsar awards in the Best Supporting Actress category. Her career includes countless participations in various successful films and more, in fact Mathilde has also worked in the world of theater and dubbing.

Caterina Murino, successful Italian actress plays the role of Palma Idrissi (nee Saccardi), or the mother of Clotilde and Nicolas. After embarking on the path of the catwalks, Caterina decides to devote herself to the world of acting becoming in fact a very good actress known both in Italy and abroad. Among the Italian productions Caterina starred in some famous successful fiction such as Don Matteo where she starred together with Nino Frassica and Therence Hill and L’isola di Pietro.

Jenifer Bartoli: Salomé Romani, a childhood friend of Paul. Jenifer is known in the entertainment world as both an actress and a successful singer. In fact, his career is more focused on the music sector but in recent years he is trying to make his way starting from 2013, taking part in the film Les Francis, including in the acting industry.

Filming for the television series began in December 2018 around the Bastia region of France.

Despite the great success achieved internationally, a second season will not be produced. The protagonist Mathilde Seigner she has in fact declared herself against giving a follow up to the miniseries, for her the role of Clotilde is too restrictive and she has also declared that the second seasons are not always successful, since it is very difficult to give an adequate follow-up to a great television product. Always Mathilde stated that with his character he shares tenacity and temperament.

The hour of truth (le temps est assassin) is a French TV series structured in 8 episodes lasting 52 minutes each. On channel 5, 2 episodes are broadcast in prime time at a time. The series consists of only one season (for the moment).

There tv series the hour of truth will be available in streaming on Mediaset Play as soon as the first episode is broadcast on TV. We will obviously update the article with links to the episodes.