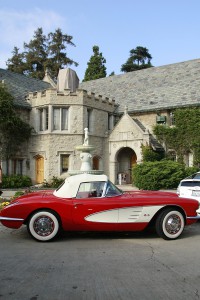 Entering the Playboy Mansion once and being able to relax in the infamous cave is not just the dream of many men. Because many women and budding Playboy Bunnies would like to see this headline-grabbing villa up close. Although access to the villa was previously only granted by invitation, this could now change. Because the famous Playboy Mansion is for sale. What should the fun cost? Of course the property is not cheap! Hugh Hefner wants an impressive 200 million US dollars for his current home. If you consider that most of the houses in the neighborhood were only sold for 50 million US dollars, it shows what value the name “Playboy” has for real estate sales – at least if a buyer is actually in spite of the horrendously high price can be found.

Incidentally, the Playboy Mansion was built in 1972 on a plot of land measuring almost 2.5. Stately 2,050 square meters of living space also await the new owner, who of course should also bring the necessary change for the maintenance of this property. The villa, which is located in the popular Holmby Hills neighborhood, has a total of 31 rooms. Incidentally, Holmby Hills belongs to the Beverly Hills district of Los Angeles, California, so buyers of the Playboy Mansion can already expect a few very illustrious neighbors. Of the 31 rooms in the villa, 8 of the rooms are bathrooms. Even a zoo is a must on this crazy property. If you want to see the whole thing from a bird’s eye view, you can simply enter “10236 Charing Cross Rd, Los Angeles, CA 90024, USA” on Google and look at the villa from above.

Is the Playboy Mansion really worth $ 200 million?

Of course, many sellers have inflated ideas about what their property is worth. But what about the Playboy Villa? Is US $ 200 million really a fair price and can it be assumed that a buyer will actually spend this amount on the property? Of course, I make it difficult to foresee that. Because the villa and the famous hell, which is connected to the pool area, need some renovations. Some critics even say that the house should actually be completely demolished, as it has hardly been renovated at all since the 1970s. So why should a buyer spend $ 200 million on a villa only to tear it down and build a new house, which of course shouldn’t be cheap either?

There is much speculation as to who the new buyer with such a large wallet might be. Most would bet on a rich sheikh from abroad for whom $ 200 million is peanuts. The Playboy Mansion is also very attractive. After all, Hugh Hefner was never the real owner of the Playboy Mansion himself! If you buy this property, you can say that you are the sole owner of this property. Because although Hugh Hefner has lived in the Playboy Mansion for a long time, technically it belongs to Playboy Enterprises, which is owned by a private equity firm called Rizvi Traverse, which in turn is actually owned by billionaire Suhail Rizvi. Hugh Hefner has an actual share of 35%.

Playboy Enterprises bought the property on which the mansion now stands in 1971 for only $ 1.1 million. If you factor in inflation, the property should be worth $ 6.45 million today. Incidentally, Hugh Hefner does not own the villa, but he also pays rent to be able to live there. In 2002 alone he is said to have paid 1.3 million US dollars in rent, with the Playboy Group itself having contributed several million US dollars for the maintenance of the property.

Hugh Hefner, on the other hand, owns a house that is not far from the Playboy Mansion on the same street and where many of the Playboy Bunnys have resided. However, it is unlikely that the Playboy maker will move in there himself. Hugh Hefner once owned the house right next to the Playboy Mansion. After his divorce in 1998, however, he had to leave this to his ex-wife Kimberly. So where will Hugh Hefner live if the Playboy Mansion does sell for the record price of $ 200 million? Here we come to the hook of the whole thing: Whoever wants to buy the property has to grant Hugh Hefner a lifelong right of residence, although Playboy will of course continue to pay rent. So there should be financial reasons behind the sale of the Playboy property.