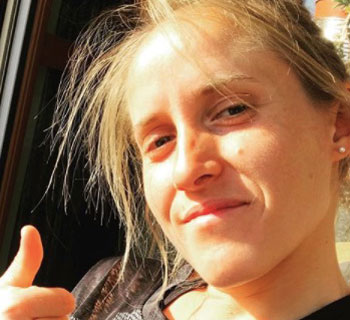 Valentina Cernoia is a midfielder of the women’s soccer team Juventus Woman and of Italian national team. She previously wore the Brescia shirt for nine years and is in fact the player with the greatest number of appearances in the history of the club.

Valentina Cernoia was born in the province of Brescia and more precisely in Manerbio. From an early age she showed her propensity for football and decided to start playing in the mixed team of the country. We know little about her parents, she is very attached to her mother who often appears with her on Instagram shots. Currently she is also a student of the Faculty of Motor Sciences in Brescia.

Valentina Cernoia is very active on social media and her Instagram profile counts more than 73 thousand followers. Valentina posts a few photos of her private life and most of these are with her mother to whom she is very attached. On the other hand, there are many photographs of the national team in black and white and blue shirts.

There football career by Valentina Cernoia begins at the tender age of eight, when he joins the AC Quinzanese team with his hometown team and plays in mixed teams for a few years until 2002. He only later passes to the fully female team of Manerbio Virtus in the city of Manerbio and he will play there for six consecutive seasons between Serie C and Serie D. In 2008 he received the proposal of the Brescia Calcio becoming in a few years one of the leaders of the team. In 2009 – 2010 he first won the championship then the Italian cup and the following year he participated in the UEFA Women’s Champions League. From the 2015 – 2016 season she was also the captain of the team, taking the place of the historic captain ELisa Zizioli as soon as the girl hangs up her boots.

In 2017 the leap into Juventus Woman women’s team where, however, he suffered a serious injury in the same year: the rupture of the cruciate ligament. He therefore made his debut with Juventus only the following spring in a match against the Sassuolo Calcio team.

In the Season 2020 – 2021 Valentina Cernoia continues to play with Juventus Woman, often proving to be decisive. On 9 May 2021 Juventus Woman won the 7th Scudetto with three days in advance, this is the 4th consecutive title.

Female soccer players receive a maximum payable salary of 30 thousand euros gross plus a reimbursement of expenses of 61 euros per day for five days a week; which become 45 during athletic training. Unfortunately, women’s football still shows incomplete regulations and a very strong difference in treatment compared to the male counterpart.

We do not know if Valentina Cernoia is engaged and she too, like many other footballers, hardly mixes private life with professional life even on Instagram. However, we found a photo published with a particular dedication, this phrase from a song by Elisa: “Come here, but also bring your eyes and heart.. ”

Among the answers there is the comment of a girl who continues the song by reporting the next phrases of the song in the comments: “Let’s see where we can get and let’s laugh together that we always laugh, always, always, but it’s never enough ..”

Valentina then dedicated an Instagram post to a girl named Giulia Crabolu on the occasion of his graduation that seems like a dedication of love: “A journey through time, yours. A journey, this, which ends here, with a great goal achieved. A path known at the end, full of nuances that you showed me and that have also become a bit mine. Thanks for letting me travel with you ..
Proud to see where you have come, by your side for a new beginning. Congratulations doctor ”.

Valentina plays with the women’s soccer team Juventus Women proudly wearing the number 7 shirt which was also Marchisio’s. With the National Female, on the other hand, the jersey number is completely different and is 21.

The National Women’s football team has been very successful with participation in the World Cup of France 2019 passing the group stage. The next international engagement is the 2021 European Championships in England while from September 2021 it has been involved in qualifying for the 2023 World Cup in Group G where they meet against Moldova and the Croatia, respectively on Friday 17 September at the ‘Nereo Rocco’ stadium in Trieste and Tuesday 21 September in Karlovac (5.30 pm). Besides Valentina Cernoia the other holders in the blue jersey are: