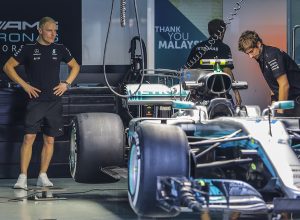 How rich is Valtteri Bottas?

Valtteri Bottas is a very successful Formula 1 racing driver from Finland. He was born on August 28, 1989 in Nastola in the south of the country. He was emerging and victorious in Formula 3 and the GP3 series before joining Formula 1 in 2013. Having arrived in Formula 1, he joined the Mercedes racing team in 2017, where Bottas earned a really good salary as a Formula 1 driver. The cherished Valtteri Bottas’ assets amount to 22 million euros. The contract with Mercedes ends in summer 2022 and the Finn will join the Alfa Romeo team with a multi-year contract.

The contract that Valtteri Bottas signed with Mercedes for the 2017 season earned him for the first time a salary of 7.5 million euros per season. Until recently, this contract was “only” extended by one additional F1 season. This means that Mercedes always keeps a back door open and can keep the Finn on a short leash. The salary is said not to have increased since 2017, although the bonuses for reaching certain placements have been increased. However, only the team itself knows what these look like.

In addition to his Formula 1 salary, Bottas also receives a lot of money from his sponsors, the Scandinavian locking system manufacturer Abloy and the British private jet rental company InsiJets. At the end of the 2018 season, however, the Finnish company Wihuri ended its long-term collaboration with Bottas after the latter had been without a race win for a year. Wihuri had already supported the Formula 1 driver financially when he was still racing in lower-class racing series. The company had paid Mercedes a million dollar amount so that the racing team would sign Valtteri Bottas.

Change and salary at Alfa Romeo

In order to step out of the shadow of longtime teammate Lewis Hamilton, the Finn will switch to Alfa Romeo in the summer of 2022. The salary is initially unknown, but he is said to have signed a multi-year contract.

The beginnings in Formula 3

Like every subsequent racing driver, Valtteri Bottas also collected first experience in karting. In 2005 he finished eighth in the Kart World Championship. A year later he switched to Formula Renault. There he won three of four races in the British Formula Renault winter series in the 2007 season. However, because he did not have a license to be counted for the championship, he was denied the title. For this he won both the Eurocup and the Northern European Cup of Formula Renault in the 2008 season.

For the 2009 season Bottas switched to Formula 3 and immediately took third place in the overall ranking. At the end of the season he won the Formula 3 Masters, the unofficial European championship in the racing class. A year later he repeated this triumph, making him the first racing driver to win the Formula 3 Masters more than once.

Bottas on the move to Formula 1

The achievements of Valtteri Bottas in Formula 3 did not go unnoticed by the teams in Formula 1 and so Bottas drew the attention of the Formula 1 teams. In early 2010 took him Williams as a test driver under contract. While continuing to compete in Formula 3, he completed numerous training sessions for Williams between 2010 and 2012. At the same time, he won the GP3 series in the 2011 season, but then decided not to take part in other racing series. Rather, he wanted to concentrate on his role as a Formula 1 test driver.

With the 2013 season, Williams hired Valtteri Bottas as a regular driver. His Formula 1 debut, which he made at the Australian Grand Prix, he finished in 14th place. He received his first World Championship points when he crossed the finish line in eighth place in the penultimate race of 2013, the US Grand Prix.

In the 2019 season, however, Valtteri Bottas won four races and became vice world champion. All he had to do was admit defeat to his Mercedes team-mate Lewis Hamilton. In 2020 he was runner-up in the world championship with two races he had won.