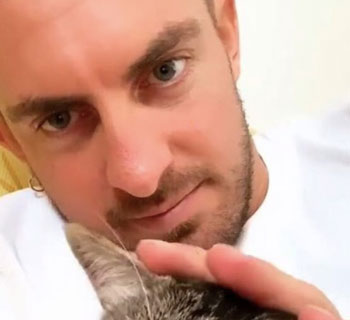 Vittorio is one speaker, a videomaker and an event presenter clubs on the Romagna Riviera and is part of one of the Temptation Island 2019 participating couples. He lives in Rimini and is 32 years old, loves sport and is a second-rate footballer, engaged to Katia Fanelli. The couple formed by Katia and Vittorio is one of the six of Temptation Island 2019. After the program, Vittorio began dating the single Vanessa for a few months. He is currently engaged to a girl from Cesena named Victoria Biguzzi.

Who is Vittorio Collina?

Vittorio Collina was born in Rimini on the fourteenth of February 1988: a sporty and dynamic boy, he made his voice and his communication skills a profession. After high school his studies continued: Vittorio in fact has attended the University of Economics of Tourismor Rimini. He has also perfected the use of languages: in fact he speaks four of them: Italian, English, French and Russian. We don’t know much about his family instead: Vittorio seems to be an only child, but at the moment we don’t have precise information about his mother, father or any siblings. Vittorio is a sporty guy: he loves the gym, fitness and we often see him in different shots taken directly from his training in the weight room and his great passion for specific training as a footballer. In 2019 he decides to participate with his girlfriend Katia Fanelli a Temptation Island 2019 conducted by Filippo Bisciglia.

Vittorio is one speaker and vocalist for various events and evenings of the Romagna Riviera. From skating competitions to the Cervellone quiz game to evenings with deejays of the Riviera: Vittorio’s voice presents different types of activities and evenings related to the Rimini Bounty. He also worked during the famous Rimini Wellness always as presenter and speaker. Vittorio is also a footballer: he plays in the second category with the Bellariva team in which he covers the role of defender. In 2016/2017 the team won the championship. Vittorio is also a dron piloti with patent: numerous photos and videos made with his drone, which we can find on his Instagram profile!

Vittorio and Katia from Temptation Island 2019 they have been engaged for almost three years. Their relationship seems to have started in fact on December two thousand and sixteen, precisely on the 21st near Christmas. The two boys have been very much in love but after several years of engagement they want to test their love: will he be able to survive temptation? Vittorio Collina’s words before participating in Temptation Island in fact they were not encouraging: “I chose to participate to measure how much Katia actually loves me, what I feel is a little more than what she feels for me“. The report ends at the end of the Temptation Island program

Vittorio in the first episode of Temptation Island immediately found himself in having to deal with his girlfriend Katia who showed exuberance and desire to have fun from the beginning. In fact, Katia has come very close to the single Giovanni: the two go out together and she really makes him a lot of appreciation between the serious and facetious! Their knowledge is dangerous: it could turn into something more. Vittorio in fact he is very worried both from the videos she saw at the bonfire of her boyfriends and from those seen at the Pinnettu. In the meantime, in fact, Vittorio has approached the singles of the program only to talk about his story with Katia. He said that he is often “forced” to have to take pictures of his partner who he would not want her to publish on social media: in fact, Katia often appears in a bikini and Vittorio’s jealousy is evident.

In the last episodes of the reality show, moreover, Vittorio would be left groped by a single of the village: it is the beautiful Vanessa Cinelli. The two have begun to relate and the woman seems to be attracting the interest of Vittorio, who would have confessed that Vanessa is mentally tempting him. Vittorio and Vanessa are starting to get very close and the danger of their attraction is evident. Videos of Vittorio’s sudden approach to Vanessa would have been seen by Katia in the famous Pinettu: how will Katia behave after the man approaches another woman?

After Temptation Island 2019, Vittorio Collina seems to be came out as a winner and as a partner of a beautiful woman: Vanessa Cinelli. In fact, the Temptation Island experience for Vittorio proved to be exciting and totally surprising. After the man saw several videos of his partner Katia together with singles, dancing and singing with the reality temptators and making appreciation especially to the single Giovanni, Vittorio soon approached Vanessa. During the comparison bonfire, in fact, Collina underlined the fact that by now the attitudes of his partner Katia no longer moved him emotions or reactions and, precisely for this reason, he decided to leave her permanently.

Vittorio is like this returned to Vanessa – who was waiting for him in the village – and together they left the reality show, convinced that they would continue their acquaintance outside. After a few months from the end of filming, despite what Katia has always stressed (namely that Vanessa was not a serious relationship), Vittorio and Cinelli continued to date. There are several photos that portray them together and it seems that the two have established a beautiful relationship. On the other hand, Katia stressed that, after returning home, she soon missed her partner: she tried to hear from him but the man did not accept a rapprochement.

There dating with single Vanessa ends after a short time, but Vittorio soon finds love in a girl from his region: her name is Victoria Biguzzi (her instagram profile is vikysuicide) and she is the owner of a Beauty Fit Center in Cesena.

The following video was made by Vittorio himself with his drone: remember that being also a Videomaker, Vittorio has the ability to make quality videos like this!

Other Competitors from Temptation Island 2019