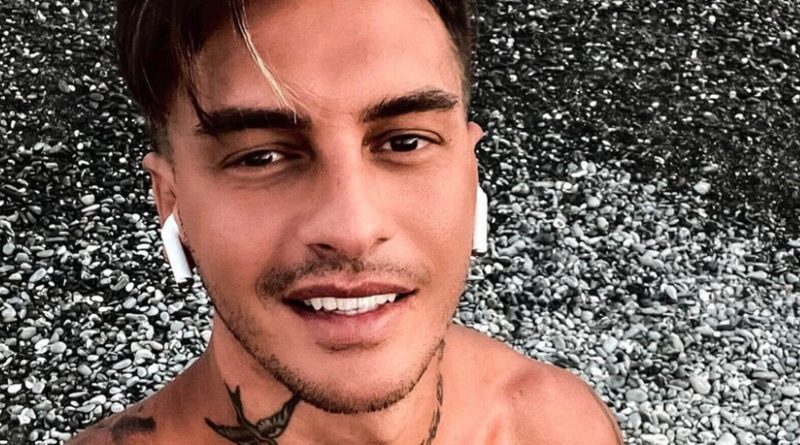 Alessandro Basciano is a 30-year-old model and ex suitor of men and women born in Genoa. Alexander was also one of the single of Temptation Island 2020 which has put the couple made up of Ciavy and Valeria. It is currently a competitor Big Brother VIP 6.

Who is Alessandro Basciano?

Alessandro Basciano was born in Genoa in June 1989, is very attached to his mother Giovanna and his sister Giorgia Nicole, model who has participated in programs such as Hi Darwin. On December 26, while in the house of the GF VIP, he loses his grandfather who passes away during the Christmas holidays.

Alessandro Basciano on Instagram he has almost 400,000 followers: the boy shares fashion shots and some photos with his son. 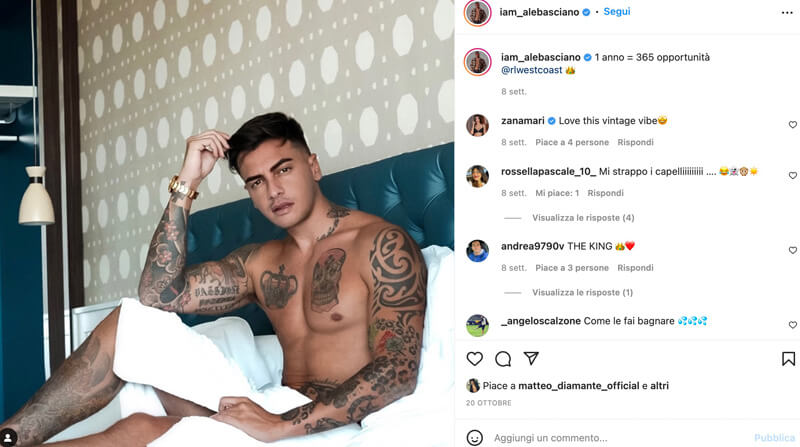 Alessandro is the father of the little one Nicolò, born in 2016 from the relationship with Clementina Deriu. His bond with his son and with Clementina made many viewers doubt his real interest in the tronista Giulia Quattrociocche, but during the program many changed their minds.

Alessandro Basciano before becoming known to the public dealt with the resale of cars in Rome at “AB Autogroup Srls“. He was also a testimonial for Dsquared2 And after the experience to Men and Women collaborates as a client with a digital agency called RL West Coast. Subsequently Alessandro Basciano enters the house of the GF VIP as official competitor.

Alessandro Basciano enter the house of Big Brother VIP in the episode of December 17th. Alessandro enters together with Federica Calemme and Eva Grimaldi.

Alessandro is immediately noticed by Sophie Codegoni and Soleil Sorge who make appreciation, in the confessional, on her beauty. It then comes very close to Soleil: the two exchange complicit glances and spend a lot of time together. After the release of Alex Belli a distraught Soleil finds relief right in Basciano: that is the beginning of something? Alessandro “disputed” and “divided” between the three girls arouses the jealousy of Jessica Selassié, breaks the balance between Sophie and Gianmaria Antinolfi who break up.

After “Bewitched” the women of the house at the end Alessandro approaches Sophie: the girl seems very taken by Alessandro, and after a few days of complicity the two exchange a kiss. Sophie had reassured Jessica, who was also fascinated by Alessandro, that he would prefer to stay with her and leave them free. Shortly after the kiss, arousing the reactions of those who saw it fake towards Jessica. Meanwhile Alessandro continues to create dynamics in the group as he continues to do steady couple with Sophie. Jessica has eyes only for him and Alessandro often finds himself in the center of a triangle, in the confessional he also admits that he wants to go easy on Sophie because he is not convinced that they are temperamentally compatible.

Alessandro Basciano openly flirts with Soleil: she plays with him and the boy’s sentimental situation is less and less clear. Who does he really care? Sophie or Soleil? Meanwhile, the relationship with Jessica is getting colder after Alessandro found out that he mentioned him.

The last known girlfriend of Alessandro Basciano is the model Erjona Sulejmani, famous (among other things) for being the former girlfriend of the footballer Dzemaili. The two were together from spring 2021 to September and broke up, it seems, by the will of the girl. In the past Alessandro has had other famous flirts: with Martina Nasoni, former winner of the GF VIP and with Francesca Brambilla, another bonas di Avanti.

To Men and Women, Alessandro woos Giulia Quattrociocche, who is immediately fascinated by Alessandro’s good looks. Giulia, however, is wary of him, judging him as “the beauty of the school” who wants to impress a normal girl, and criticism arrives for his decision to take her to the pool at the second meeting. One of the suitors with whom Alessandro challenges for Giulia is Daniele Schiavon of whom Alessandro is very jealous, so much so that he leaves the broadcast for the attention given by Giulia to his rival.

In the end, Alessandro is not chosen by Giulia, who prefers Daniele, arousing the disappointment of a large part of the public who cheered for Alessandro. And now there are those who wonder if Alessandro could be a next tronista of the broadcast.

Alessandro Basciano was one of the singles on the show Temptation Island 2020 broadcast on Canale 5. Alessandro lived in the village of his girlfriends, trying to meet them. On the other hand, Alessandro was much appreciated by the public for his character and his grace. During the first episode of Temptation Island 2020 we observed Alessandro approaching Valeria Liberati, companion of the Roman PR Ciavy. In the second episode the single Alexander he continued to forge a deep bond with Valeria who began to look at him with different eyes, the single man even organized a dinner on the beach in honor of the girl, who was pleasantly surprised. The two, during the third episode of Temptation Island, appear increasingly linked. Valeria, in fact, admits that the single Alexander he would like to kiss her, but she still has to clarify his feelings. Confess not having kissed Alexander, out of respect for Ciavy. During the second video they show to Ciavy, Alessandro says “kiss me” to his girlfriend Valeria, who appears very torn and tries to resist until the end. After Valeria’s refusal, Alessandro looks Valeria in the eyes and asks her: “Would you like to kiss me?”. Valeria does not respond and the two seem to be in a stalemate. Alessandro is visibly annoyed by the behavior of Valeria, the two then both enter the home of singles. Valeria then convinces the single Alessandro to succeed and the two cuddle in the darkness of the night in front of the cameras.

After the confrontation bonfire and the release of Ciavy and Valeria as separated, Alessandro gave an interview to Men and Women Magazine in which he confirms the understanding born during the reality show. In fact, Alessandro declared “getting close to Valeria was natural when I heard her talk about the couple ”and adds“ I think I managed to make her open her eyes and rediscover the desire to look for herself without conditioning ”. Alessandro confessed that “there was a lot of physical contact but there tuning it was above all mental “. On the relationship between Valeria and Ciavy, Alessandro said he never told her to leave Ciavy, but to choose what was best for her. Between Alessandro and Valeria though love doesn’t seem to have broken out, in fact he himself defines the relationship as “a beautiful affection”.

After the end of the reality show Alessandro did not go out with Valeria who instead is resenting and seeing Ciavy again even if the two have not yet returned together.