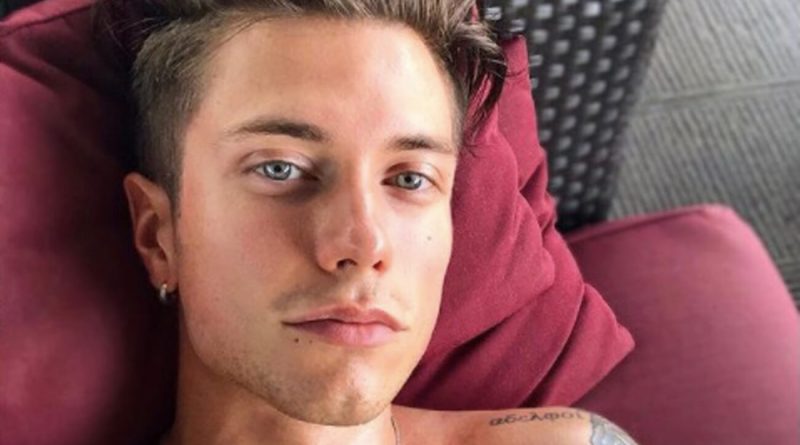 Benjamin Mascolo, also known as Benji and B3n, is a 28-year-old singer from Modena, former member of the duo Benji and Fede with Federico Rossi. After the end of their collaboration in 2020, Benjamin returns to music with the new pseudonym of B3N and is the protagonist of the domentario Breathe well. He is engaged to the actress and model Bella Thorne.

Who is Benjamin Mascolo?

Benjamin Mascolo was born on October 20, 1993 in Modena. His father Alfonso is Italian, while his mother Jocelyn is Australian. From an early age, Benjamin and his brother Alexander Mascolo they have the opportunity to travel the world with their family. The duo Benji & Fede was born while Benji is in Australia for study reasons (Benji graduated from Rosny College in Hobart, Tasmania): he was the December 20, 2010 when the kids meet on Facebook. After meeting on Facebook, the two boys gave life to the duo, which guaranteed them great notoriety with four assets, two of which platinum and one gold, and 18 singles. The duo in 2020 decides to separate to continue their solo careers. In the course of 2021, a documentary produced by Amazon Prime is planned on the life of Benji and on the episode that most marked him in his life: the disease. The documentary is called Benji: Breathe

Benji is a great friend Silvia Provvedi, former of Fabrizio Corona and former competitor of Big Brother Vip 3 and is engaged to the actress Bella Thorne, with whom he could get married soon.

Benji at 21 have had a rare disease (pulmonary histocyst) caused by a wrong lifestyle and too much smoking. As Benjamin stated:

Since that time Benjamin has adopted a healthy lifestyle, he quit smoking and swore he would never touch a cigarette again.

Benjiamin alias B3N has almost 2 Million Followers on Instagram: after the great popularity obtained in Italy Benjiamin has also become famous abroad for his relationship with Bella Thorne. 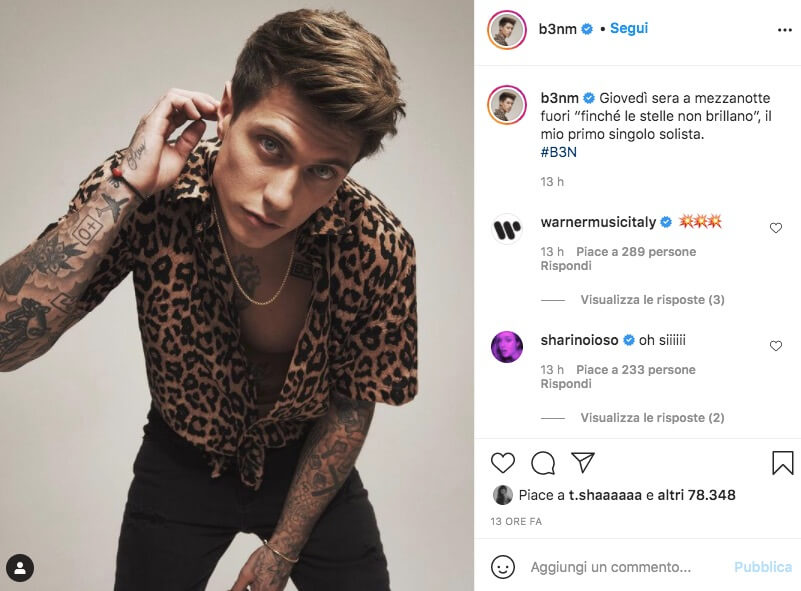 Career: the beginnings of Benji & Fede

After having known, via Facebook, Federico Rossi, the two boys make up the singing duo Benji & Fede. The group begins its journey by publishing cover videos on Facebook, collecting more and more followers. In 2014 they are proposed as New Proposal at the Sanremo Festival 2015, without passing the selections.

The numerous views they collect on Facebook make them noticed on a national radio, which offers them to start a tour in the Italian squares. It is during this tour that their dream comes true: they are in fact noticed by a talent scout from Warner Music Italy who gets the kids to sign their first record deal. They therefore participate in the Coca Cola Summer Festival and record their first album, “20:05”(Like the time when Federico Rossi sent the message on Facebook to Benjamin Mascolo proposing him to form a duo) which goes platinum.

In 2016 Benji & Fede finally participate in Sanremo as New Proposal with song “Eres Mia”, a song that will become one of the duo’s greatest hits, and subsequently publish their autobiographical book entitled “It is forbidden to stop dreaming“. In the same year Benji & Fede released their second album, “0+“, Which reaches the very prestigious milestone of a double platinum record. In 2017 they release the song “On Demand” together with rapper Shade.

In 2018 their third album is released, “We are just noise”, that becomes Gold Record in just a week. Benjamin also founded his own clothing brand, “The penguin Industry “, also known to young people for iPhone and Smartphone covers.

In 2019 Benji & Fede release their latest album, Good Vibes, which contains hits such as “Dove e When” (which in the video stars Giulia Belmonte, girlfriend of Stash) and “Sale”, in collaboration with Shari.

The separation from Faith: the career as a soloist and as an actor

On February 17, 2020, the duo announced, via Facebook, the separation of the group, causing bewilderment and disappointment among fans. The separation should have materialized on the occasion of a final mega-concert, initially scheduled for May 3, 2020 at the Verona Arena and then postponed to a later date due to the COVID-19 epidemic. The reasons for the separation are not certain: there are those who believe that the two intend to pursue solo careers, but many speculate that the cause is to be found in the relationship between Benjamin Mascolo and the actress Bella Thorne, with whom a marriage would be in sight. Federico Rossi is also engaged to Paola di Benedetto.

February 26, 2021 Benjiamin Mascolo launches his first solo album under the pseudonym of B3N: the album is called California and is produced by Warner Music.

On November 12, 2021, the documentary dedicated to him made by Amazon Prime Video comes out: His name is Ben Respira, and talks about the life of Benjiamin Mascolo starting from the rare lung disease that he suffers from and which theoretically would never have allowed him to run. Ben currently runs the marathon, the documentary talks about strength and his battle through music and the love for his girlfriend and future wife Bella Thorne. 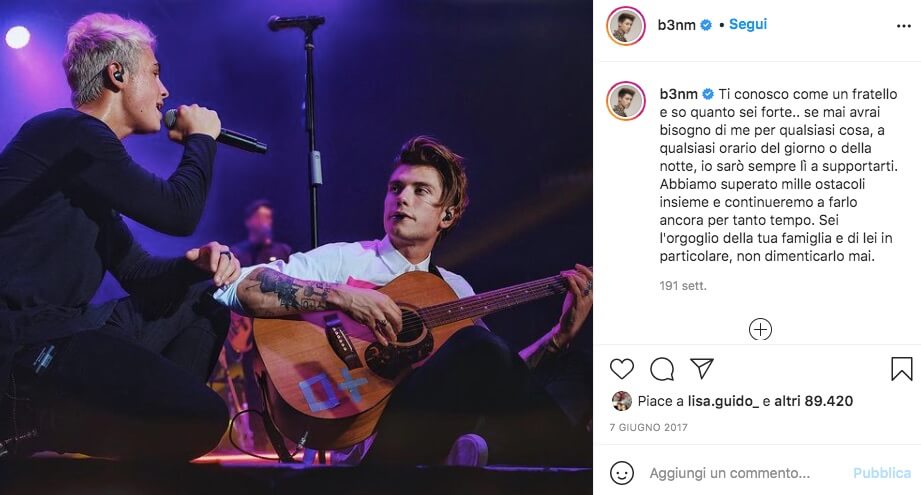 Before his romance with Bella Thorne, Benjamin Mascolo ended up at the center of Gossip for a previous relationship with the actress Demetra Avincola. After posting one of them on Instagram photos in Amsterdam, interviewed by Silvia Toffanin to Verissimo, Benjamin had confirmed that he was linked to the actress. The announcement of the breakup between the two was given by Benji himself on his Instagram profile, in the summer of 2018.

Benji’s great love came after meeting the American actress Bella Thorne, which Benji often visits in the United States. The relationship between Benji and Bella is very solid but, at the same time, particular: Benji, in previous relationships, has always been monogamous, while Bella has always declared herself pansexual, bisexual and polygamous, and has been the protagonist of some hard movie which he made as a director. Just while participating in a gay pride, together with Federico Rossi, Benji confirmed that Bella is bisexual.

Benji met Bella through Instagram: it seems that nel 2016 Bella took the initiative by commenting on the boy’s photos. Ltheir relationship was announced to the world through the photo of their kiss at Coachella festival, published on social media. It seems that their love was born right during Coachella, when the two lived in close contact for an entire week.

Bella first published a Benji’s photo on your official profile, but to delete it mysteriously a few minutes later. Around the same time, a hacker stole some private pictures from Bella’s Snapchat profile, demanding a ransom for not publishing them: Benji helped his girlfriend by posting these screenshots on his social channels. Not intending to submit to blackmail, Bella has decided to publish her own intimate photos before the hacker did. Their relationship continues to flourish, so much so that last January Bella posted a photo of Benji on her Instagram profile, announcing the arrival of a great announcement: le engagement rings emoji they leave no room for many interpretations! 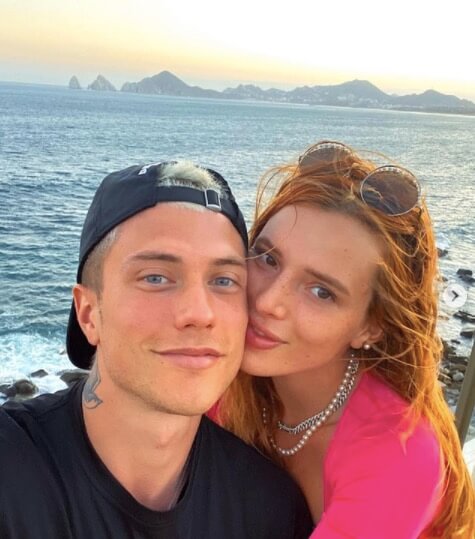