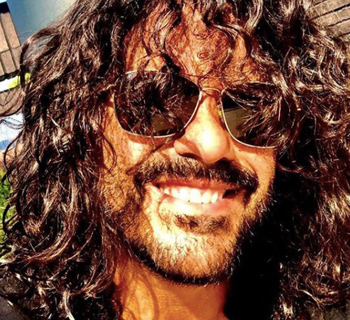 Francesco Renga, is an Italian singer-songwriter who triumphed at the 55th Sanremo Festival with the song “Angelo”, released 8 studio albums and collaborated with, among others, Patti Smith. He is one of the judges of All Together Now with Rita Pavone, Anna Tatangelo and Michelle Hunziker. Francesco Renga participates in Sanremo 2021 with the song “When I Find You”, ranking twenty-second in the final standings.

Pierfrancesco Renga, at the registry office Francesco Renga, was born in Udine, where he lived for two years until the family had to move to Brescia due to the work of his father Salvatorico, a Marshal of the Guardia di Finanza. He has a twin sister Paola to whom he is very attached and who has given birth to a cultural association called Officina Creativa. He approached singing when he was only 16 years old. He participated in the “Deskomusic” competition with Modus Vivendi, a group founded with his friends.

Francesco Renga during the same competition he meets Omar Pedrini, Diego Galeri, Enrico Ghedi, and Pietro Paolo Pettenadu of the band Precious Time with whom he forms a strong friendship and a beautiful artistic relationship, so much so that he becomes a member. Precious Time change their name and under the nickname Timoria they win the second edition of Deskomusic. In 1990 the group released the first official album called “Colori che explolo” and immediately became a hit at European level. The following year they participate in the Sanremo Festival in which they win the Critics’ Prize – established for the occasion – which immediately catapults them into the Italian artistic firmament. “Rhythm and pain” (1991) and “Stories to live” (1992) are released with more decisive and rock sounds and a concept album “Viaggio senza vento” (1993). Thus the first recognitions arrive: gold record thanks to “2020 Speedball” (1995) and two years later “Eta Beta” of 1997 which seems to mark the end of the lucky period for the band due to disagreements between Francesco Renga and Omar Pedrini . Renga in fact officially leaves the group at the end of 1998, with the collection “Senzatempo (ten years)”.

Francesco Renga turns to Fabrizio Barbacci, former producer of Gianna Nannini and Negrita, to work on his self-titled album, “Francesco Renga” which comes out in 2000. In 2001 he stands out as a usual by participating in the Sanremo Festival with the single “Tell me …” which earned him the Critics’ Prize. Followed by “Tracce” (2002), released simultaneously with his participation in the Ariston, and “Camere con vista” in 2004. Three years later the artist’s fourth album, “Iron and cardboard” and the first book ” Come mi come ”which is an extension of the CD, in fact the chapters in the book have the same names as the songs and are arranged in the same order. The year 2008 is the year of great and important duets: the first with the Sardinian group Tazenda, and the second with Irene Grandi and Patti Smith in the song “Birima” in support of a humanitarian project in Senegal.

In 2009 comes the lyrical turning point: accompanied by soprano Daniela Dessì participates in the Sanremo Festival with “Man without age”, a quote from the famous opera by Puccini, Turandot. In the same year he collaborated with another famous Italian singer, Claudio Baglioni, in the song “Lungo il viaggio”. Together with Ligabue, Elisa, Jovanotti, Laura Pausini and Tiziano Ferro, she records the single “Domani 21 / 4.2009″, made for charity following the 2009 L’Aquila earthquake. Important prizes arrive such as platinum for the album ” Orchestraevoce ”(2009) and the gold record for the single“ A beautiful day ”taken from the homonymous album. In 2013 he released “Razza bastarda” a film by Alessandro Gassmann to which he contributes with the song “La vita possibile”.

The following year he performed on the Ariston stage with two songs, “A one block from you” and “Vivendo ora” written by Elisa and also ducts with Kekko from Modà. Thus comes the sixth album, which debuts at the top of the charts and becomes gold record. In April of the same year he also made his debut on TV becoming the judge of “Amici di Maria De Filippi” together with Loredana Bertè and Sabrina Ferilli. In 2016 he returned to the studio to record his seventh album “I’ll write your name”, which sees important collaborations: Tony Maiello, Fortunato Zampaglione, Ermal Meta, Francesco Gabbani and Nek. He leaves for a tour with Max Pezzali and Nek and together with them, with the participation of Claudio Baglioni, he sings “Strada fare” at the 68th edition of Sanremo. He also takes part in the 69th Sanremo Festival with “Aspetto che torni” contained in the album “The other half”.

In 2005 Francesco Renga participates in the Sanremo Festival, conducted by Paolo Bonolis, flanked by Antonella Clerici and Federica Felini. Francesco wins the festival with the famous song Angel.

Francesco Renga participated in the 71st edition of Sanremo Festival 2021 with his title track “When I Find You”, written by Dardust. For Francis this is a moment of rebirth, he declared in fact:

Sanremo thus becomes the very symbol of a restart of the entertainment world and a sign of hope: the hope that this nightmare can end as soon as possible.

In the evening dedicated to duets and covers of Sanremo 2021, Francesco Renga sings “One More Reason” by Ornella Vanoni. Sing the cover in duet from CasadiLego, the winner of X Factor 2020.

Francesco Renga is ranked twenty-second in the final classification of the Festival. 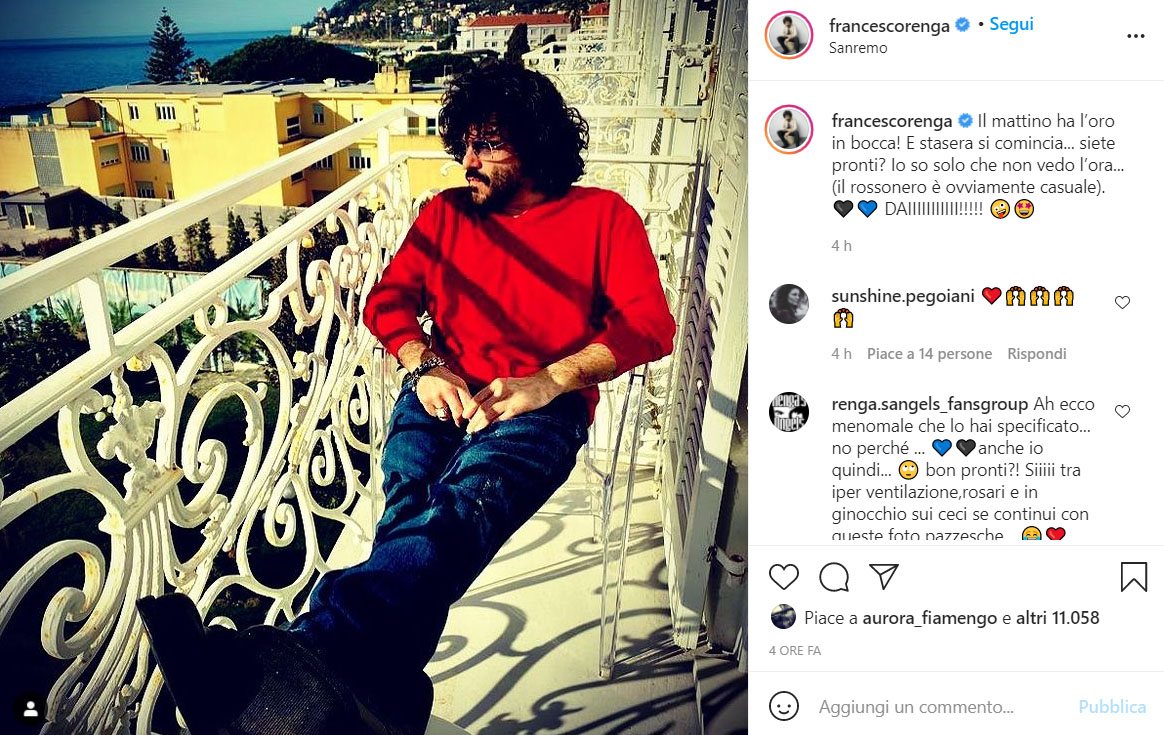 Text When I Find You Francesco Renga

Look, my city is sleepless
And he stopped dreaming
How come no one admits it now
People who cut the shadows
While the traffic still fills up
Immense spaces of solitude

This time I have the impression
Hope has changed the mood
And my head doesn’t want to know any more
To stay still and I still continue to walk
Your eyes also get wet, maybe it’s raining
And the look that follows the path of a dog
And it turns out that
As always, I forget
I forget about you
I always forget
But then I find you again
Always if I look at myself
And there is nothing around

You are the expected amazement, a desire
The truth in an imaginary world
Always always
They blend perfectly
My joys
Inevitably
Always always
I always find them all
Only when I find you

This city is confusing
Of lights always on
They say he will be calm again at the end of the month
I always out of season
And your head doesn’t want to know any more
To stay still and that silence inside makes noise
Suddenly I start breathing again
One room, two chairs, dinner, a movie
What’s the ending?

As always, I forget
I forget about you
I always forget
But then I find you again
Always if I look at myself
And there is nothing around
You are the expected amazement, a desire
A new sound among a thousand notes in flight
Always always
They blend perfectly
My joys
Inevitably
Always always
I always find them all
Only when I find you

You sleeping on the sofa
When it stays on your hands
Your scent
Your stuff out of place
Those shoes on the stairs
They take me to you
As always, I forget
I forget about you
I always forget
But then I find you again
Always if I look at myself
And there is nothing around
You are the expected amazement, a desire
The wonder of each new day
Always always
They blend perfectly
My joys
Inevitably
Always always
I always find them all
Only when I find you

Only when I find
I find you

Francesco Renga has two children, 14-year-old Jolanda and 14-year-old Leonardo with his former partner, actress and presenter Ambra Angiolini. It is to her that Francesco Renga dedicates the song “Stay with me”, a song from his album “A beautiful day”. The couple separated in 2015, after 11 years of relationship, for no apparent reason. On the separation Renga declared: “Ambra and I had the intelligence to realize that the moment had come when, in order not to implode the situation, it was necessary to throw the heart beyond the obstacle, for responsibility. against a family that still continues to exist. Arguing, getting hurt, can be gratifying in the moment but in the long run it destroys everything “. For several years is in a relationship with Diana Poloni, a human resources manager from Brescia, but their relationship was made official only in 2019 as it was born as a beautiful friendship.

Currently Francesco Renga she has 450,000 followers on her official Instagram profile where she shows off her characteristic wild hair, photos of her little dog Bugo, photos of travels and cooked dishes, cooking being a great passion of hers. Francesco is very reserved and does not often publish photos of loved ones, in fact we only find some souvenir photos of Leo and Jolanda as children. 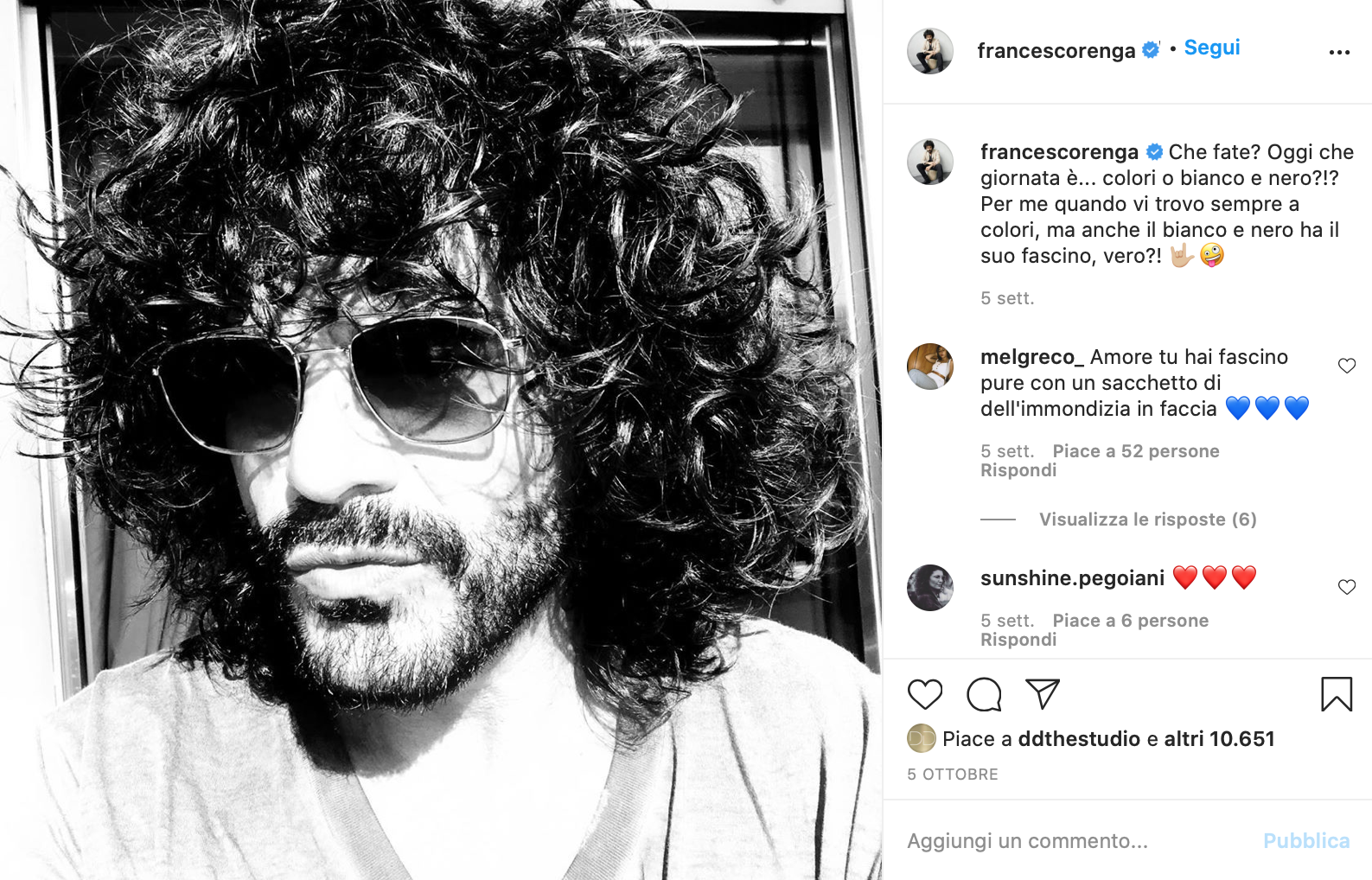